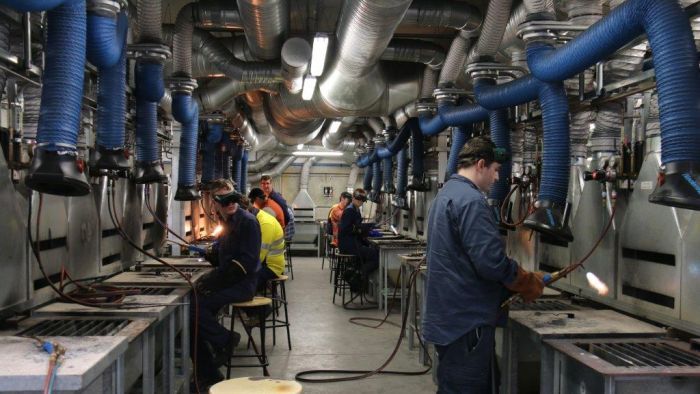 The tradies hard at work for the welding competition.

Low-paid workers will receive an extra $21.60 a week after a decision to increase the minimum wage by 3 per cent.

The decision will affect about 300,000 Australians on the minimum wage as well as about 2.2 million people on award wages.

President Justice Iain Ross said the commission decided to award a lower increase than last year due to changes in the economic environment, including the recent fall in economic growth and drop in inflation as well as tax-transfer changes.

He said the prevailing economic circumstances provided an opportunity to improve the relative living standards of the low paid, and to enable them to better meet their needs.

“We are satisfied that the level of increase we have decided upon will not lead to any adverse inflationary outcome and nor will it have any measurable negative impact on employment,” he said.

The changes will come into effect on July 1.

“Some low-paid households are plainly experiencing significant disadvantage,” he added.

Unions said the announcement was a “step in the right direction” but was only “halfway there” in making a difference to struggling workers.

The ACTU wanted a 6 per cent pay rise (about $43 a week), saying it was getting harder for people to make ends meet, especially with the casualisation of the workforce.

Despite only getting half of what unions sought, ACTU assistant secretary Liam O’Brien said the 3 per cent increase was significant in terms of closing the gap to the median wage.

“In real terms we are still seeing a significant increase,” he said.

The ACTU still believed the minimum wage should be higher.

“It is not acceptable that workers in this country who work full-time hours are on less than the poverty line.”

However, business groups argued a 6 per cent hike would destroy jobs and threaten economic growth.

The Australian Industry Group called for a rise of 2 per cent (or about $14.40 a week), while the Australian Chamber of Commerce and Industry asked that the increase not exceed 1.8 per cent.

The ACCI was disappointed with the FWC ruling, saying the “above inflation” increase put jobs at risk and threatened small businesses.

“Australia already has one of the highest minimum wages in the world, and continuously increasing minimum wages by significantly more than inflation has consequences.”

However, the federal government approved. New Industrial Relations Minister Christian Porter said the decision reflected a real increase above the 1.3 per cent inflation rate and higher than economy-wide wages growth of 2.3 per cent.

A call centre worker named Tim, who earns the minimum wage, welcomed the extra money but said it would not be enough to cover rent increases.