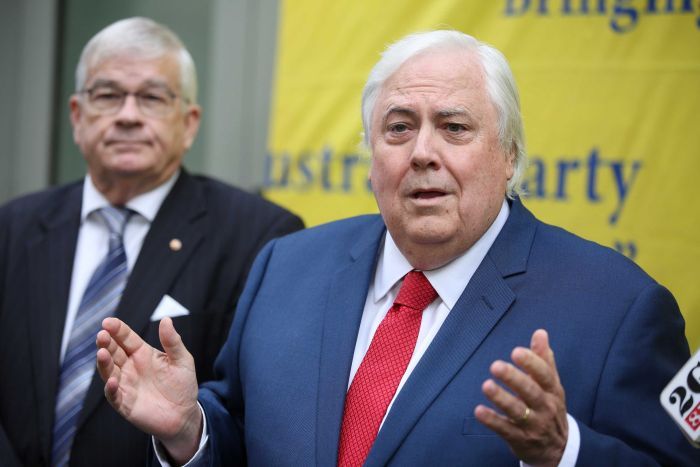 Mr Palmer’s lawyers told the High Court publishing the detail before everyone had voted in Western Australia risked influencing results, and could affect small parties like his.

But the High Court on Tuesday unanimously dismissed the case and said it would release its reasons later.

The High Court heard the practice of choosing the two most likely candidates and distributing their preferences on election night was introduced after the 1990 election, when the overall result was not known for days.

The Commonwealth told the court the method was set up to provide a prompt and certain indication of who has won the election, and that the practice was made necessary by the growing number of independents and minor parties.

Barrister David Jackson said Mr Palmer took issue with the process of two preferred candidates being nominated by the Commission two weeks before the poll.

He told the court the method sometimes got the wrong result.

“It is inherently capable of misleading potential voters,” Mr Jackson said.
A key part of Mr Palmer’s case was that there was a risk of error from AEC staff in choosing the two most likely candidates to whom preferences would be distributed on election night.

He also alleged that the identification of the two candidates suggests they are somehow endorsed by the Commission – but the Commonwealth disputed that.

Preference results only a prediction

Solicitor General Stephen Donaghue told the court the Commission was only trying to predict who might win, not who would win.

He also said that out of the last 300 selections during the 2013 and 2016 elections, only two did not include the winner.

He said that was because most selections were based on prior elections.

Mr Donaghue disputed claims voters who had not been to the polls yet in Western Australia as the east coast results were being published would be influenced. He told the court that the voters already had access to opinion polls, the first preference count and exit polls.

He said the two candidate preferred count had made results more accurate.