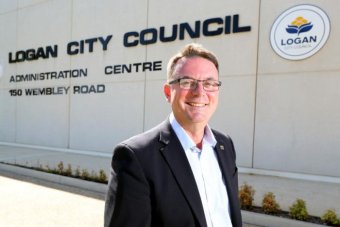 A Queensland council has been sensationally sacked after the mayor and seven councillors were charged with corruption offences.

An interim administrator will take over the reigns of Logan City Council on the outskirts of Brisbane after the remaining councillors could no longer form a quorum for meetings.

It comes as the mayor Luke Smith was also charged with drink driving after he smashed his car into a stationary vehicle and tree on his way to KFC while allegedly three times over the limit on Wednesday.

Smith and seven councillors were last week charged with fraud, accused of pushing the council’s CEO Sharon Kelsey out of her job.

An eighth councillor is also on charges, accused of siphoning funds into her own bank account.

Smith was already suspended from his job for alleged corruption offences when he was charged with fraud last week.

Local Government Minister Stirling Hinchliffe said he had no choice but to dismiss the council and appoint an administrator pending fresh elections in March next year.

“With nine of its 13 councillors automatically suspended as a result of serious integrity charges, council no longer had sufficient numbers to conduct meetings,” he said.

“This had left Council unable to pass a Budget, appoint an Acting Mayor or pass a resolution to delegate matters to a standing committee or the CEO.

“I have not taken this action lightly and I want to stress that I had no choice but to intervene in the best interests of Logan residents.

“This action does not interfere with any current legal proceedings and let me be clear any individuals facing charges are innocent until proven guilty.”

Whistleblower and division five councillor Jon Raven isn’t accused of any wrongdoing but will also lose his job by the end of the day, when moves to dissolve the council take effect.

Mr Raven supports the government’s decision and says he always knew there’d be a cost from speaking out.

“For the good of the city it needs to be done,” he told AAP.

Mr Raven said he would seek to regain his job at next year’s election.

Logan is the second council to be sacked by the government in less than a year, after alleged widespread corruption in Ipswich.

A Crime and Corruption Commission investigation found Ipswich City Council’s culture was allowed to rot for years, to the point where corruption was no longer recognised.

More than a dozen people connected to that council, including former mayors Paul Pisasale and Andrew Antoniolli, have been charged with criminal offences.

The appointment takes effect today and follows the dismissal of 13 councillors, prompted by an unprecedented integrity crisis in Logan.

“Dismissal is the only option available to me, given Logan City Council has lost its quorum and can no longer function effectively,” he said.

“Ms O’Shea is highly respected for her distinguished career as a senior public servant,” he said.

“In the coming weeks, I’ll be appointing an interim management committee, just as I did for Ipswich City Council to assist the interim administrator there to perform his responsibilities.