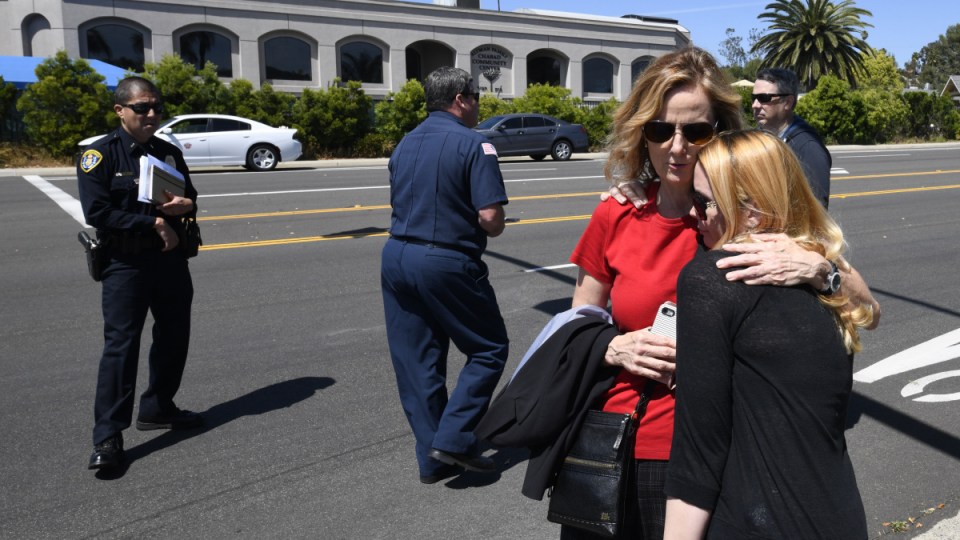 A woman is dead and at least three others wounded after a teenager armed with an assault opened fire inside a Southern California synagogue.

Four people were taken to hospital after the shooting at a synagogue outside San Diego just before 11.30am local time on Saturday.

Victims of the shooting include the resident rabbi, identified as Yisroel Goldstein, who lost two fingers.

US authorities have identified the teen suspect in the shooting attack at a synagogue outside San Diego as John Earnest and say he’s also being investigated over a fire at a mosque in a nearby city last month.

San Diego County Sheriff William Gore told reporters on Saturday the teen had no prior arrests, ading that his department will work with the FBI and the city of Escondido to investigate Earnest’s possible connection to a fire at Dar-ul-Arqam mosque last month.

Witness reports say congregants drove off the attacker left the premises after worshipper who works as a US Border Guard produced his own weapon and returned fire.

The unidentified youth was wearing a combat vest and brandishing an assault rifle when he burst into the synagogue and began shouting anti-Semitic slurs while spraying the congregation with bullets.

At least ten shots were fired before the gunman retreated.

All 4 victims of the Chabad of Poway shooting are now at Palomar Medical Center. Victims of the shooting at the synogogue include Rabbi Yisroel Goldstein who lost 2 fingers, another adult I know, and 2 minors. One minor age 11. #sandiego #poway #chabad #activeshooter #hatecrime https://t.co/FuCnODj8RK

Unconfirmed reports say the gunman then called police to report his location and waited calmly to be placed under arrest, offering no resistance when officers arrived.

There was no known threat after the man was detained, San Diego Police said, although patrols at places at worship in the area were immediately stepped up as a precaution.

“It was an extremely chaotic scene with people running everywhere when we got here,” San Diego Sheriff’s Sgt. Aaron Meleen told reporters.

Investigators have yet to specify a motive, but early reports paint a picture of a white supremacist whose writings attacked President Donald Trump for being a tool of a global Zionist conspiracy.

The attack came on the last day of Passover, the most sacred time in the Jewish calendar, and exactly six months since a shooting at a Pittsburgh synagogue 11 people dead.

– 3 of the 4 people (2 adult males, 1 female) shot are alive and recovering
– 1 woman was pronounced dead from gunshot wounds pic.twitter.com/oWpotokRTq

Mayor Steve Vaus told CNN it was a hate crime “because of statements that were made when the shooter entered” and by “someone with hate in their heart … towards our Jewish community and that just will not stand.”

“I also understand from folks on the scene that this shooter was engaged by people in the congregation and those brave people certainly prevented this from being a much worse tragedy,” Vaus told CNN.