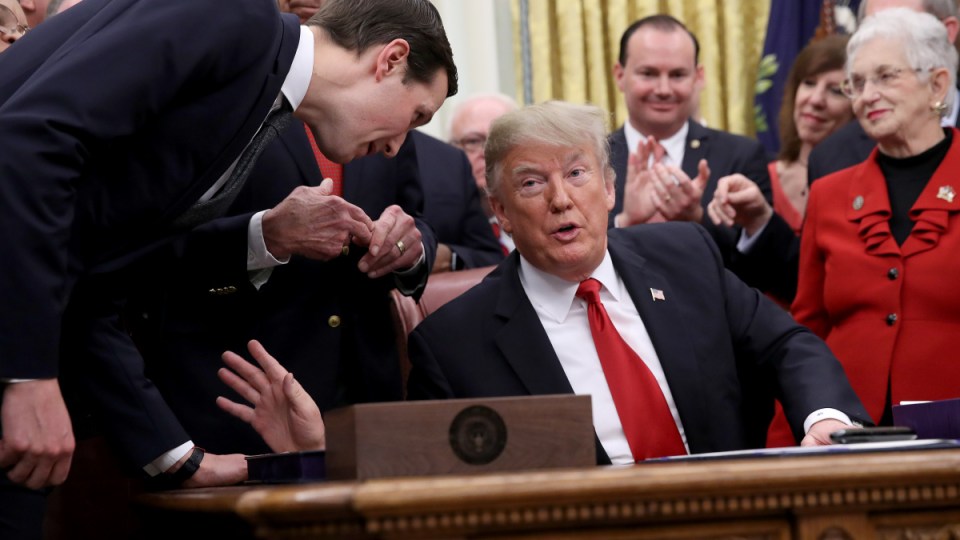 "Don't worry about it, kid. I'll get you the top-secret files for Christmas,"is something Trump might have said to son-in-law Kushner. Photo: Getty

In January, Mr Trump denied to The New York Times that he’d had any involvement in Mr Kushner’s security clearances.

“I know that there was issues back and forth about security for numerous people, actually. But I don’t want to get involved in that stuff,” he said at the time.

But that has been contradicted in a memo that Mr Kelly wrote to document the order, according to The New York Times report on Friday (AEDT).

Mr McGhan also noted his objections, and those of the CIA, in a separate memo.

The latest scandal caps off a woeful week for Mr Trump, that began with his former personal lawyer Michael Cohen tipping a bucket of muck over the President’s head in highly disparaging testimony to Congress.

Cohen called Mr Trump a conman, a cheat and a racist.

The President flew back to Washington last night after the sudden collapse of his much-heralded second nuclear disarmament summit with North Korea’s leader Kim Jong-un in Vietnam.

The claim in The New York Times threatens to put all that in the shade. It’s certainly damning – and outrageous, by even Mr Trump’s free-wheeling code of behaviour.

The report alleges that Mr Trump ordered Mr Kelly in May 2018 to override the security concerns of top US intelligence officials – and his own White House advisers – to grant a top-secret clearance to Mr Kushner, a senior White House adviser.

Mr Kushner’s security clearance had become a matter of conjecture from early on in Mr Trump’s presidency, because he had access to top-secret information despite having “temporary” or “interim” security clearance.

This is the usual protocol for new appointees, so they can do their jobs while their backgrounds are investigated.

For Mr Kushner, though, it dragged on for more than a year – amidst rumours of peculiarities in his family business, his dealings with foreign leaders, and the shadow of the Mueller investigation.

Chief of staff Mr Kelly responded by prohibiting access to top-secret material by all aides who were on temporary clearance – including Mr Kushner, who is married to Mr Trump’s daughter Ivanka Trump.

Then all his troubles disappeared

A spokesman for Abbe Lowell, Mr Kushner’s attorney, told The New York Times that Mr Kushner – who is currently working on a Middle East peace plan – had been assured that his security clearance was handled properly.

“That was conveyed to the media at the time, and new stories, if accurate, do not change what was affirmed at the time,” the spokesman said.

The White House declined to comment on the Times report.