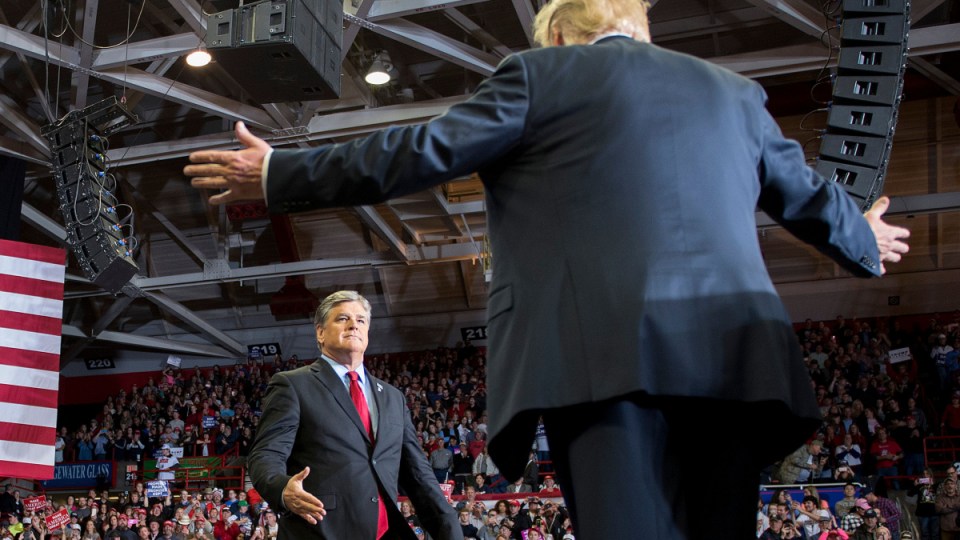 Has Donald Trump proved himself to be the glove puppet of America’s biggest loudmouth media star, Sean Hannity?

There is a growing belief among US media commentators that Mr Trump followed a step-by-step script laid out by Hannity in a blistering editorial written on the eve of the President caving in to the Democrats’ deal to fund the government and save the country from another punishing shutdown.

At the time, Mr Trump wouldn’t say if he would sign – but admitted he’d rather avoid another shut-down. He appeared to be miserably sitting on the fence, awaiting word from God.

John Berman, who anchors CNN news program New Day, observed: “Now, we do not know that the President will sign on. We do know that the co-president doesn’t like it. Sean Hannity called it a ‘garbage compromise’.”

The theory goes like this: Mr Trump agreed to sign the humiliating deal, and only at the last minute, because Hannity – who plays strongly to Mr Trump’s anti-immigrant base – gave the President his openly disgusted, yet sympathetic, blessing on the strict condition that he declare a national emergency to get the funds to pay for his long promised wall along the Mexican border.

Mr Trump took a battering from right wing commentators – and the Tea Party element of his party – for ending the recent five-week shutdown without getting the $US5.7 billion ($7.98 billion) to fund the wall, a key election promise.

The new funding deal was being endlessly described as his biggest humiliation, because it provided only a fraction of the wall funding – and added to the growing idea that he is a lame duck.

On the evening before Mr Trump was set to accept or reject the deal, Hannity wrote this:

“It would be perfectly reasonable for President Trump to reject this bill, but there may be another, even better solution.

“Step one: The President signs the deal, and uses the $US1.375 billion as a down payment for the wall.

“Step two: President Trump has identified some $US900 million for additional construction that is already available for the administration’s discretion. That would bring the pot to about $US2.3 billion.

“Step three: This needs to happen simultaneously, and it has the president declaring a national emergency. This is the time.”

A report at AlterNet, a liberal news site, noted: “Trump followed the instructions obediently, suggesting Hannity’s influence over the White House could be near-absolute.”

NBC’s Capitol Hill correspondent Kasie Hunt, appearing on MSNBC’s Meet the Press gave this analysis: “Clearly the President got this idea from Sean Hannity and voters like him who were saying ‘Fine, you have to swallow this, the Democrats have you in a bind but you have to declare this emergency.’ I think this problem is going to fester here for the President.”

Right-wing commentator Ann Coulter – whose influence is actually on the wane – has also been credited with pushing Mr Trump toward the December shutdown.

After Mr Trump backed off his demand for wall funding and signed a short-term spending bill, Coulter blasted him as a “wimp”. In an interview on the Yahoo News podcast, Skullduggery, early this month, she predicted that Mr Trump would go ahead with the declaration:

“I think he’s finally going to pull that pocket Constitution out of his lapel pocket and, ‘Oh my gosh, I’m the President. This is great’.”

No, the goal of a national emergency is for Trump to scam the stupidest people in his base for 2 more years. https://t.co/6DQSkqxV8h

Yesterday, in the Rose Garden, The New York Times reported the President was asked who might have influenced his decision to declare a national emergency. Sean Hannity, Rush Limbaugh, Tucker Carlson and Laura Ingraham had all urged Mr Trump against making any budget compromise on wall funding — and they all received a salute from the President.

“He can speak for three hours without a phone call,” Mr Trump said. “Try doing that sometime. For three hours he speaks. He’s got one of the biggest audiences in the history of the world. I mean, this guy is unbelievable.”

But reserved his biggest praise for Hannity.

“Sean Hannity has been a terrific, terrific supporter of what I do,” he said.

Hannity has done more than that. He has appeared on stage with Mr Trump at rallies – all but declaring himself part of the team.

The question now is: who’s the boss?