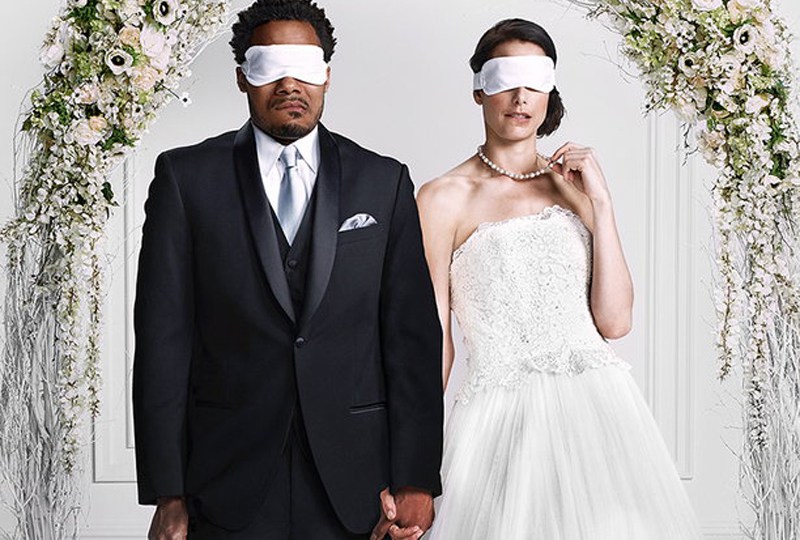 Six series of Channel Nine’s Married At First Sight – and so far the experts’ success rate, in terms of creating a happy-ever-after situation, stands at 2 per cent.

A three-legged horse would get better odds in a steeplechase event.

Still, one couple out of 45 is still together – and they, Melbourne’s Erin Bateman and Bryce Mohr, from the second series, are reportedly planning their actual real-life wedding. Congrats!

But if ever-lasting love is truly the business of MAFS, then surely the liquidators would have moved in long ago – and the three psychologist matchmakers sent off to work in call centres.

But, no. MAFS is Channel Nine’s pot of gold – and the relationship experts Mel Schilling, John Aiken and Trisha Stratford – are still hunched over their cauldron of love, “scientifically” matching strangers to meet at the altar, get blind at a family-filled reception, live together in awkward congress and talk at odds about the few-cha.

Where is the love?

On the face of it, at least some of the participants enter the “experiment” with a genuine desire to increase their personal happiness and wellbeing via love. That is, in good faith they trust that the experts have wisely and carefully matched them with suitable life partners.

But how many times are the folks at home – the audience of 1.7 million – given cause to ask: “What the hell were they thinking?”

From the 2018 series: flop-haired giggler Troy Delmege drove flight attendant Ashley Irvin to despairing tears week after week with his insensitive antics and non-stop chattering by way of shutting her up.

In the end, he paired up with the profoundly dejected and sexually frustrated MAFS bride Carly Bowyer whose own TV husband and ice-lolly magnate Justin Fisher failed to find his own pulse and … well, what we ended up with was a soap opera.

In 2017: New-Agey airhead Deb, upon seeing her dreary, blokey smoker husband John at the altar declared: “But I wanted a Polynesian.”

This year we have the abusive refugee and pre-packaged “villain” Ines abusing husband Bronson on their honeymoon – “just shut the f— up” –and declaring all she wanted was a “hot husband.”

This isn’t science at work. It’s script writing. And it raises questions about duty of care, the ethics of psychological practice, and whose interests the experts are serving.

Money, fame or playing the game

Lyn Bender is a psychologist who previously ran Lifeline operations, and was a professional adviser for ethics for the Australian Psychological Society from 2005 to 2010. When working registered psychologists had ethical questions regarding their practice, she was one of two people to call.

Ms Bender also came to prominence in 2002 as a whistle-blower at the Woomera detention centre, where she was appalled at the mental health of the inmates. She tells the story of a “psych concluding that if a detainee agreed to go home to Iran – despite the detainee believing it would be life threatening – at least he would see his family before he died.”

She added: “When I was at Woomera, I felt I had to ethically call it out. There were plenty of psychologists who came, took the money and did the bidding of management.”

The broader point she was making: as far as ethics among psychologists go, “there are plenty of failings”, she said, pointing to psychologists working in advertising, for security agencies, in corporations as facilitators of worker compliance.

Ethics are way down the line

Regarding Married At First Sight, she said: “Well, I’m sure they screen out people who might throw themselves off a cliff … but aside from that, I think ethics are way down the line. There’s too much big money and the allure of celebrity.”

Ms Bender, who runs a private practice, is also concerned that psychologists are often guilty of overreach.

“Scientifically matched is a term thrown around a lot, and it discredits science … I don’t know there is a science that can match people relationally really. Just from data. There’s the actual physically being around someone: sometimes you feel a connection; sometimes you feel aversion. That can change, but there’s a vibe you get that can’t be predicted.”

The big question: are the experts making their matches purely on compatibility or for the sake of drama? Or a clever hybrid?

In an interview with my colleague Kate Halfpenny, relationships expert John Aiken said: “Are there bigger twists and more controversy? Yes. You’ll definitely see it’s more edgy this year,” he said. “There are more episodes this year but also we keep it fresh with some different twists.”

The bigger question is: if the experts are bringing people together for shock value, does this leave them vulnerable to litigation by disgruntled participants?

Nunzio Tartaglia is head of civil liability at law firm Slater and Gordon.

“I do watch the show I have to say. I do know these couples. My wife’s a big fan of the show, and I’ve latched on to it,” he said.

Mr Tartaglia noted that some of the MAFS grooms “are copping it from their new wives. To get that on national television can’t be a good thing for your mental state”.

He added that “arguably, some of these couples were so far apart in balancing each other out, you wonder what was the real reason they have put them together? Are they setting them up for failure?”

However, he said it would be difficult to mount a case in court that the psychologist had failed in their duty of care, or against the producers for promising love and delivering a shouting match.

The difficulty, he said, would be in proving that the experts had set them up for relationship disaster and attendant emotional damage.

“If someone came asking me to mount a case, I probably wouldn’t take it on,” he said. “If there is a low chance of winning, it’s not in the client’s best interests to proceed.”

Alison Barrett is Queensland head of public liability for law firm Maurice Blackburn. She said that generally, with a TV production, participants sign contracts that acknowledge they have given fully informed consent regarding the prospects of success.

“In addition to that, they would have signed a waiver and release that would prevent them from making a claim,” she said.

For the psychologists, though, she said it was tricky “because who is their client? The company or the participants? They are obliged to tell the clients about the conflicts of interest”.

Consumer law could be an avenue of redress

The next step, Ms Barrett said, would be to prove there has been some sort of breach of legal rights.

“To bring any claim there has to be some type of loss,” she said. “Has their character been defamed? Have they suffered a psychological injury?” (At least two contestants have said that pressures associated with their MAFS experience led them to consider suicide.)

The evidentiary onus, though, is on the complainant.

Ms Barrett did note there is consumer law about misleading conduct.

“Has the TV production company been misleading and deceptive? And have they engaged the contestants to be part of that? It’s illegal to do that.”

Ms Barrett, once a viewer, isn’t watching MAFS this season. “I get hooked on it,” she said.

Responding to questions and a request to interview the experts, Channel Nine forwarded the following statement from Endemol Shine Australia, the production company:

“The health and safety of our participants is always our first priority. Psychological support is readily available on all of our programs, however we do not comment on specific production matters.”

For love or drama: Whose interests the Married At First Sight experts are really looking out for