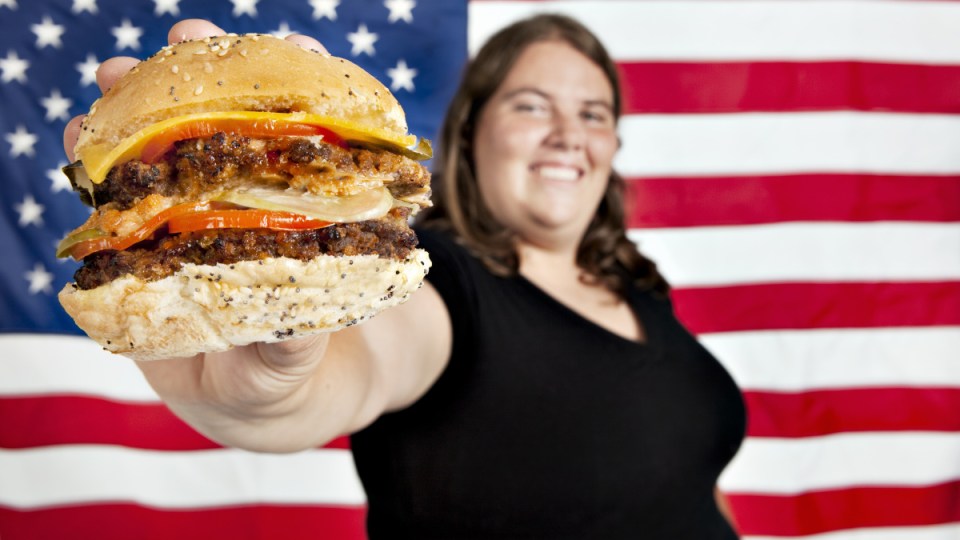 Nearly 40 per cent of Americans are obese. Australians? A mere 30.8 per cent. Photo: Getty

Nearly half of all adults in the United States have some type of cardiovascular disease (CVD), according to the American Heart Association’s Heart and Stroke Statistics, 2019 Update.

On the face of it, Australia’s sport-mad, sun-kissed nation can feel pretty good about itself.

But when you tease the figures apart, you find the American Heart Association came to this alarming figure by including high blood pressure along with coronary heart disease, heart failure and stroke.

Exclude high blood pressure, and CVD prevalence among adults in the US is nine per cent overall – or 24.3 million in 2016.

That’s nearly the population of us Down Under.

But hang on. According to the Australian Heart Foundation, one in six Australians is affected by CVD – or nearly 17 per cent.

Or nearly twice the rate of pork chop America – but that’s only if our countries measure CVD in a like for like fashion.

Heart Foundation General Manager, Heart Health, Bill Stavreski doesn’t know if we do – and cautions against such comparisons.

What is meaningful, says Mr Stavreski, is this: Australian obesity rates have quadrupled in 40 years.

More than two-thirds – 67 per cent – of Australian adults are overweight and obese, with the likelihood of this increasing with age.

Three quarters of Australian men – 74.5 per cent – can no longer see their toes.

According to the Centers for Disease Control and Prevention, 39.8 per cent of Americans were obese in 2015-2016.

In Australia, the age-standardised rate for obesity was 30.8 per cent in 2017-2018, which means we’re kicking America’s sagging butt with our uncomfortably swollen feet!

Mr Stavreski makes another interesting point: the 2017 American Heart Association and American College of Cardiology hypertension guidelines updated the definition of high blood pressure as a reading of 130/80 mm Hg, from the previous definition of 140/90 mm Hg.

If Australia adopted this definition,Mr Stavreski says, then nine million adult Australians – or half the adult population would – have be rated as having high blood pressure.

Regardless of where you draw the line or what comparisons you want to make, get this: about 1.4 million Australians aged 45 to 74 have a high risk of a heart attack or stroke in the next five years.

And almost one million of these are not receiving appropriate treatment as recommended by Australian guidelines.

What the real figures suggest – the figures we see in the national mirror – is that most of us are sitting at home, finding comfort in a packet of biscuits.

Half of America has heart disease. Is Australia any better?