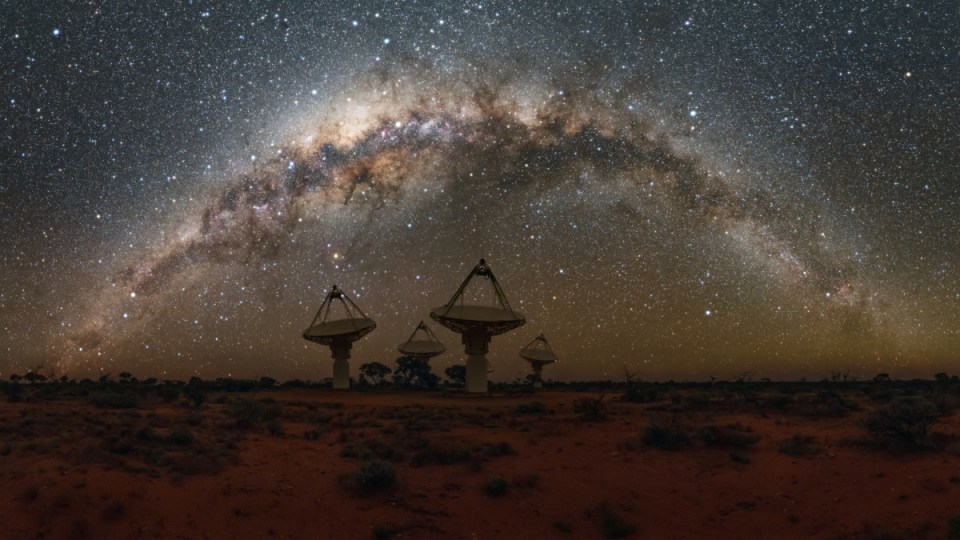 Scientists have discovered a second repeating signal from deep space, known as a fast radio burst – but this one is much closer to Earth than the last.

There are many theories but little confidence as to what a fast radio burst (FRB) is: most scientists favour the idea they are a result of colossal natural forces, but some have seriously argued they may be the work of extragalactic civilisations.

If you are prone to alien theories, your initial reaction to that news might be: “OMG. They’re coming closer!”

The repeating radio flashes are coming from completely different directions. So your next reaction might be: “OMG. They’ve got us surrounded.”

And that’s true. Fast radio bursts – intense, powerful and highly dispersible bursts of radio energy lasting only a millisecond – are thought to happen about 10,000 times a day and come from all directions.

But only a few dozen have ever been seen.

They can pack as much energy as the sun emits in a day … or a century. And they are thought to come from outside the Milky Way.

When they were first discovered in 2007 – during a review of 2001 data gathered by the famed Parkes radio telescope in New South Wales – FRBs were thought of as mysterious one-off colossal explosions, as you’d get with a supernova or merging black holes.

Neutron stars throwing a fit or something even stranger?

One theory has it that FRBs comes from magnetised neutron stars, called magnetars, during starquakes or massive magnetic field events.

The idea that FRBs are the work of extragalactic civilisations trying to get in touch with one another wasn’t exactly dismissed out of hand – but it’s low on the hypothetical totem pole.

And then the alien theory got a leg-up: In 2012 the first repeating signal was discovered. Named FRB 121102 after its date of discovery, and later found to reside in an obscure dwarf galaxy, it became the FRB of deepest fascination.

Why was it repeating those flashes of energy? And why did it sometimes go berserk?

On August 26, 2017, astronomers with the Breakthrough Listen project – the $100 million hunt for intelligent aliens founded by Stephen Hawking in 2015 – spotted 21 flashes from FRB 121102 within the span of one hour. In total it flashed 96 times for the day.

Dr Ryan Shannon is a postdoctoral fellow at Swinburne University of Technology, and works with the astrophysics group at CSIRO Astronomy and Space Science and the International Centre for Radio Astronomy Research.

In October, Dr Shannon co-authored a paper in Nature that announced the discovery of 20 new FRBs, including the brightest one ever seen – using the Australian Square Kilometre Array Pathfinder (ASKAP), a radio telescope in regional Western Australia that consists of 36 12-metre dish antennas.

Each antenna is equipped with phased array feeds – radio cameras that would enable searches 36 times wider than could be seen with older technology.

Before Dr Shannon and company made their discovery, only three dozen FRBs had been identified. He told The New Daily that FRB 121102 is still flashing on and off.

“It goes quiet for months at a time … and then flashes again,” he said. “In astronomy, you’re usually observing things happening on billion-year time scales. It’s crazy when things change on monthly time scales.

“This is causing us to look at the universe in a new way. Because these bursts are confusing and unexpected.”

In this Conversation piece, Dr Shannon explains why FRBs are useful in determining what the universe is made of – especially the empty parts – and why they are so puzzling.

On Thursday, scientists from CHIME, the Canadian Hydrogen Intensity Mapping Experiment, a new kind of radio telescope located in the mountains of southern British Columbia, published two papers that detail the detection of 13 new FRBs – and one of them is a repeater named FRB 180814.J0422+73.

The newly found repeating bursts – six of them – are estimated to originate from about 1.5 billion light years away, approximately half the distance of the original repeater, FRB 121102.

The authors note “some similarities between the repeating bursts, which may suggest similar emission mechanisms or propagation effects”. They also concluded that more repeating FRBs are awaiting discovery.

Dr Shannon said the CHIME telescope, which features 1024 dual-polarisation radio receivers, sees a much bigger area of sky than any other telescope in the northern hemisphere.

“Over the course of the day the entire sky passes overhead,” he said.

Where to find them in the sky

To have an idea where FRB 121102 comes from, Dr Shannon suggested looking due north, just above the horizon.

“The new one comes from a very different direction,” he said, suggesting you’d need to look down and through the Earth to the sky on the other side.

But as we’re looking at where they come from, is there somebody or something looking back at us?

In 2017, Harvard researchers published a provocative paper that examined “the possibility that fast radio bursts (FRBs) originate from the activity of extragalactic civilizations”.

They suggested the bursts of energy could come from powering giant solar sails – of the sort being developed by NASA – that might be carrying alien beings through the universe.

“Our analysis,” the scientists wrote, “shows that beams used for powering large light sails could yield parameters that are consistent with FRBs …

“Moreover, the optimal frequency for powering the light sail is shown to be similar to the detected FRB frequencies. These ‘coincidences’ lend some credence to the possibility that FRBs might be artificial in origin.”

If the aliens were planning to visit Earth, we would have been single-cell organisms when they first left home.

Dr Shannon has his doubts.

“As a scientist, you want to have strong evidence to rule out any theory,” he said.

“If it was a civilisation, it would require a huge amount of energy to do it, as much energy as the sun produces in a matters of months or years. There are a lot of natural processes that could cause that.”