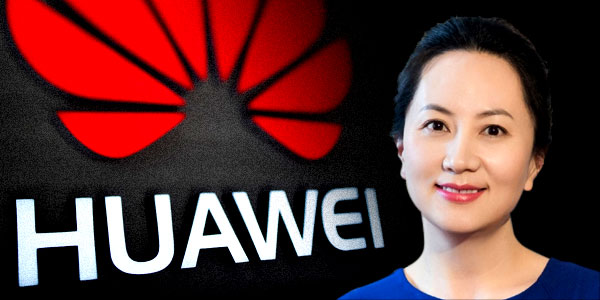 The arrest in Canada of Meng Wanzhou, an executive with Chinese telco giant Huawei, is more than an ‘up-yours’ to China from Donald Trump – it is the flashpoint in a tech cold war 15 years in the making.

Where the Cold War of the 20th century was a game of spies in trench coats and the threat of nuclear oblivion, the cloak-and-dagger side of the simmering conflict between China and much of the Western world is being played out in telecommunications.

The trade war sparked by “Tariff Man” Trump is bound to become more volatile – despite the US President’s assurances that he has struck a peace-making deal with China – but it’s only one complication.

Everybody’s secrets are at stake.

This is the view of Associate Professor Mark Gregory, from the School of Engineering at RMIT University – backed up by pundits in media reports the world over.

What’s next? Nobody knows

The overall mood is that if the sky hasn’t fallen in yet: it’s simply waiting its turn.

The arrest of Huawei CFO Ms Meng, at the behest of a New York prosecutor – citing unspecified breaches of sanctions against Iran – caused a sudden dip in global markets and an outbreak of febrile accusations between China officials and US lawmakers.

How it will be resolved is anybody’s guess. Any pretence at temperate language has been abandoned.

China has characterised the arrest as a breach of Ms Meng’s human rights.

“Without any solid evidence, the Canadian and US governments trampled on international law by basically ‘kidnapping’ Chinese citizen Meng Wanzhou,” so wrote Mei Xinyu, a research fellow with an institute under the Ministry of Commerce, in the pages of The Global Times, a hyper-nationalist tabloid published by the Communist Party.

“China should be fully prepared for an escalation in the #tradewar with the US, as the US will not ease its stance on China, and the recent arrest of the senior executive of #Huawei is a vivid example,” said the statement, paired with a photo of opposing fists with Chinese and American flags superimposed upon them.

China should be fully prepared for an escalation in the #tradewar with the US, as the US will not ease its stance on China, and the recent arrest of the senior executive of #Huawei is a vivid example: Mei Xinyu, an expert close to the Chinese Ministry of Commerce pic.twitter.com/W4fp8YNfmD

Some in the US have said that American tech executives working in China are at risk of being taken as hostages.

Senator Ted Cruz came roughly to the nub of the matter in a tweet, describing Huawei, which operates in 170 countries and services a third of the world’s population, as “Communist Party spy agency thinly veiled as a telecom company”.

While so much focus is on Ms Meng, who was applying for bail while the US prepared an extradition application, Dr Gregory says that a broader view shows that her arrest is the latest in a string of setbacks for Huawei over the last year.

In February, Chris Wray, the director of the FBI, told the US Senate Intelligence Committee they would advise Americans not to use products or services from Huawei and telecom rival ZTE.

“We’re deeply concerned about the risks of allowing any company or entity that is beholden to foreign governments that don’t share our values to gain positions of power inside our telecommunications networks,” Mr Wray said.

Mr Wray’s assessment was backed up by senior officials from the CIA and the National Security Agency (NSA).

In recent weeks, New Zealand and UK have followed the US and Australia in banning Huawei equipment from their mobile networks. Japan is said to be announcing a similar ban soon.

Four weeks ago, The Australian newspaper reported being privy to a secret intelligence report that found Chinese espionage services used Huawei’s staff to get access codes to infiltrate a foreign network, not an Australian one.

It was significant that Ms Meng was arrested while transiting through Canada – because Canada has so far maintained a friendlier relationship with Huawei. So she didn’t see it coming.

Canadian Prime Minister Justin Trudeau said his government had no involvement in the arrest of Ms Meng, but he admitted he had been given a few days’ notice.

“The appropriate authorities took the decisions in this case without any political involvement or interference … we were advised by them with a few days’ notice that this was in the works,” Mr Trudeau said.

Dr Gregory told The New Daily there have been no publicly revealed documents showing evidence of Huawei engaged in espionage.

“The only public documents are the Snowden papers, and they showed that it was American agencies that have used telcos to spy on people,” he said.

“The NSA has been doing the same thing that Huawei is being accused of. But there is no public (evidence) that shows that Huawei has been a conduit for the Chinese government. That’s not to say there isn’t a concern or something going on. We have to remember that Nokia and Ericsson have factories a stone’s throw from the Huawei factories in China.”

Dr Gregory said that the public cold war blowing up now was essentially prophesied 15 years ago, when the intellectual property and technology transfer methodology being used by China was identified, and concerns have been growing since this time.

“Australia should have a whole-of-life security assurance capability to ensure that all equipment and systems used in the telecommunications networks are safe to use,” he said.

“A key reason for this need is that most of the global telecommunications companies manufacture in China today, so it is unreasonable to think that a ban on Huawei and ZTE will make the telecommunication networks safe.”