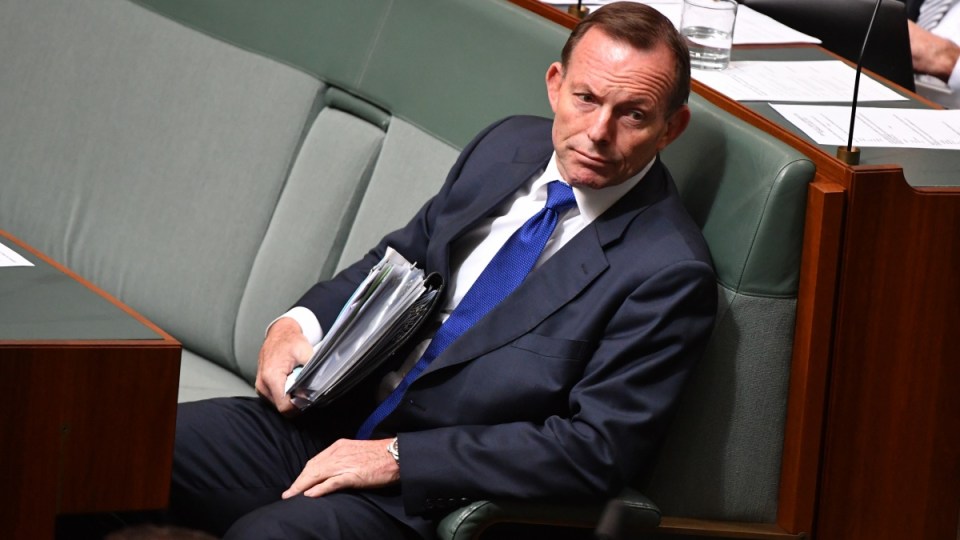 Tony Abbott said he didn't "rule any of those things [party leadership and being PM] out". Photo: AAP
opinion

Two significant events happened this weekend: Boxer Anthony Mundine was knocked out in 96 seconds by Jeff Horn, ending a career that was never wholly satisfying for the man or his followers.

Meanwhile, Tony Abbott put his gloves up once more, telling The Australian newspaper on Saturday that he’s ready and able to join the front bench, perhaps even to be prime minister again.

If I had to say which man is more punch drunk, I’d say it’s Mr Abbott.

Where Mr Mundine finally seems ready to move on with his life and hopefully become the great leader of young Aboriginal people that he’s always aspired to be, Mr Abbott is cutting a sadder figure by the day, hoping that his old mates might rally round, getting him back in the ring – at a time when the prevailing message from his own people is, ‘it’s time to go’.

The hangers-on at ringside

Boxing isn’t a team sport. But there are always plenty of people hanging around, urging their man to keep on punching and ignore the pain, living vicariously through his broken nose and the sound of his flailing fists cracking the ribs of his opponent.

It’s all great fun until it isn’t and the coulda-been champion is alone in his dressing room, planning for the next title fight that will never come.

Suburban gyms are dusty with old fighters who can’t ever quite let go of their dreams.

Mr Abbott is still wearing the gloves he put on at Oxford University, kept wearing them through his ferocious time as opposition leader, his clumsy and time-wasting stint as prime minister, and his ignoble period of king-hits and sly jabs at Malcolm Turnbull during his campaign for vengeance.

Now he’s fighting for a chair in the inner circle, and there’s no one left to hit – the old one-two won’t get him anywhere. And where he wants to be is back on top.

One theory holds that he’s addicted to the power – and can’t help it.

His research found that the exercise of power increases levels of testosterone that spark an in increases dopamine levels – the pleasure hormone. Dopamine provides the short-term high that leaves cocaine and gambling addicts craving jolt – and politicians too.

It also leads to arrogance, impatience, egocentricity and lack of empathy – and could explain why successful but ultimately obstinate leaders such as John Howard and Margaret Thatcher clung to office way past their use-by date.

This research has been sideways supported by other studies, including two decades of research by Dacher Keltner, a professor of psychology at University of California, Berkeley – and author of The Power Paradox: How We Gain and Lose Influence.

Dr Keltner found that people too long in power act as if they have suffered a traumatic brain injury –punch drunk, if you will – becoming more impulsive, less risk-aware, and, crucially, less adept at seeing things from other people’s point of view. What made them successful on their rise to power is lost once that power is exercised.

Sukhvinder Obhi, a neuroscientist at McMaster University, in Ontario, put the heads of powerful people under a transcranial-magnetic-stimulation machine.

He, too, found that power impairs a specific neural process, “mirroring”, that may be a cornerstone of empathy. You can read more here.

This might go some way to explaining Mr Abbott being deaf and blind to reality – especially when considered in tandem with the cruel, pointless encouragement he has received from media commentators such as Andrew Bolt, Alan Jones and the woman he faithfully championed as his chief of staff, Peta Credlin.

His political stablemates, such as Peter Dutton and Craig Kelly, have not done his psychology any favours either by egging him on.

If the researchers are right, they have been playing havoc with a damaged person – just like those hangers-on at ringside, urging their man to take one more punch to the head.

Finally, though, one has to look at Mr Abbott’s religious faith and to related mythologies. One of them is the popular and ruinous idea that the fallen leader – and anyone with a dream – can, and in fact must, keep going.

“Never give up on what you really want to do. The person with big dreams is more powerful than one with all the facts,” so said Albert Einstein who should have known better.

Mr Abbott, you won the champeenship. You knocked down all-comers. You were a contender.

But your days in the ring are over. Go and find yourself some new and better friends.

Coulda been a contender: Why Tony Abbott keeps on punching