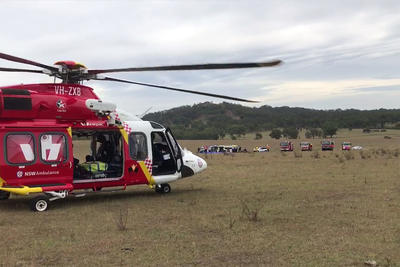 Rescue vehicles at the scene of the accident near Greta in the NSW Hunter Valley. Photo: AAP

A hot air balloon that crashed in the NSW Hunter Valley with at least 15 people onboard has left four people in hospital, including a young woman with suspected spinal injuries.

The balloon’s basket made a hard landing, tipped sideways and was dragged a number of metres at Greta, about 21 kilometres from Cessnock, on Saturday morning.

The balloon, from ballooning company Balloon Safaris, took off with three other balloons at 5.45am in calm conditions, before wind speed picked up beyond expected levels.

Six people were injured, including a woman in her 20s with suspected spinal injuries and an 80-year-old woman who fractured her leg, a NSW Ambulance spokesman said.

They were both airlifted to the John Hunter Hospital by the Westpac Rescue Helicopter.

NSW Ambulance transported two other women, one with a suspected fractured rib and another with a cut to her head, to Maitland District Hospital.

Matthew Scaife, director of Balloon Safaris, confirmed the incident will “100 per cent” be investigated by the ATSB, but labelled the situation “unfortunate”.

“Three other balloons landed properly, but one landed badly and there was a bush they were dragged across,” Mr Scaife explained to The New Daily.

“There was a woman in her 80s who lost her grip and when she landed she injured her arm and, in doing so, injured the lady next to her.”

Mr Scaife said the company would not have flown if weather conditions appeared dangerous, adding although that high wind speeds had been forecast, they were expected much later in the day.

“The first half of the flight was beautiful … it was forecast the winds would pick up around 9.30am, but they dropped in a lot earlier than forecast – about 6.30am,” he explained,

“We just don’t get conditions like that. It was a perfect storm of heat and the conditions – it’s not usually that hot and windy at 6.30 in the morning.”

In a statement, the Australian Transport Safety Bureau said it will be conducting a short investigation into Saturday’s hard landing, which injured several passengers.

As part of it investigation, transport safety investigators will interview the pilot of the balloon and other witnesses.

“Investigators will also obtain any other available information such as any video footage or photos taken at the time of the incident,” the ATSB statement read.

Balloon Safaris has been operating 300 flights a year for 20 years and Mr Scaife said this incident was the first time he’s dealt with an ambulance or rescue helicopter.

A report of aviation occurrence statistics by the ATSB reported two air transport accidents and 17 general aviation accidents between 2006 and 2015.

“Balloons being used for private flying had the highest accident over this period (1170 per million hours flown) due to 17 accidents and a relatively small amount of flying activity,” the report said.