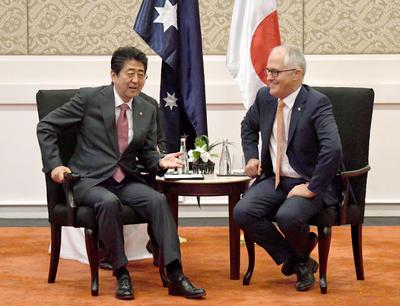 Prime Minister Malcolm Turnbull will visit a military base near Tokyo next week, as he discusses the likelihood of Japanese troops conducting training exercises in Australia.

Mr Turnbull will meet his Japanese counterpart Shinzo Abe in Tokyo, where the pair will discuss the “potential to collaborate further”, namely through the security pact.

The nations are working towards a defence agreement as China’s activity rises in the Indo-Pacific and North Korea builds up its nuclear weapons.

The ABC understands Tokyo had wanted the arrangements formalised last year, which would include RAAF joint exercises in Japan.

It is expected to also allow Australia and Japan to transport ammunition and military equipment between the two nations more easily.

Mr Turnbull said security ties needed to be deepened in a “period of strategic uncertainty”.

“Prime Minister Abe and I are committed to strong defence cooperation through joint exercises, information sharing and defence industry collaboration,” Mr Turnbull said in a statement.

“We are working to formalise this in our reciprocal access agreement that will further enhance our defence interoperability.”

Peter Jennings from the Australian Strategic Policy Institute said Australia and Japan were concerned about Beijing and “uncertain about the behaviour of China’s military forces in the region”.

“Neither of us wants to see China as a threat, but there’s undeniable concern about Chinese behaviour and I think that’s leading to the two countries getting closer,” Mr Jennings said.

The strategy to bolster defence cooperation comes amid a dispute over Beijing’s activities in the South China Sea, the strategic sub-region of the Indo Pacific.

Last year, Australia discussed joint exercises with Japan and the United States, but India blocked the bid over concerns it could inflame diplomatic tensions with China.