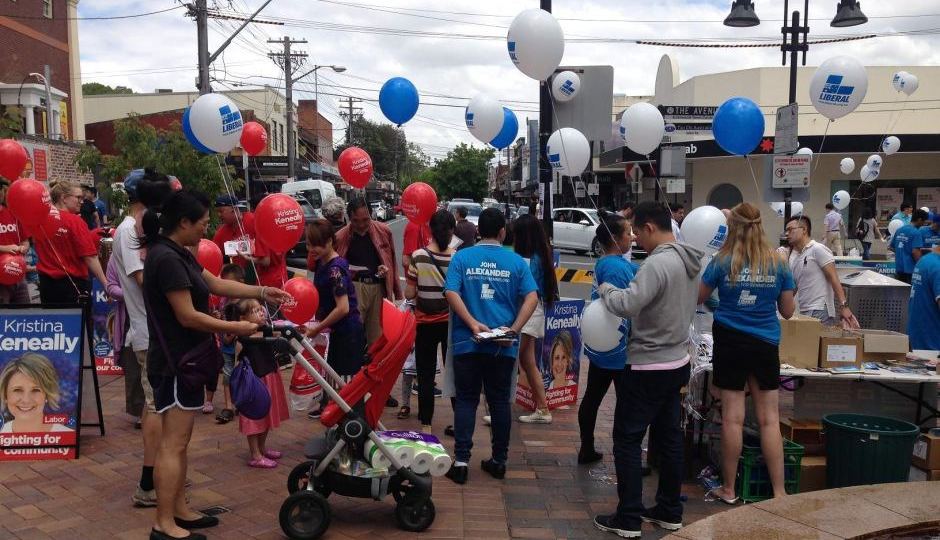 Liberals and Labor supporters campaign at the Eastwood Mall in Bennelong. Photo: ABC

The crucial by-election in Bennelong has been dominated by rising tensions between Canberra and Beijing, with a mysterious letter urging the local Chinese community to abandon the Coalition and support Kristina Keneally.

The letter shared on Chinese language social media platform WeChat said the Turnbull Government was helping the media accuse Chinese leaders and students of being spies, without adequate evidence.

Its content appears to reflect growing concerns within China about the Coalition’s proposed ban on foreign donations and interference, which Beijing has condemned as an attempt to stir “China panic”.

“In our eyes, the current Liberal Coalition party is very different from before – it’s now an extreme right wing ruling party,” the letter said.

“They are against China, against Asian migrants, against Chinese international students in broad daylight and under the table.”

The letter said it had been written by “a group of Chinese people who have made Australia their home”.

The ABC has not established who wrote the letter, or how many people in Bennelong have received it, although Fairfax Media reports it was shared by a leader of the Australian Council for the Promotion of Peaceful Reunification of China.

Controversial Chinese billionaire Huang Xiangmo is a former leader of the group, which has been linked to a Chinese Community Party body created to spread influence overseas.

Close to 19 per cent of the Bennelong community were born in mainland China and the community’s votes will play a crucial role in the by-election.

The letter points out that if Labor were to win at the polls, the Turnbull Government would lose its slim majority in the House of Representatives.

“The votes from Chinese voters in these areas may direct [sic] vote down Prime Minister Malcolm Turnbull,” the letter said.

It also accuses the Turnbull Government of being hostile in the South China Sea and not standing up to One Nation’s anti-immigration rhetoric.

“They are pushing the Australia and China relationship to the edge of distrust,” the letter said.

All of this hurts the interest of Chinese Australians, and they are not in line with the interests of Australia. This will be the nightmare for all Australians.”

Prime Minister Malcolm Turnbull has rejected claims the Coalition is stirring up anti-China sentiment, as Labor leader Bill Shorten has alleged during the by-election campaign.

Mr Shorten called on the Prime Minister to “pull his head in on his China-phobia” earlier this week.

“It is a desperate and absurd claim,” Mr Turnbull said. “Our ties with China are stronger all the time and they are basically built by people-to-people links and family links.”

At a press conference on Thursday, Mr Turnbull said Labor was trying to turn Australians against each other for political gain.

“You can imagine how everyone feels in the Government, especially me, to have Kristina Keneally and Bill Shorten saying I am anti-Chinese,” he said.

“There are one million Australians of Chinese ancestry. You could not imagine Australia without them, they built Australia, together with all of the rest of our extraordinary diverse community.”

Mr Turnbull has also referenced his Chinese daughter-in-law as evidence he is deeply connected to the Chinese community.

“To suggest that somebody whose granddaughter is one of those one million Australians of Chinese ancestry, is anything other than a friend of Chinese people is absurd, completely absurd,” he said.

The Liberal Party has also directly appealed to the Chinese community in Bennelong, by sharing “scratchies” in Mandarin that say it would be a gamble to vote for Labor.

“Scratch the panels below to reveal the consequences of voting Labor,” the material said.

When Mr Turnbull announced foreign interference legislation, which has been firmly condemned by the Chinese Government, he stressed it was not specifically related to China.

Australia’s ambassador in Beijing was hauled in to see the Chinese Foreign Minister earlier this week for a robust discussion, amid rising tensions between the two nations.

The Australian Council for the Promotion of Peaceful Reunification of China has been contacted for comment.