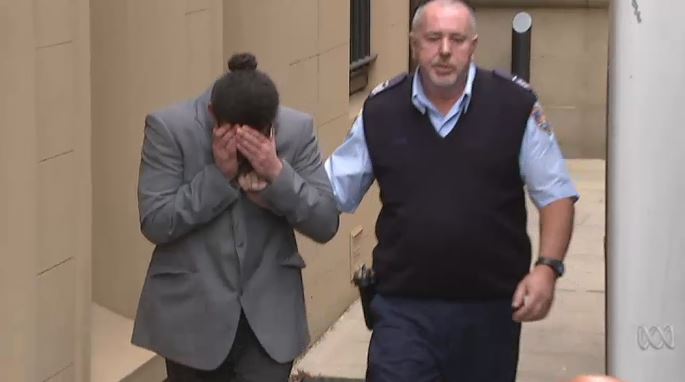 Killer Aymen Terkmani hides his face as he is led from court. ABC

A Sydney man who brutally raped and murdered his 16-year-old friend has been sentenced to 45 years in prison for what the judge called an “unspeakably violent” and disturbing crime.

NSW Supreme Court Justice Lucy McCallum said the case was complicated, as the offender did not offer any explanation for his actions.

Mahmoud was last seen alive on the evening of May 16, 2015, when security cameras captured the teenager and Terkmani eating at a fast food restaurant in Villawood.

His body, covered in blood, was found in an abandoned house in the western Sydney suburb of Fairfield East the next day. He had been beaten with a toaster and rolling pin, strangled, and sexually assaulted.

The victim was left in a pool of blood, with the court hearing Terkmani took his clothes, phone and money. Mahmoud’s brother found him “shattered beyond recognition” at the house, the court heard.

Terkmani sat in court with his eyes down, wearing a black suit with his hair pulled into a ponytail. He appeared to be fighting back tears as the judge asked him to stand and hear his sentence.

Terkmani can apply for parole after serving 33 years of his sentence.

“The offender should not be regarded as beyond redemption,” Justice McCallum said.

In her sentencing remarks, the judge painted a picture of the victim as a hardworking, warm-hearted teen who gave most of his wages as a labourer to his parents and dreamed of building his mother a mansion.

“The impact on the family of Mahmoud Hrouk has been absolutely devastating,” Justice McCallum told the court.

She described how a previously “happy and close” family who played backyard cricket and footy in the park together had been changed forever and were left “bitter, dysfunctional and torn”.

The judge said the victim’s injuries — which were too gruesome to describe — indicated the offender had a psycho-sexual motive.

Outside the court, a big group of family and friends of Mahmoud gathered and thanked the court for the decision.

“We all believe in the laws, we are all under the law here,” Mahmoud’s mother Maha Dunia said.

“I’d like to thank you all and God bless you.”