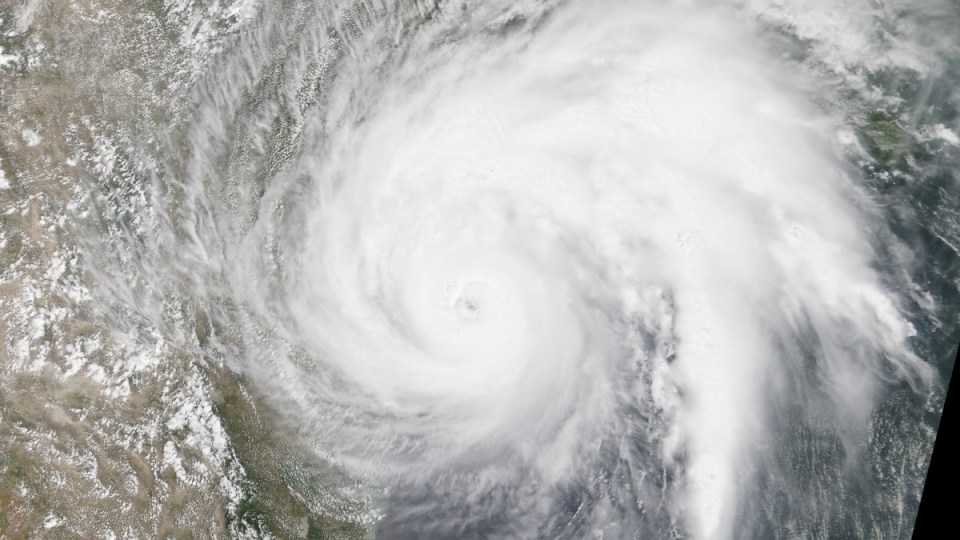 Staff have been evacuated from offshore oil and gas platforms as more than 45 per cent of the country's refining capacity is along the US Gulf Coast. Photo: AAP

A hurricane that experts predicted would be even more catastrophic than the infamous Hurricane Katrina, which killed 1800 people in 2005, has slammed into the gulf Coast of Texas, leaving at least one person dead.

But instead of the sustained category five winds anticipated to do the most damage, it is massive flooding that now has emergency services fearing the worst.

Harvey roared in from the Gulf of Mexico and lashed the coastal communities of Port Aransas and Port O’Connor with winds of up to 210 kilometres per an hour before defying predictions and weakening from a category four storm to a mere category one.

But that was small comfort for emergency services teams and evacuated residents in Texas and neighbouring Lousiana who were being soaked by torrential downpours and surging tides.

The storm is expected to meander across the coast and up through Louisiana for days, with forecasts for storm surges of up to four metres and as much as a metre of rain.

The US National Hurricane Centre (NHC) has warned of “catastrophic and life-threatening flooding”.

Those inundations are already cutting roads, disrupting communications, bringing down local electricity grids and leaving officials to guess what the total damage and death toll might be in isolated areas.

Some 20,000 cruise ship passengers are stranded on three liners unable to make into ports closed by the big blow.

All the Gulf’s offshore drilling platforms have been evacuated and onshore refineries shut down, leading analysts to predict a surge in energy prices until facilities that produce and process 20 per cent of US output return to normal operations.

“In terms of economic impact, Harvey will probably be on par with Hurricane Katrina,” University of Miami senior hurricane researcher Brian McNoldy said.

“The Houston area and Corpus Christi are going to be a mess for a long time.”

Even now that the winds have weakened, weather forecasters fear the system might spin back out into the Gulf, regain strength from the warm ocean waters and then veer back toward the coast and wallop Houston a second time.

“There’s absolutely nowhere for the water to go,” she said, adding that it would be some time before crews could leave their depots and fully assess the damage in coastal communities.

Melbourne University earth sciences professor Kevin Walsh told The New Daily that even allowing for the diminished wind speeds Hurricane Harvey could prove to be the most destructive weather event the US has experienced in decades.

“It looks like it’s going to hang around and produce a lot of rainfall. This is a very serious tropical cyclone,” Dr Walsh said.

Reports of damage have begun to emerge from Rockport, a coastal city of about 10,000 people that was directly in the path of Harvey when it came ashore.

A high school, hotel, senior housing complex and other buildings suffered structural damage, according to emergency officials and local media. Some were being used as shelters.

“We’ve heard rumours of 1,000 different things, we can’t confirm anything because we haven’t seen anything.

“We know we’ve got a lot of problems, but we don’t know what yet.” 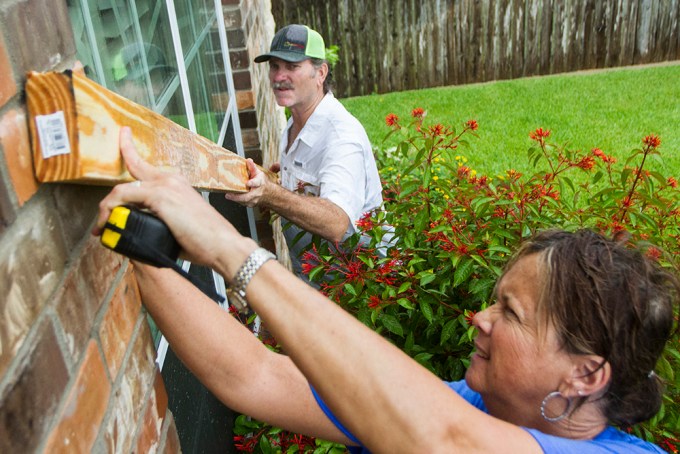 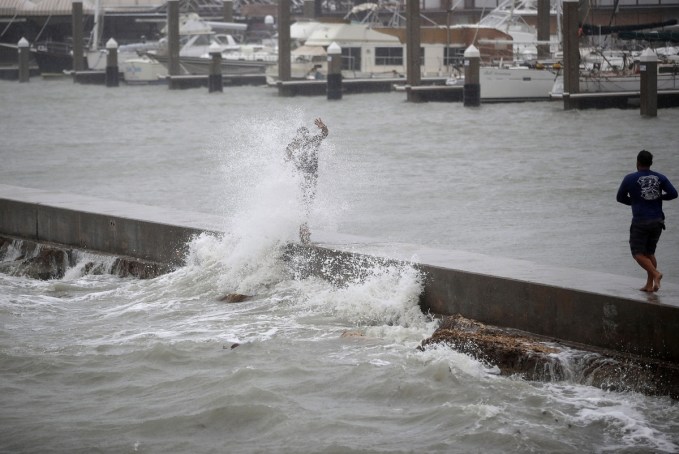 A person is hit by a wave churned up by approaching Hurricane Harvey in Corpus Christi, Texas. Photo: Getty 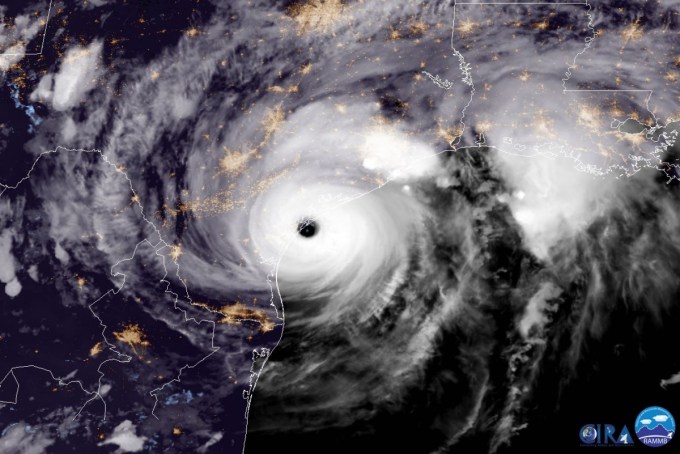 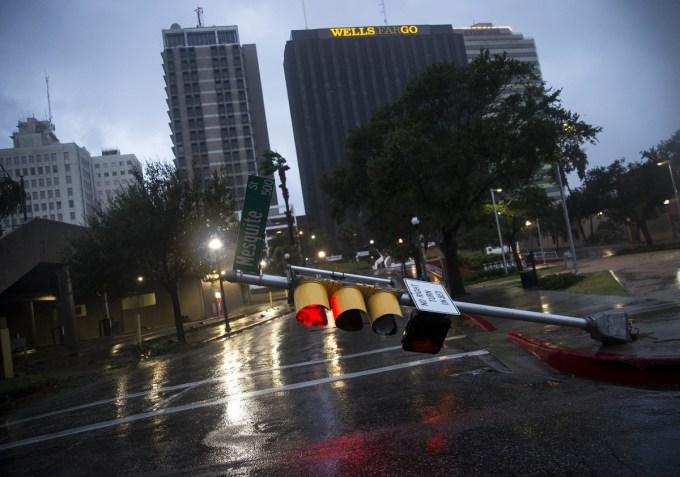 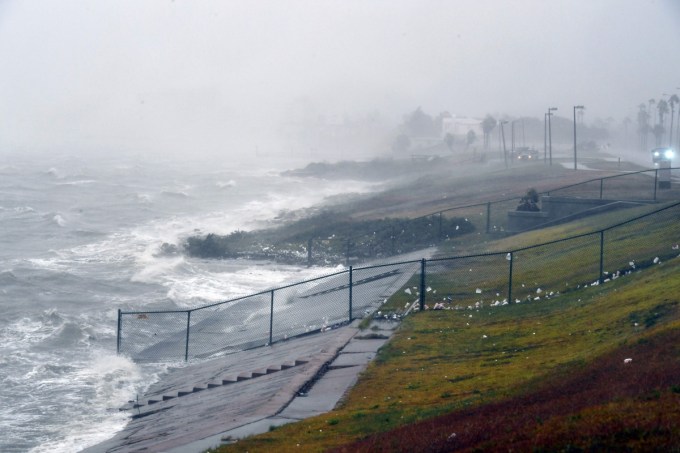 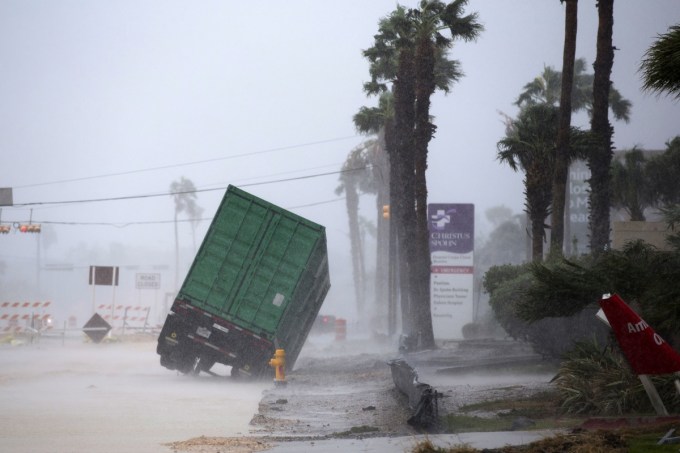 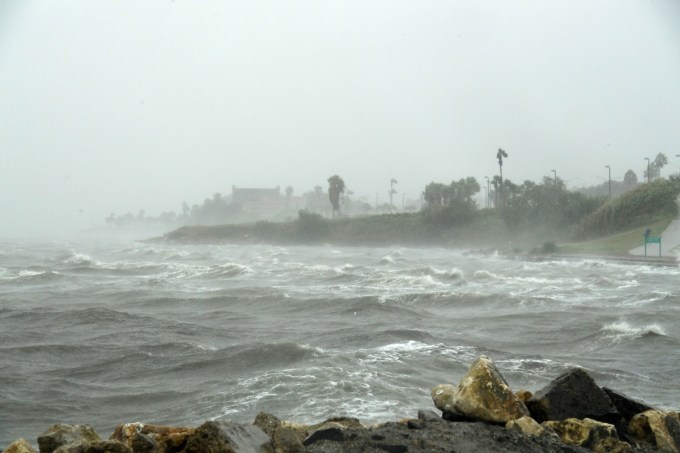 The Category 4 hurricane is packing winds of up to 215km/h and is expected to make landfall in Corpus Christi, Texas, where 320,000 residents are under voluntary evacuation. Photo: Getty

Harvey is the first significant hurricane to hit Texas since Ike brought winds of 177 kilometres per hour to the Galveston and Houston areas in 2008, inflicting $US22 billion in damage.

It is the first big storm along the middle Texas coast since Hurricane Claudette in 2003 caused $US180 million in damage.