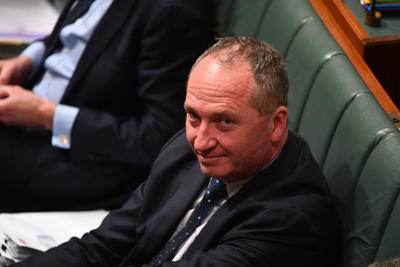 Deputy Barnaby Joyce's vote in the house was the crucial one. Photo: AAP

Deputy Prime Minister Barnaby Joyce could be named the 2018 New Zealander of the Year after receiving the second-most nominations in the national award.

It was revealed in early August that Mr Joyce was a dual citizen of Australia and New Zealand because his father was born in the country, prompting questions about his eligibility to sit in Federal Parliament.

However, it appears Australia’s neighbours across the Tasman Sea have found the funnier side in our citizenship bungle.

New Zealand of the Year award manager Glyn Taylor on Friday revealed Mr Joyce was the second-most nominated person on the prize’s long list so far. The number of nominations indicates Mr Joyce’s public support as a top Kiwi, while a judging panel will ultimately decide the winner.

“At the conclusion of the nominations period, the awards office will assess Mr Joyce’s eligibility based on his citizenship and other criteria,” he said.

“It’s also not unusual for people of the moment to attract significant support during the public nominations period.”

But Mr Taylor seemed to hint Mr Joyce wasn’t in with much of a chance.

The award is described as honouring “people for their contribution to the wellbeing of New Zealand”.

“Proven, inspirational and passionate, these are the people that New Zealanders are proud to call their own,” the New Zealander of the Year Awards website stated.

There have been 371 nominations received for next year’s honours so far and a shortlist of candidates will be announced on September 18.

At a directions hearing on Thursday, the High Court determined it would consider the future of the Deputy PM in October among other senators Matt Canavan and Malcolm Roberts and Greens Larissa Waters and Scott Ludlam.

Mr Joyce’s case will be based on whether he knew he was a citizen of New Zealand, his barrister, Gerald Ng, told the court.

The news of Mr Joyce’s dual citizenship raised the possibility of the Deputy PM having to stand down and thus forcing a by-election in his New South Wales seat of New England.

At the time Mr Joyce said he would stay on as Deputy PM due to legal advice that suggested he had a strong case.

“The government has taken legal advice from the solicitor-general,” he said.