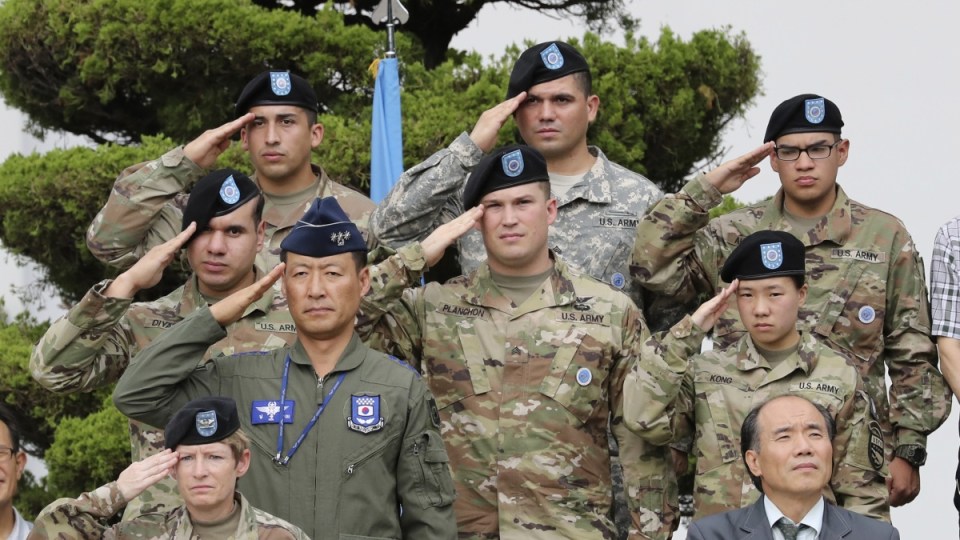 US and South Korean soldiers at a US military base in Seoul, South Korea. Photo: AAP

Australia could be embroiled in war after US President Donald Trump said on Saturday (AEST) the US military is “locked and loaded” to respond to a North Korean attack.

Prime Minister Malcolm Turnbull confirmed on Friday that if North Korean president Kim Jong-un launched an attack on the United States, Australia would join its American allies in war.

“If there’s an attack on the US, the ANZUS Treaty would be invoked and Australia would come to the aid of the United States, as America would come to our aid if we were attacked,” Mr Turnbull told 3AW radio.

Former army chief and University of Canberra Professor Peter Leahy told The New Daily the Australian Prime Minister should have to consult Parliament and the public before joining the US in what could be a “bloody ugly” war.

Given Mr Trump’s comments and North Korea’s readiness, Professor Leahy said the world could expect a conventional battle where “many people would be killed early in the piece” before a possible nuclear exchange.

The ANZUS treaty signed by Australia, New Zealand and the United States has been a cornerstone of Australian foreign policy since the 1950s.

Australian Prime Minister John Howard was the first and only leader to invoke the ANZUS treaty in the aftermath of the September 11, 2001, Islamist terrorist attacks in the United States.

The treaty says the signatories will “consult together” and “act to meet the common danger in accordance with its constitutional processes”.

However, the meaning of “act” is up for interpretation and stops short of legally committing military force.

Professor Leahy said the PM’s exercise of crown prerogative or “executive authority” of committing forces was a decision of great magnitude when the result was likely to be death and destruction.

He said Australia was on its own footing in this regard, with the US President requiring congressional approval before committing troops under the War Powers Act.

It’s reasonable the Parliament be recalled to debate such a large and important decision.

“It’s reasonable the Parliament be recalled to debate such a large and important decision,” Professor Leahy said.

Aside from Australia volunteering assistance to the US, we could also be drawn into any conflict between North and South Korea based on a dormant coalition armistice signed at the end of the Korean War.

Former deputy prime minister Kim Beazley explained this armistice in an article for The Sydney Morning Herald on Friday.

“We are still technically at war on the Peninsula but we are signatories to an Armistice, agreed with the United Nations,” he wrote.

“That concluded hostilities in 1953 on the condition that, should it break with an unprovoked attack by the North on the South, we would respond.”

Former Prime Minister Paul Keating told Fairfax he strongly disagreed with the language and approach being taken by Mr Trump against North Korea, arguing the rogue state’s nuclear proliferation was inevitable and unavoidable.

“I said in April, we should regard North Korea as a full and capable nuclear weapons state – a state that would, in future, need to be contained,” he said.

“A more worldly and competent foreign and defence policy is by far the preferred first line of defence.”

“What we’ve got is two dangerous, paranoid and unhinged world leaders goading each other into a conflict which puts the very survival of each and every person on the planet at risk,” Mr Di Natale said.