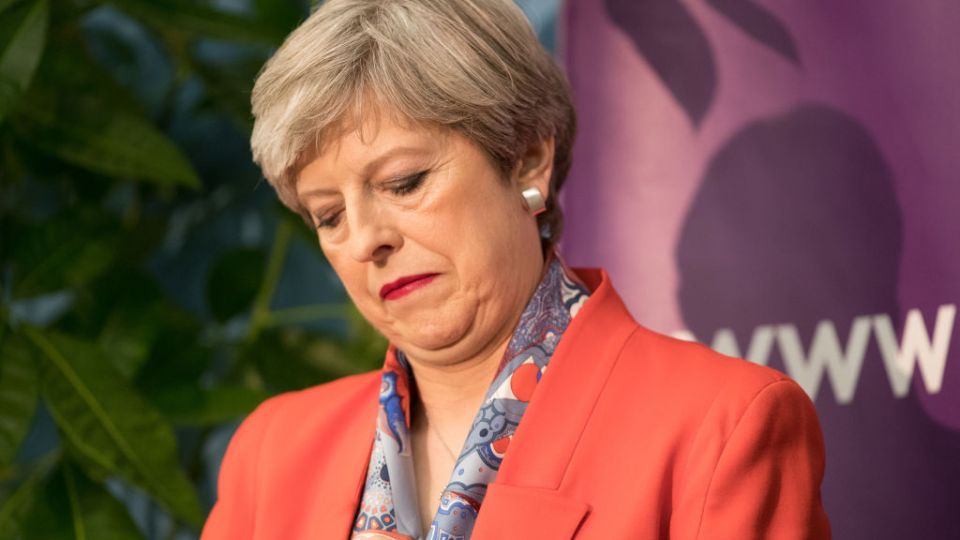 "I think she's in a very difficult place," a conservative said of Theresa May Photo: Getty

Theresa May’s gamble on a snap election has backfired spectacularly, with results indicating she has lost her grip on power and left the nation on a political knife-edge.

By 5pm AEST, the BBC predicted Ms May’s Conservatives would win 318 of the 650 House of Commons seats, eight short of a majority, while the opposition Labour Party would take 261 – producing a hung parliament and potential deadlock.

The BBC’s prediction would see the Conservatives losing 13 seats and Labour picking up 29.

The biggest loser was the Scottish National Party which lost 21 – or 37 per cent – of its 56 seats.

Some commentators predicted that Northern Ireland’s Democratic Unionist Party – on track to win 10 seats – could help Ms May to form government.

“This is perfect territory for the DUP, obviously, because if the Conservatives are just short of an overall majority, it puts us in a very, very strong negotiating position and it is one we would take up with relish,” DUP MP Jeffrey Donaldson told the BBC.

The result has cast grave doubt over Ms May’s leadership, as she called the election in April to increase her working majority and cement her authority. Many Conservatives anticipated at the time as much as a 100-seat majority.

Early speculation is that Secretary of State for Foreign Affairs Boris Johnson may challenge for leadership of the Conservative party.

Early on Friday (UK time) BBC reported that Ms May had no intention of resigning and would attempt to form a minority government. If she does succumb, she will be the shortest-serving British prime minister in almost 100 years, since Bonar Law in 1922 who served just 211 days.

The Australian’s political commentator Troy Bramston, in the UK for the election, branded Ms May’s gamble of calling an election two years before it was due as “one of the greatest political miscalculations in decades”.

Late on Friday morning (AEST) Mr Corbyn called on Ms May to resign, claiming she had no mandate to continue as prime minister.

“The prime minister called the election because she wanted a mandate,” Mr Corbyn said after retaining his inner-London seat.

“Well the mandate she’s got is lost Conservative seats, lost votes, lost support and lost confidence. I would have thought that is enough for her to go actually.”

Conservative MP Anna Soubrey said it was “a dreadful campaign” and effectively called on Ms May to resign.

“It’s a matter for her … it’s bad. I think she’s in a very difficult place … She needs to consider her position. It’s a dreadful night,” the Guardian reported.

The pound plunged 1.5 per cent against the US dollar on Friday morning due to the political uncertainty.

The situation is even more critical as Britain heads into important Brexit negotiations next week.

Nigel Farage, former leader of UKIP, said Ms May is “toast” whatever the final result, having earlier told the BBC he would consider a return to politics in the event of a Corbyn victory.

Meanwhile, even a Labour loss will still be seen a victory for Mr Corbyn. Labour’s gains could see the party keep to the left in years to come, analysts are predicting.

Darren Lilleker, associate professor of political communication at Bournemouth University, said the polls were “cataclysmic” for the Conservatives. Labour had “undermined the stranglehold of the neo-liberal societal narrative on public attitudes,” he said.

“This could represent a sea-change in the nation’s politics.” Dr Lilleker told The Conversation UK.

Ignoring his party’s smaller share of the vote and fewer seats, Deputy Labour Leader Tom Watson said Mr Corbyn had earned the prime ministership, according to Ms May’s own words. Mr Watson cited Ms May in a tweet from three weeks ago.

“She said: ‘It is a fact that if we lose just six seats, we will lose our majority and Jeremy Corbyn will become prime minister’. We do not yet know the final result, but we intend to hold her to that,” Mr Watson quoted.

“It looks likely to be a very bad result for Theresa May.

“One thing we can be sure of is that Theresa May’s authority has evaporated. She is a damaged Prime Minister whose reputation may never recover.”

“We know Theresa May can’t now negotiate Brexit for Britain because she told us losing [her] majority would destroy her authority — and it has,” he posted on Twitter.

Mr Corbyn unsurprisingly kept his seat in Islington North, with 40,086 votes to the Conservatives’ 6871.

Jane Ellison was the first government minister to lose her seat when she was defeated by Labour in Battersea.

Home Secretary Amber Rudd is at risk of losing her seat. She held on by 346 votes after five recounts.

The first conservative gain was in Scotland.

A record number of women was elected to office, while the Guardian reported national voter turnout to be around 68 per cent and BBC reporting a relatively high youth (18-25) turnout at 72 per cent.

Sportsbet and other betting agencies at one point tipped Mr Corbyn to be the next prime minister, but mostly maintained Ms May as favourite.

In his first tweet after polls closed, Mr Corbyn said the Labour campaign had changed politics for the better —  whatever the result.

“I want to say thanks to everyone who voted for our manifesto and its radical vision for a fairer Britain. Our team has worked so hard on this campaign — from door knocking to social media — and it’s great we have won so much support across the country,” Mr Corbyn said.

After retaining Islington North, he said people were turning their backs on austerity politics.

Claiming victory for her seat in Maidenhead, Ms May said the Conservatives would fulfil its “duty” to ensure stability.

“If the Conservative party has won the most seats and the most votes it will be incumbent on us to have a period of stability. And this is what we will do,” Ms May said.

“At this time, more than anything else, this country needs a period of stability. And if, as the indications have shown, and this is correct, that the Conservative party has won the most seats, and probably the most votes, then it will be incumbent on us to ensure that we have that period of stability and that is exactly what we will do.”

The Sun‘s front page on Friday bannered the word “Mayhem”, after the conservative paper punted for Ms May. The Sun later updated its front page to read: “Theresa Dismay”.

The Daily Mail, which also backed Ms May, ran the headline “gamble that backfired” on Friday.