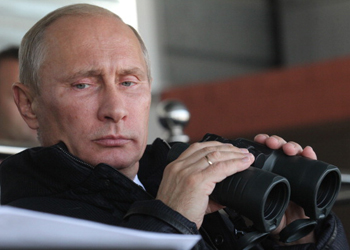 Vladimir Putin says he inquired about Russia joining NATO when then US President Bill Clinton visited Moscow in 2000. Photo: Getty

Vladimir Putin has conceded  “patriotically minded” Russian hackers could have tampered with the US election, as former UKIP leader Nigel Farage is named as a person of interest in the FBI probe into the matter.

The Russian President insisted his government had no involvement, but acknowledged it was “theoretically possible” tensions could have prompted some individuals to launch cyber attacks.

“Hackers are free people, just like artists who wake up in the morning in a good mood and start painting,” Mr Putin said at a meeting with international news agencies.

“The hackers are the same. They would wake up, read about something going on in interstate relations and if they feel patriotic, they may try to contribute to the fight against those who speak badly about Russia.”

Mr Putin argued that hackers couldn’t sway election outcomes regardless, because the public opinion isn’t that easy to manipulate.

“No hackers can have a radical impact on an election campaign in another country,” Mr Putin said.

The concession comes as The Guardian reports the former leader of UKIP, Nigel Farage is a person of interest in the US investigation into possible collusion between Russia and Mr Trump’s presidential campaign.

Mr Farage has not been accused of wrongdoing and was not a suspect or target of the US investigation, according to the reports. However, he may have relevant information, investigators believe.

The former leader of the UK Independence Party had “raised the interest” of FBI investigators due to his connections with Mr Trump and Julian Assange’s Wikileaks, which published leaked emails from the Democratic National Committee during the campaign.

Mr Farage said on Twitter it had taken him a long time to read the Guardian article because he was “laughing so much at this fake news”.

“This hysterical attempt to associate me with the Putin regime is a result of the liberal elite being unable to accept Brexit and Trump,” he said.

“I consider it extremely doubtful that I could be a person of interest to the FBI as I have no connections to Russia.”

But The Guardian quoted one source saying: “One of the things the intelligence investigators have been looking at is points of contact and persons involved.

“If you triangulate Russia, WikiLeaks, Assange and Trump associates the person who comes up with the most hits is Nigel Farage.

“He’s right in the middle of these relationships. He turns up over and over again. There’s a lot of attention being paid to him.”

Mr Farage, who campaigned for decades for Britain to leave the European Union, was a vocal backer of Mr Trump, appearing on the campaign trail and meeting him in New York soon after the election victory.

Accusations that Russia interfered in the US 2016 presidential election have dogged Mr Trump since he entered office and a former FBI chief, Robert Mueller, has been named as special counsel to investigate any collusion.

Mr Putin alleged that some evidence pointing at Russian hackers’ participation in cyber attacks – he didn’t specify which – could have been falsified in an attempt to smear Russia.

“I can imagine that some do it deliberately, staging a chain of attacks in such a way as to cast Russia as the origin of such an attack,” Mr Putin said.

“Modern technologies allow that to be done quite easily.”

Mr Trump has dismissed the notion that Russia played any role in his November election victory.

Hillary Clinton is warning the technological forces which she insists sabotaged her presidential bid in 2016 are still very much at play.

“I think it’s important to learn the real lessons from this last campaign,” she said in an interview on Wednesday at the Code Conference in California.

“The forces aren’t just interested in influencing elections and politics. They’re going after the economy and our unity as a nation.”

Mrs Clinton described how a massive Russian-led misinformation campaign scuttled her chances with the help of social networks that aren’t properly empowered to combat fake news.

“What we saw in this election particularly the first time we had the tech revolution really weaponised politically,” Mrs Clinton said.

“It was aimed at me but it’s a much deeper more persistent effort to literally turn the clock back on so much of what we have achieved as a country.”

Mrs Clinton also singled out Mr Putin for having big ambitions that go way beyond her in his pursuit of destabilising the country.

“It is important that Americans, that people in tech and business understand that Putin wants to bring us down,” she warned. “He is an old KGB agent.”

Vladimir Putin admits Russian hackers may have meddled in US election