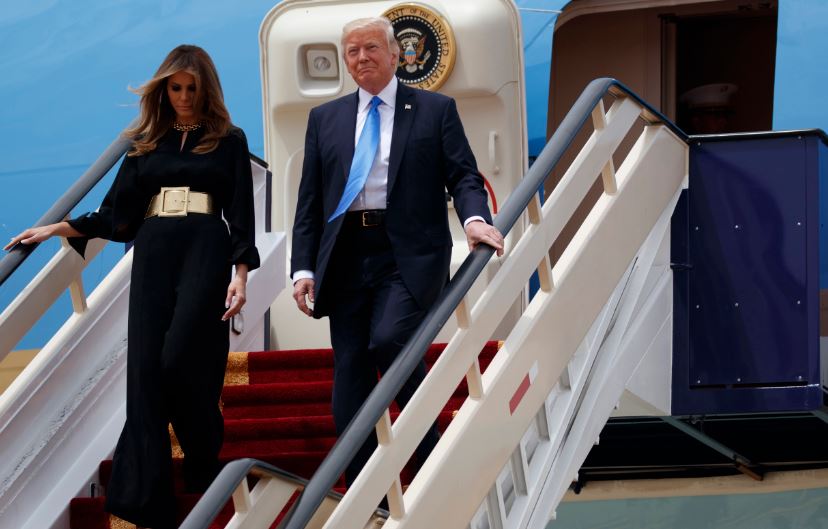 US President Donald Trump is embarking on a worldwide ‘daddy daughter trip’ with daughter and assistant Ivanka, leaving chaos and uncertainty at the White House.

Mr Trump, wife Melania and daughter Ivanka boarded Air Force One on Friday afternoon bound for some of the world’s most sacred and religious nations – Saudi Arabia, Israel, Italy and Belgium – without naming a new FBI director following the shock firing of FBI director James Comey.

Mr Trump said he would be “strongly protecting America’s interests” as he prepared to leave the US for the first time since becoming President in January.

Getting ready for my big foreign trip. Will be strongly protecting American interests – that's what I like to do!

Mr Trump will meet with King Salman of Saudi Arabia, President Reuven Rivlin of Israel in Jerusalem and Pope Francis at the Vatican including a tour of St Peter’s Basilica.

He will also be attending a NATO summit in Brussels, Belgium and a G7 summit in Taormina, Italy.

A senior adviser to the president said Ivanka Trump would hold a roundtable discussion with Saudi women about women’s economic issues during the President’s first international trip.

The president’s daughter, who converted to Judaism to marry husband Jared Kushner, reportedly needed the rabbi’s blessing before flying on the Sabbath.

Looking forward to a meaningful visit to the Middle East and the Vatican in promotion of religious tolerance globally pic.twitter.com/BZWDTI0j8m

Mr Kushner is reported to have organised most of the trip and will be involved in keeping the President “on track”.

On Friday the White House said Mr Trump would not announce a candidate before leaving the US.

Earlier, the New York Times reported the US President had told Russian officials Mr Comey was a “nut job” whose ouster relieved “great pressure” on him.

Both Republics and Democrats have criticised the decision amid the FBI’s investigation of Russian influence in the 2016 presidential election.

Allegations include he pressed Mr Comey to stop investigating former national security adviser Michael Flynn and the subsequent appointment of special counsel to look into the alleged meddling.

“We’re very close to an FBI director,” Mr Trump said on Thursday when asked about the search during an Oval Office appearance with Colombian President Juan Manuel Santos.

He said an announcement could come “soon” and that former senator Joe Lieberman was among the candidates.

Author Salman Rushdie stabbed in the neck by masked assailant on stage
Melbourne society icon Lillian Frank dead at 92
Foreign Minister Penny Wong vows to keep working to free Aussie journo Cheng Lei from Chinese jail
Cameron Smith and fellow Aussies in the thick of it at PGA’s Memphis tournament
Taiwan thanks US for maintaining regional security in the face of Beijing’s bullying
Ex-Liberal staffer: Survivors weren’t asked about their ordeals in NSW parliament
US fighter jets scrambled over Hawaii after man attempts to get into plane cockpit
Today's Stories