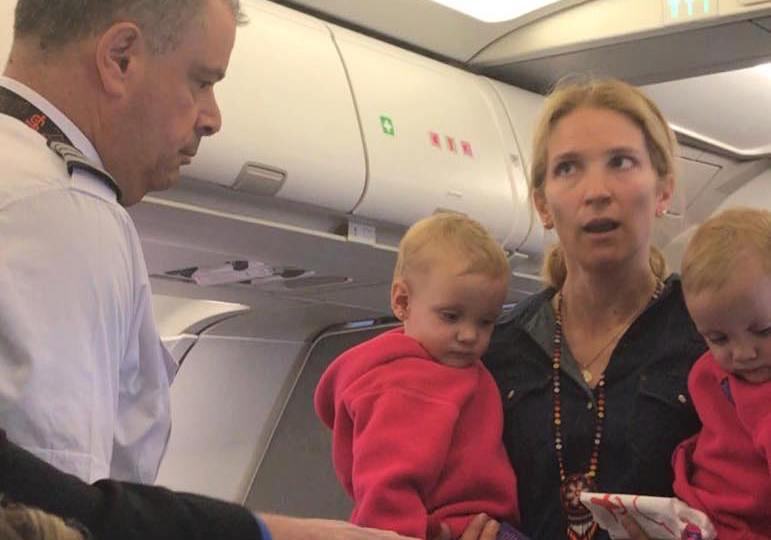 A mother and a baby were involved in the altercation. Photo: Facebook/Surain Adyanthaya

American Airlines has suspended an employee after a video showed an altercation on one of its planes involving crew, several passengers and a crying woman carrying a young child.

The employee violently took a stroller from the woman, hitting her with it and just missing her child, Facebook user Surain Adyanthaya said in a post accompanying the video he put on the site on Friday.

In a statement the US-based airline said it had seen the video and had removed the team member from duty while starting an investigation to “obtain the facts”.

“The actions of our team member captured here do not appear to reflect patience or empathy,” the airline said in a statement.

Mr Adyanthaya’s video captured the mother holding a child in her arms and sobbing at the front of Flight 591 from San Francisco for Dallas.

In another Facebook post, Mr Adyanthaya alleged the flight attendant “violently took a stroller from a lady with her baby on my flight, hitting her and just missing the baby”.

The video captured the moments after the alleged altercation.

“Just give me back my stroller please,” the woman cries in the footage.

Another unidentified male passenger in the Facebook video gets up from his seat and intervenes, “Hey, Sir, I’m not going to sit here and watch this stuff.”

“What’s the guy’s name that hit the stroller. I want to know his name personally,” the man continues, before confronting a uniformed employee and saying, “You do that to me and I’ll knock you flat.”

The uniformed employee tells the passenger to “stay out of it”, “keep quiet” and “you don’t know what the story is” before encouraging the passenger to, “go ahead and hit him”.

The passenger backs down, but adds, “you hurt a baby” and “maybe you’ll get video taped and it will go all over the news”.

Mr Adyanthaya said the mother and her two children were escorted off of the flight, but the alleged employee was let back on board.

It comes a day after reports of an American Airlines passenger shoving a pilot at Kansas City International Airport.

Less than two weeks ago, a 69-year-old doctor, David Dao, was hospitalised after Chicago aviation police dragged him from a United Airlines plane sparking international outrage and a public relations nightmare for the carrier.

Sobbing mum and baby are latest victims of flight-crew turbulence