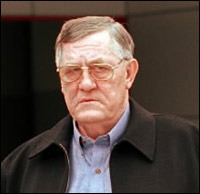 Stephen Asling has been found guilty of the 2003 Melbourne gangland murder of Graham "The Munster" Kinniburgh (pictured). Photo: AAP

Stephen Asling has been found guilty of murdering Melbourne underworld figure Graham Kinniburgh more than a decade after he was gunned down on Carl Williams’ orders.

Asling was found guilty of Kinniburgh’s 2003 murder by a Victorian Supreme Court jury on Saturday.

At trial, the prosecution said drug kingpin Carl Williams had arranged the contract killing of Kinniburgh for $150,000 and hired Asling and the now-dead Terrence Blewitt to do the job.

A witness who spent time behind bars with Asling testified that Asling had made a jail yard confession.

“He goes, ‘I did this but they have no proof because I’m the best sneako’,” the witness told the trial.

The witness said Asling, whom he knew as “Aso” in the jail yard, told him that on the night Kinniburgh was killed he went to the movies with his girlfriend then sneaked out through the back door.

Another key witness who implicated Asling said he knew there was a contract on Kinniburgh’s life but never warned him.

The key witness was “friendly” with Kinniburgh and shared the occasional meal with him.

But even though he had known for months a contract was out on “The Munster’s” life, he didn’t warn him because he was “minding my own business”.

The witness said Asling told him how he and Blewitt ambushed Kinniburgh outside his home on the night of his death before shooting him dead.

A third witness said Williams asked him to monitor Kinniburgh at his Kew home, which he did with the help of binoculars.

Williams also asked the man, who befriended Williams while they were both in jail, to monitor Lewis Moran and his son Jason Moran.

Williams harboured a “deep-seated hatred” for the Morans which also extended to their associates, the witness told the jury.

The witness said Williams supplied Asling and Blewitt with a bag containing two guns, speed and cash believed to be $20,000.

Sybil Kinniburgh said she heard three loud bangs outside their Kew home on the night her husband of 36 years was killed – December 13, 2003.

She investigated, but couldn’t see or hear anything, and returned to bed to read her book.  It was only later when police knocked at the door that she learnt her husband had been shot dead.

The murder was part of the 1995–2004 gangland war in Melbourne, which was later featured in the Underbelly television series.