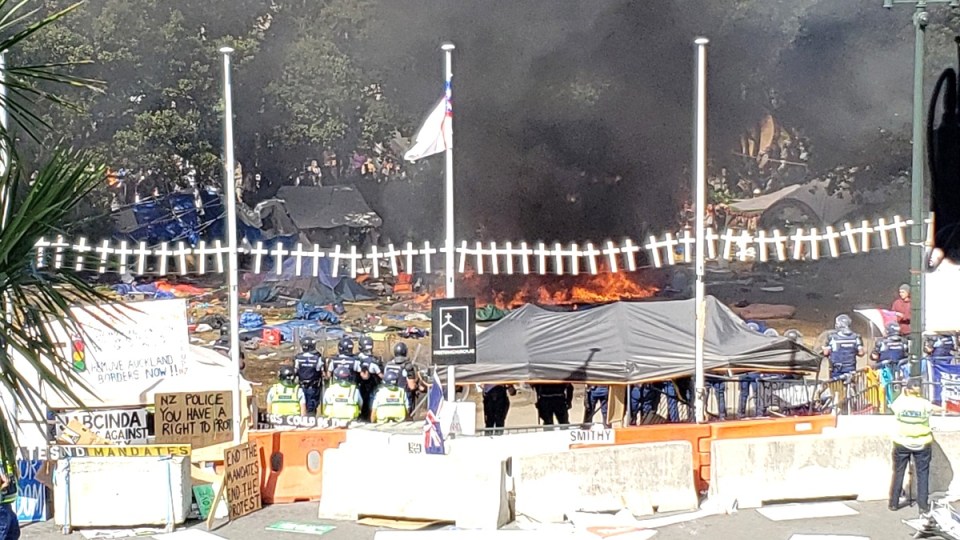 The scene outside NZ's parliament on Wednesday afternoon. Photo: Twitter

There have been wild scenes and violence in New Zealand as anti-vaxxers lit fires on the parliamentary lawns and defied a police move to break up their 23-day occupation of the grounds.

Riot police stormed the grounds in central Wellington on Wednesday afternoon (local time), as protesters lit multiple fires and fuelled them with equipment from the illegal campsite – reportedly including gas cylinders.

Police were also seen seizing tents and other material from the protest as the clash carried on into the afternoon.

The violence came after police launched a pre-dawn raid to clear the protest. NZ Police commissioner Andy Coster said a dangerous element had infiltrated the group of several hundred, prompting the abrupt end to weeks of patient negotiation.

“In the last week we have seen a changing mix in the makeup of the crowd … those with good intentions are now outnumbered by those with the willingness to use violence,” he said.

“The harm being done far outweighs any legitimate protest,”

By afternoon, the protesters proved Mr Coster right, setting fire to tents and structures they had built on the lawns.

They also burned the $465,000 slide erected two years ago to make parliament more family-friendly, sending a thick black smoke into the air and into parliament house.

While three officers were injured earlier in the day, they returned to the frontline, and there are yet to be any reports of serious injury.

The clash began at 6.06am (8.06am AEDT), when protest organisers sent a simple message through its organising social media channel – “WAKE UP” – followed by “All who can be on the ground need you all now please” at 6.31am.

Confronted by police in riot gear, protesters dug in to resist. They formed human chains and confronted officers at various flashpoints around parliament, while a police helicopter hovered overhead.

At least one attack on media was reported. A cameraman from NZ news website Stuff was reportedly assaulted by a protester, who said “this wouldn’t have happened if you guys had told the truth”.

Officers used pepper spray against protesters, which Mr Coster said was in response to police being sprayed with a fire extinguisher.

“Our message to those who do not want to be caught up … is please go home,” Mr Coster said.

Many chose to do that, leaving a hardcore crew of a few hundred behind. About 40 were also arrested, while 30 vehicles were towed.

Protesters retained control of loudspeakers outside the parliament buildings, playing songs such as Amazing Grace and Don’t Stop Believing.

After clearing nearby streets of cars and structures erected by protesters, police with riot shields moved in on the lawns about 3pm.

Protesters threw chairs at police, who said they also found makeshift weapons among the group. They reportedly included a cord set up as a trip wire, paint-filled projectiles, homemade plywood shields and pitchforks.

It was then the already sad scenes took a turn for the worse, with protesters lighting fires before fleeing the scene.

Some went to the nearby Wellington railway station, which they had declared a “safe zone”. Later on Wednesday, hundreds were stilling milling around in the area, with the mood described as “anarchic”.

“They have a sense there is nothing left to lose,” Stuff journalist George Block said.

The “Convoy 2022 NZ” protest began on February 6, New Zealand’s national day, when hundreds of protesters took off from the furthest points of the country to descend on Wellington.

They reached parliament two days later to protest on the first day of the parliamentary year – and had remained there since.

They set up camp on the parliament grounds, leaving their cars on CBD streets, and installing all sorts of facilities in readiness for a long stay.

That included laundry, daycare, food and coffee trucks. There were also crystal healing tents, cryptocurrency stalls, a playground for children, and even toilets plumbed in the middle of a road into Wellington’s sewerage system.

To the irritation of many Wellingtonians, the local university and businesses, protesters staged daily rallies to shout invective at the government, journalists and health officials.

They regularly called for Prime Minister Jacinda Ardern and government MPs to be tried and executed.

They have thrown human waste at police officers and abused children for wearing masks as they walk to school.

“They have been given ample opportunity to leave [and] it is time for them to go,” she said.

“The protest has been at times violent and increasingly fuelled by misinformation and sadly conspiracy theories.”

The protest has coincided with New Zealand’s biggest outbreak of the COVID-19 pandemic.

There were 22,152 community cases reported on Wednesday – the first time in the pandemice NZ has had more than 20,000 local infections. Across the country, 405 people are in hospital with the virus.

At least 20 protesters, many of whom are unvaccinated, and all of whom are maskless, have tested positive to the virus during the occupation.

Health officials say their unwillingness to get tested masks the true number, and COVID-19 is rampant among protesters.

Some protesters delusionally believe they have caught “radiation poisoning” from what they allege are government-installed towers to make them sick.