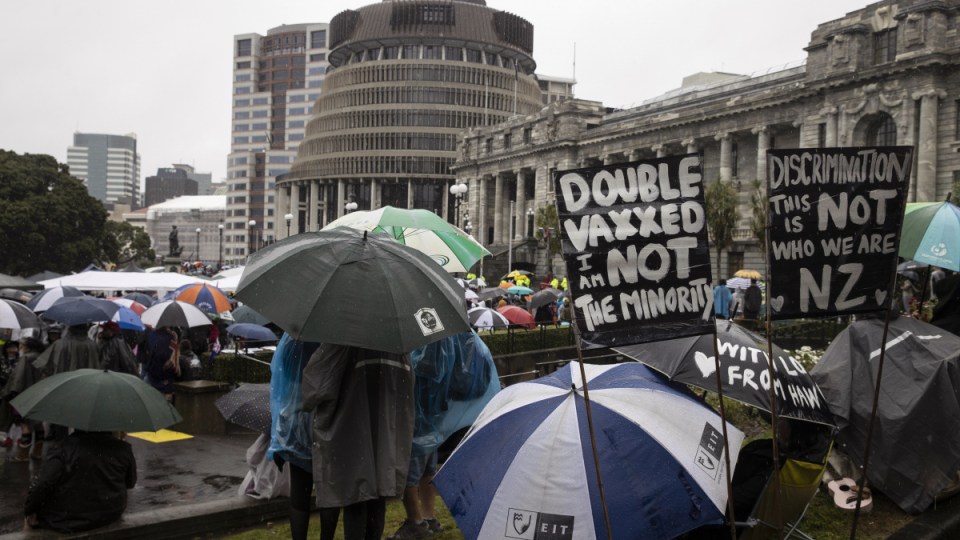 Protesters outside New Zealand Parliament in Wellington are not planning to leave any time soon. Photo: AAP

New Zealand police have defended their handling of the anti-vaccine occupation outside parliament, which has grown to include neighbouring streets in Wellington and is acting as a beacon for radical elements.

Convoy 2022 NZ is no ordinary protest.

It has grown to resemble a tent city or music festival, complete with portaloos, laundry centre, food distribution, yoga centre, daycare, and even a herb garden constructed with planter boxes.

Tents have been set up in many nearby parks and vehicles left illegally sitting in a string of inner-city streets, much to the anger of residents and businesses.

On the lawns, protesters stage daily rallies, with orators interspersed with music.

One minute, a man with a microphone calls for the government to be overthrown.

The next, One Love by Bob Marley and the Wailers wafts through speakers across the lawns, as the assembled sway, clap and sing.

Protesters have issued the government with an unreasonable and lengthy list of demands, the centrepiece being the removal of mandates employed to increase vaccination rates.

Those mandates apply to almost half of New Zealand’s workforce – including education, health, police and military – and also to Kiwis who wish to visit public facilities, gyms and eateries.

Prime Minister Jacinda Ardern said she won’t scrap them. Nor will she engage with the protesters – and she has repeatedly asked them to leave in the past fortnight.

“They have made their point. It is time to go home,” she told TVNZ.

Ms Ardern, who has maintained a public health focus through the pandemic, said NZ’s record virus numbers – with 2365 cases on Monday – showed the need for restrictions.

“We are in the middle of a growing pandemic,” she said.

“Now is not the time to pull down our armour and nor will we do it because people are camping on the front lawn.”

Police are also keeping the protest at arm’s length.

Until Monday, they had made just one serious attempt to confront protesters. On day three they arrested 120 people, including a handful who attempted to enter parliament to confront politicians.

Commissioner Andy Coster said he was committed to “de-escalation”.

“There’s no doubt this protest is unlawful and unreasonable. But the law does protect our right to protest and it’s a balancing act,” he told TVNZ’s QandA.

“Our focus is to get the safest resolution for all concerned.”

Mr Coster is under pressure to end the protest, which has a dangerous and worrisome edge.

Protesters, who do not wear masks despite increasing community transmission of COVID-19, repeatedly abuse those who do, including schoolchildren.

They frequent businesses and public transport without masks, rendering them unsafe for everyday Wellingtonians.

Worse, protesters have called for the death of politicians, particularly Ms Ardern, and journalists, they have made anti-Semitic remarks – some have even compared Ms Ardern with the Christchurch mosques terrorist.

The protest has come to be a catch-all for groups aggrieved with government. On two points they are united – they want an end to vaccine mandates, and they are in denial about the efficacy of the vaccine.

They insist the COVID-19 vaccine does not work or is being imposed on children, which is not the case.

For allowing the illegal occupation to continue, Mr Coster has earned the nickname “cuddles Coster”.

The 46-year-old said his commitment to non-aggressive policing came from the aftermath of New Zealand’s infamous 1981 Springbok rugby tour, which pitted teams selected on the basis of race.

More than 150,000 New Zealanders protested, with tensions boiling over at multiple flashpoints and rallies.

“It led to a long-term loss of confidence in police,” he said.

“The situation in front of us could very readily become the same with the police enforcement intervention. I want us to explore all reasonably options before we end up there.

“This protest is pretty unprecedented in terms of its nature and tactics.

“Of course, we can look at it in hindsight now and say it shouldn’t have got to this. But if we look at the decision points along the way, I’m confident the right things have been done at the right time.”

Ms Ardern and Police Minister Poto Williams have repeatedly given their support for Mr Coster, even as the impasse appears hard-set.

Each day parliament’s grounds swell with new faces who have travelled in for the day, especially on weekends. Others come from further afield with tents and marquees, intending to stay for longer.

On Monday morning, police drew a line in the sand.

At 3.30am, they took concrete barriers to the edge of the protests on crucial intersections, effectively setting a border.

Protesters resisted, with some throwing human waste at officers, and others’ pulling off face masks.

Police say there was a handful of arrests.

As the occupation continues, so does New Zealand’s vaccination rollout.

As of Sunday, 96 per cent of Kiwis aged 12 and over were double-dosed against COVID-19, with more than 2.1 million receiving their booster shot.