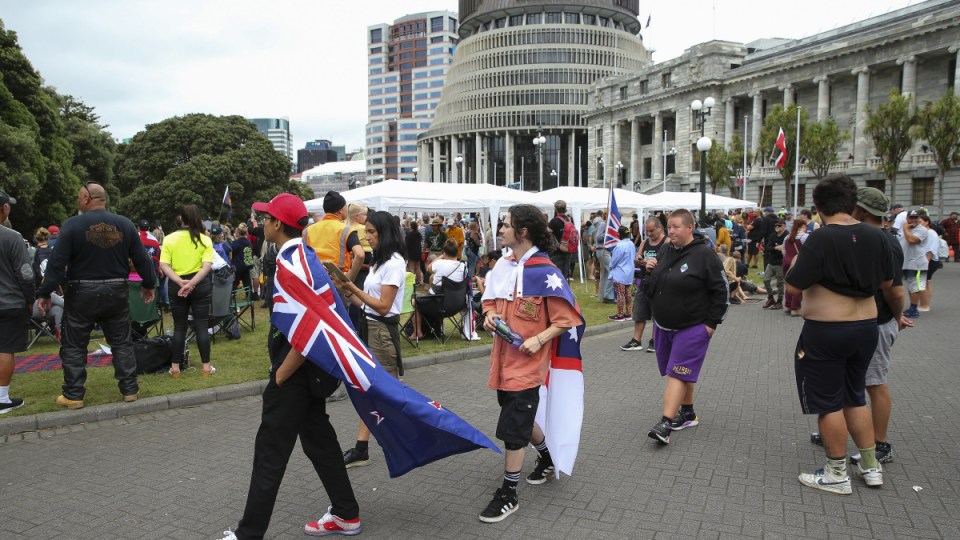 New Zealand Prime Minister Jacinda Ardern has a message for anti-vaccine protesters after a week of them occupying the lawns of the nation’s parliament: Go home.

Nearby cars and trucks sit unused on the streets of Wellington’s CBD, having been left since last Tuesday.

Protesters have endured fierce storms over the weekend.

A nearby rain gauge showed the highest one-day accumulation of rain since World War II on Saturday, as Wellington was battered by the tail of ex-cyclone Dovi.

The protesters worked together to resist police and fight the elements, with a network of supporters providing food, clean clothes and even an entertainment schedule to keep morale high.

The number of protesters drops overnight to the low hundreds, but they are joined by others during the day when they gather, shout invective at passers-by, give incendiary speeches, sing and dance.

Ms Ardern said the right to protest was important in New Zealand but this was “beyond a protest” and she considered them “an extreme group”.

“I think we all want them to leave,” she told Radio NZ.

It came as New Zealand’s Omicron wave began to gather pace. The country confirmed a record 981 COVID cases on Monday – up from Sunday’s previous record of 810.

There are 39 virus patients in NZ hospitals, with none in intensive care.

New measures will include more use of rapid tests, cutting isolation periods from 10 days to seven and more self-management for positive cases.

On Monday, she said messages calling for MPs and journalists to be hanged, and blatant misinformation around both the COVID-19 vaccine and the government’s response, told her the protesters “were not interested in policy development”.

“New Zealand is a place where protest is part of who we are. Some of our greatest movements have been born of people movements, many of which have entered the forecourt of parliament,” she said.

“What I’m seeing is some kind of imported form of protest.

“We’ve seen Trump flags, Canadian flags … children and young people on the way to school are being abused, businesses are seeing people occupy their spaces.”

Police have managed the group since last Tuesday, making 120 arrests on Thursday in an attempt to clear the grounds, but few since.

Ms Ardern has left management of the protest to police, saying it is an operational matter for officers to deal with.

However, one of her MPs – Speaker Trevor Mallard – has been provoking the protesters by blaring annoying music through parliament’s speakers all weekend.

On Sunday, NZ police distanced themselves from the novel strategy, when superintendent Corrie Parnell said it was “certainly not a tactic we would encourage and certainly endorse”.

It remains to be seen how police will coerce the protest to leave, though it appears one impasse may soon be resolved.

News outlet Stuff reports police have commandeered a car park at nearby Sky Stadium for the protesters’ use, which might allow for roads to be cleared.

Ms Ardern said her government wouldn’t negotiate with the group, and wouldn’t set a date to end vaccine mandates, which is the group’s primary demand.

“Do I believe they should be there? No. Should they go home? Yes. Especially the children.”

No end in sight to NZ anti-vaccine protest