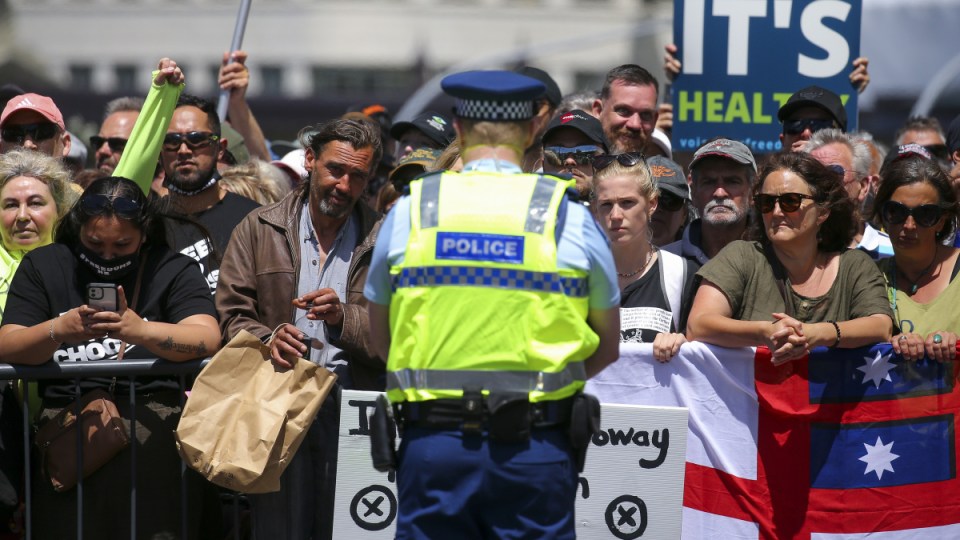 New Zealand beefed up security at its parliament on Tuesday as thousands gathered in a noisy protest against COVID vaccine mandates and lockdowns.

All but two entrances to the parliament building in Wellington, known as the Beehive, were closed amid high levels of police and security personnel, as mostly unmasked protesters marched through the CBD and congregated outside parliament on Tuesday.

Speaker of the house, Trevor Mallard, said it was the biggest increase in parliamentary security he had seen since his election in 1984.

Earlier in the day, at protests across the country, both police and the media were attacked.

In Auckland, which has been in lockdown for weeks, a police officer was bitten by a protester. Police said in a statement that about 50 protesters had arrived at the lockdown border, and blocked traffic.

“The actions of protesters required our staff to physically intervene to move them off the road. In the process one of our officers has been bitten by an as yet unidentified protester, they said.

“Actions like this are totally avoidable and poses unnecessary risk to our staff who are simply trying do their part in preventing the spread of COVID-19.”

Elsewhere, Stuff, one of the country’s largest news organisations, said one of its photographers was grabbed and abused by protesters in Wellington. It followed threats to a news cameraman in Greymouth, on the west coast of the South Island at the weekend.

But Tuesday’s demonstration was mostly peaceful. It was also loud – punctuated by the noise of high-powered motorbikes ridden by gang members. With NZ’s parliament often providing protesters with microphones, Prime Minister Jacinda Ardern said she could hear it from her office.

“What we saw today was not representative of the vast bulk of New Zealanders,” she said.

“There’s a lot of people who are just keen to do the right thing and get vaccinated,” she said.

“The vast majority of the people there today are there for peaceful purposes and are not inciting any violence or hatred against any people or the Prime Minister.”

Many people held signs and placards – with messages such as ‘Freedom’ and ‘Kiwis are not lab rats’ and including a surprising number of pro-Donald Trump flags. Marchers shouted slogans as they demanded Ms Ardern’s government roll back compulsory vaccination and lift restrictions.

“I will not be coerced and I will not be forced into taking something I don’t want in my body,” one protester said.

New Zealand has struggled to fight off an outbreak of the highly infectious Delta variant of COVID, forcing Ms Ardern to move from a strategy of elimination through lockdowns to living with the virus with higher vaccinations.

Last month, she said the country would require teachers and workers in the health and disability sectors to be fully vaccinated against the virus, and has pledged to end restrictions only after 90 per cent of the eligible population is inoculated.

That threshold is higher than many other countries and has invited criticism from people calling for more freedoms, while the mandate will be a hurdle for those looking to get back to work but still avoiding the jab.

New Zealand still has among the lowest number of COVID-19 cases in the world with fewer than 8000 reported and 32 deaths.

It had 125 more cases on Tuesday and its total double-dose vaccination rate has reached nearly 80 per cent of its eligible population.

The territory’s cluster grew by one case to four on Tuesday, after a close contact of the index case fell ill in quarantine.

Mr Gunner said the “new case was not a threat” and the lockout would end as planned at 11.59pm on Tuesday.

He said the man had been in quarantine while infectious and there were no new close contacts or exposure sites.

“I’m also pleased to be able to report that all of the other indicators in greater Darwin are excellent,” Mr Gunner said.

Wastewater testing is negative for the virus, and two pubs and a restaurant the source case visited have been downgraded from close contact to casual contact sites.

“With all of the above factors in mind, we can move out of the greater Darwin lockout with confidence that we’ve traced and tracked the virus,” Mr Gunner said.

Face masks will need to be worn until 5pm on Friday in most public places.

Health restrictions were imposed in Greater Darwin and Katherine, 320 kilometres to the south, late on Thursday after an unvaccinated man in his 20s contracted the virus without leaving the NT.

Katherine was fully locked down, along with unvaccinated people in Greater Darwin, until the source was found to be a woman who had flown to the NT from Cairns.