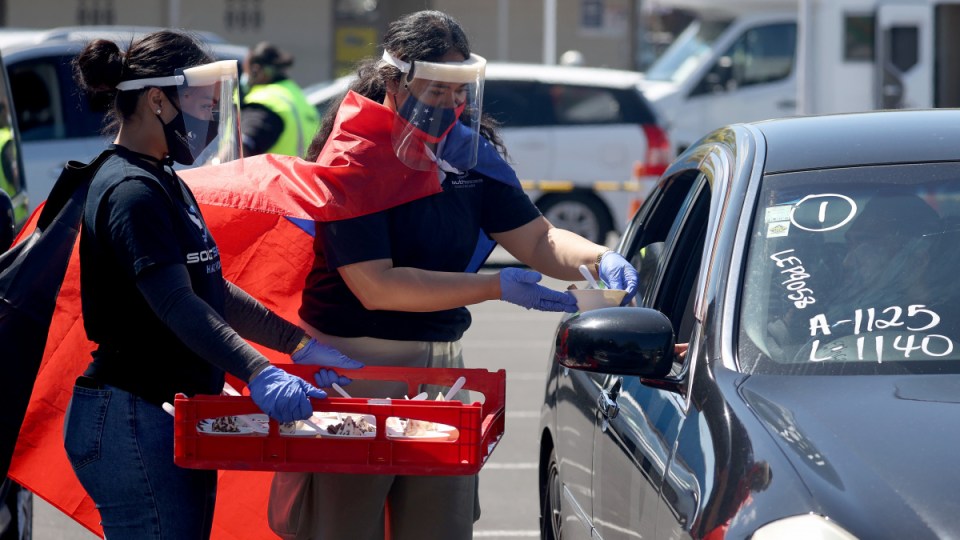 Volunteers hand out food at a mass vaccination day in Auckland. The city is 89 per cent partially vaccinated against COVID. Photo: Getty

New Zealand will shoot for the stars, unveiling a 90 per cent vaccination target before it will shift away from widespread lockdowns to control COVID.

The strategy switch-up comes as Auckland grapples with a Delta outbreak that has brought New Zealand’s worst daily case counts and hospitalisations of the pandemic.

There were another 129 local infections in New Zealand on Friday – 120 in Auckland and the remainder in the adjacent Waikato region. It was another record case tally for the country, as numbers have risen steadily this week.

Under the country’s new traffic light system, Auckland will be the first movers, shifting from alert level three to “code red” when 90 per cent of residents aged 12 and over are fully vaccinated against COVID-19.

“This is within Auckland’s grasp.”

Auckland entered lockdown on August 18 and on this timetable would notch 100 days under stay-at-home orders.

Ms Ardern has foreshadowed the shift away from NZ’s alert level system to the traffic light system, badged as the “COVID-19 Protection Framework”.

Ms Ardern said Kiwis would notice three major differences under the framework, which will grade all parts of the country at green, orange or red.

The first is the use of vaccine certificates. They will allow vaccinated Kiwis to return to a largely normal life, while restricting unvaccinated to the bare necessities.

The second is that businesses will be able to operate at any colour.

The third is the abandonment of nationwide lockdowns in favour of “highly targeted and very localised” restrictions, if need be.

“If you want summer, if you want to go to bars and restaurants, get vaccinated,” Ms Ardern said.

“If you want to get a haircut, get vaccinated.

For the entire country to shift to the traffic light system, all of New Zealand’s 20 health regions (known as district health boards) must also hit 90 per cent.

“We’re all in this together. We need to reach these high rates together so we can protect each other,” Ms Ardern said.

Nationwide vaccine rates stand at 83 per cent partially vaccinated and 65 per cent double-dosed, as of Thursday.

The surprise absence from Friday’s announcement was the lack of a dedicated Maori vaccine target.

Maori are particularly vulnerable to worse health outcomes, and have been overrepresented in the Delta outbreak.

While director-general of health Ashley Bloomfield previously signalled his desire for additional benchmarks – for Maori, for Pacific communities, the elderly and isolated communities – above a general vaccine target, Ms Ardern said adopting the traffic light system was based on his advice.

Instead, the government will spend $NZ120 million ($A115 million) to get Maori vaccinated, and hopes the use of the 20 health regions will give good nationwide coverage.