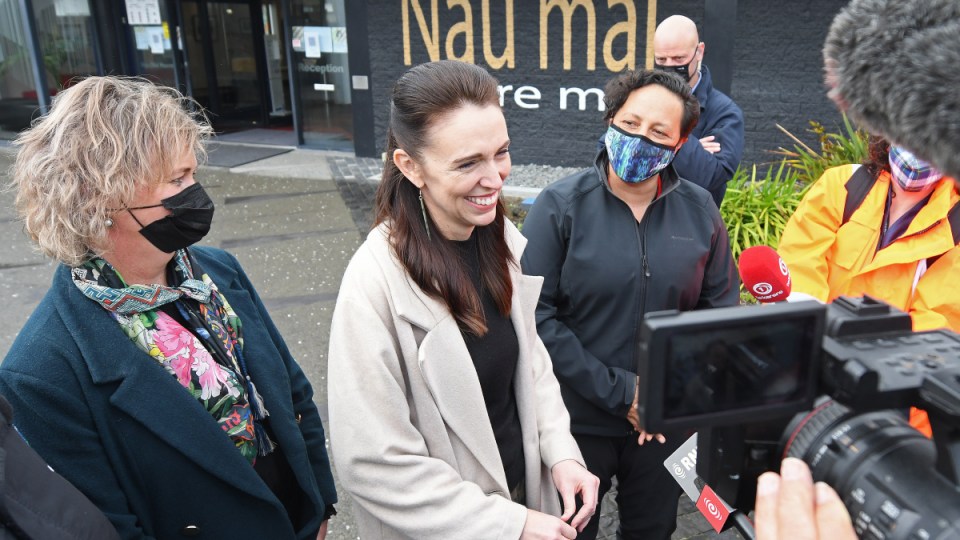 Jacinda Ardern on the vaccination trail in the regional city of Hastings at the weekend. Photo: Getty

The Prime Minister returned to work in Wellington on Monday after a four-day vaccination promotion trip to Rotorua, Hawkes Bay and the remote Tairawhiti region.

Back in the Beehive, she announced a raft of changes to New Zealand’s COVID-19 response, from lockdown arrangements to vaccine mandates.

Auckland, which has been in lockdown since August 18, will remain at level three until at least October 19.

Kiwis in lockdown in Northland and the Waikato might be in for an earlier exit.

There have been community cases in both regions in recent days, but their lockdowns will be reviewed on Wednesday for a possible exit on Friday.

Ms Ardern has also lengthened school holidays in Auckland, saying schools will not reopen on October 18.

In an effort to raise vaccine rates, the government has brought in compulsory jabs for health and disability workers, and for educational staff who have contact with children.

And on Monday morning, Ms Ardern revealed the government had made a purchase order with US pharmaceutical company Merck, Sharp & Dohme for 60,000 courses of the antiviral treatment molnupiravir.

“Antiviral medicines are an additional tool the government is adding to our toolbox to fight COVID-19,” Ms Ardern said.

“The most important thing people can do to prevent themselves, children and vulnerable people getting COVID is to get vaccinated.

“However it’s important we have medicines to help those who pick up the virus to avoid having to go to hospital.”

Known as ‘molnu’, molnupiravir is an oral-based treatment that MSD says helps stop the replication of the virus if used soon after infection.

Ms Ardern said New Zealand’s order of 60,000 treatments was not an expectation of a forthcoming Kiwi COVID-19 breakout.

Instead, it is a pro rata purchase in line with Australia’s order for 300,000 courses.

The US and several Asian nations have also pre-ordered the drug, with the US paying $US1.2 billion ($A1.6 billion) for 1.7 million courses of molnupiravir.

If New Zealand and Australia, which have not revealed the costs of their orders, are paying the same amount, it equates to $NZ1016 or $A966 per treatment.

NZ’s vaccination rate shot up in the weeks after the Delta outbreak was identified before a slump.

Encouragingly, rates are trending up again, including record numbers of Maori.

As of Monday, 79 per cent of eligible New Zealanders were at least partially vaccinated, and 55 per cent double-dosed.

Coverage is lower in many regions and among Maori.

Cases have steadily risen in the week since the government green-lit a relaxation of rules in locked-down Auckland.

After 60 cases on Sunday, modeller Shaun Hendy said it was possible daily infections could soon top 100 – which he said would make a case for restrictions being tightened once more.

“That’s something the government should be considering and it should be developing a plan for what happens … because that will put real strain on the health system in Auckland,” he told Radio NZ.

New Zealand, which has suffered 28 deaths through the pandemic, has never reported more than 89 cases in a day.

No end to Auckland lockdown as NZ reports 35 more cases