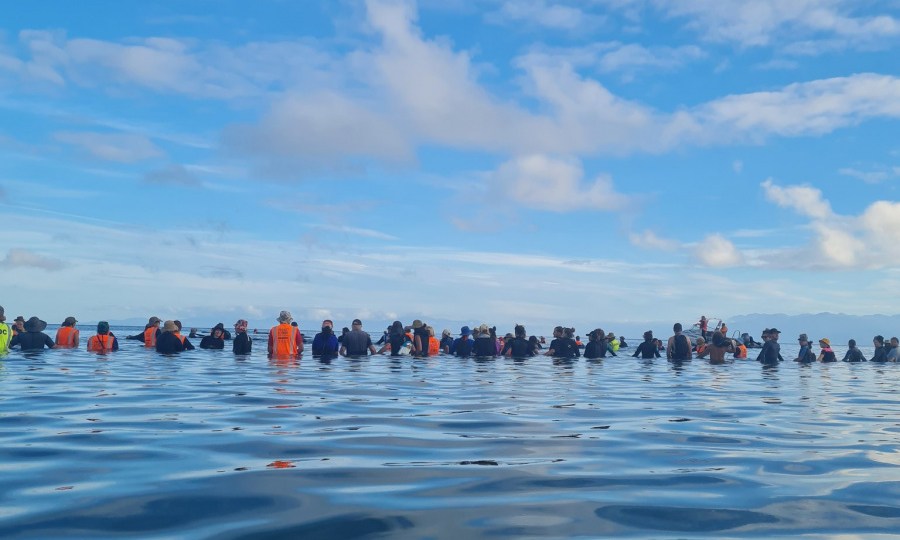 Volunteers spent hours in waist-deep water trying to save the whales. Photo: Twitter

More than a dozen pilot whales have died and many others remain stranded near a narrow sand spit at the northern tip of New Zealand’s South Island despite efforts to move them out to sea.

After a mass stranding at Farewell Spit on Monday, the whales were walked out at high tide that night, only to be found at the remote beach again on Tuesday morning.

Twenty-eight were alive, while 15 were known to have died.

Some of the stranded whales have started swimming away but others are milling around not far from shore, a Department of Conservation spokeswoman said in a statement.

“At this stage, it’s unclear whether the whales that are offshore from the Spit might re-strand in the outgoing tide or swim off. We should know in the next hour or so,” she said.

Rescue workers were in the water trying to encourage the whales to swim off.

About 50 people, including volunteers from Project Jonah, an environmental organisation that specialises in protecting marine mammals, researchers, government officials and the public were at the spot trying to help re-float the whales.

“Whales are looking fatigued and not showing huge drive to head to deeper water.”

Farewell Spit, a sliver of sand that arches like a hook into the Tasman Sea, has been the site of previous mass strandings.

Sometimes described as a whale trap, the spit’s long coastline and gently sloping beaches seem to make it difficult for whales to navigate away once they get close.

There are different theories as to why whales strand themselves, from chasing prey too far inshore to trying to protect a sick member of the group or escaping a predator.

Four years ago, more than 650 pilot whales beached themselves on Farewell Spit in two separate mass strandings. More than 350 died while about 300 were saved.

Desperate rescue effort to save dozens of stranded whales in NZ