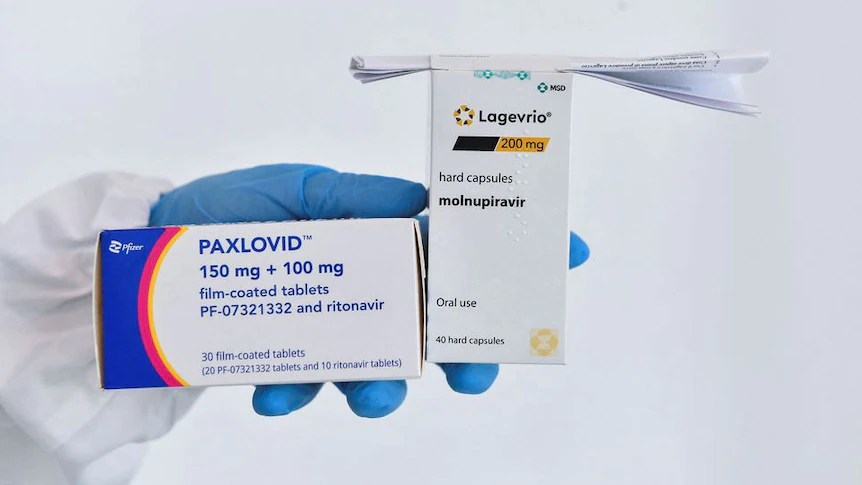 Two antiviral drugs are available to Australians, with the Pharmacy Guild seeking the right to dispense them without a doctor's prescription. Photo: Getty

About two weeks ago, news media began reporting that millions of Australians had become eligible for access to new antiviral drugs – COVID-19 treatments that are apparently effective in preventing severe disease.

The point of these drugs – nirmatrelvir–ritonavir (Paxlovid) and molnupiravir (Lagevrio) – is to catch a COVID-19 infection early and prevent it from becoming a killer case.

The federal government and many doctors hope these drugs will help take pressure off a beleaguered hospital system and bring down the death toll, which stands at about 1500 a month.

All of that sounds great. But, as goes with everything COVID, it’s complicated.

What do these drugs do?

The Therapeutic Goods Administration provisionally approved these drugs in January for the “treatment of adults with COVID-19 who do not require initiation of oxygen and who are at increased risk of progression to hospitalisation or death”.

The TGA advises that either medicine should be administered as soon as possible after diagnosis and within five days of the start of symptoms.

In both cases, the medicines are taken twice a day for five days.

Lagevrio works by inhibiting replication of the SARS-CoV-2 virus.

With Paxlovid, the nirmatrelvir component “blocks the activity of a protease enzyme that the coronavirus needs in order to replicate”.

The low-dose ritonavir component maintains plasma levels of nirmatrelvir for the duration of the treatment.

Which one works better?

Paxlovid is regarded as the more effective medicine.

According to an explainer at The Conversation:

“Evidence for the effectiveness of Paxlovid comes from a study that compared it with a placebo in 2246 unvaccinated adults who had mild to moderate COVID. They had risk factors for severe disease but didn’t need admission to hospital.

“The group that took Paxlovid had a reduced chance of being admitted to hospital, with a rate of eight per 1000 people. This compares with 63 per 1000 in the group that didn’t receive Paxlovid: a big reduction.”

The federal government has ordered a million doses of Paxlovid from the manufacturer, Pfizer.

It’s unclear whether there are a million doses in the country – but it would seem probably not.

In a statement on Friday, instead of giving a yes or no answer, a company spokesman said Pfizer was “pleased” to supply the doses “over the course of 2022, with the option to procure additional doses, if required”.

Additionally, the government has ordered 300,000 doses of Lagevrio.

So, most people are getting Paxlovid?

On Thursday, during the federal government’s weekly primary care webinar on COVID-19, it was disclosed that 116,000 oral treatments have now been prescribed since May:

The previous week, the number of oral treatments prescribed totalled 87,000.

Okay, but why so few doses of Paxlovid?

Because of problems that can occur when it’s taken with certain other drugs.

As reported in detail at News GP, the news arm of the Royal Australian College of General Practitioners, there are “a number of potential complex and serious drug–drug interactions that can result in severe or life-threatening side effects, or reduce the drugs’ effectiveness against COVID-19”.

News GP advised that there “are no known drug interactions identified with Lagevrio based on the limited data that is currently available. The most common side effects are diarrhoea, nausea and dizziness”.

Also, Lageviro is not recommended in pregnancy and breastfeeding.

According to the federal Department of Health, if you test positive for COVID-19, you may be eligible for antiviral treatments if you are:

Risk factors for these groups include:

People aged 18 years and older may be eligible:

For these people, conditions include:

As we reported in June, the rollout of antivirals was unwieldy and simply too slow.

The need to get more antivirals into more sick people is part of the reason why the PBS expanded the eligibility criteria.

Dr Chris Moy, an Adelaide GP and vice-president of the Australian Medical Association – and a participant in Thursday’s primary care webinar – has been working to identify and solve the rollout problems.

He previously outlined nine steps that people have to go through to obtain a prescription – keeping in mind that a newly sick person needs to start taking the antivirals within five days of first getting infected.

The Pharmaceutical Society of Australia (PSA) is keen to see GPs cut out of the process so that it can supply the drugs once a positive test is obtained and if eligibility is proven.

Cabinet is reportedly considering this move, which has been adopted in Scotland and Canada.

A spokesman for the PSA told The New Daily on Friday:

“Timely access is key – if patients cannot get into see their GP, we need alternative options so that they can get started on antivirals as soon as possible.”

GPs are resistant to this for two reasons. Firstly, they want to see more patients using the more effective Paxlovid – which requires a full understanding of what other drugs the patients is already using.

Second, as Dr Chris Moy queries: “What happens if something goes wrong? Will the patient’s doctor be held responsible?”

Still, there’s a sense that the rollout is improving.

What the PBS saves you

These drugs cost more than $1000 per course. But under the PBS scheme, eligible patients pay about $6.

The PBS and TGA make an important point though: Neither Paxlovid or Lagevrio are “intended to be used as a substitute for vaccination against COVID-19”.

Vaccinations remain the best way “to protect yourself, your loved ones and the wider community”.

If you’re a relatively healthy person, with no pre-existing conditions that would leave you vulnerable to serious side effects, get a booster shot.

Booster uptake is still lagging despite government efforts to remedy the situation.

COVID-19 antivirals: Millions are now eligible, but the drugs are no substitute for boosters