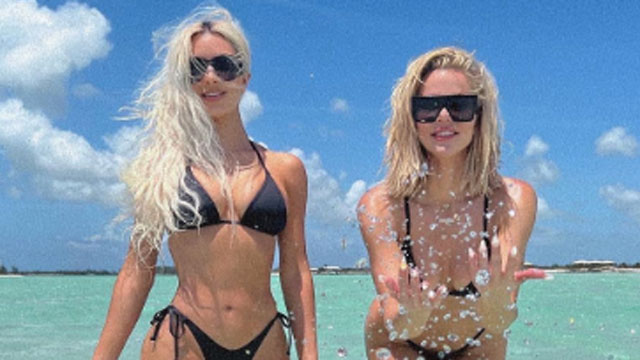 So there I was, absorbed in a rudderless Instagram scroll, when an unsolicited image of Kim Kardashian popped onto my screen.

Kim and her sister, Khloe Kardashian, were standing in matching black bikinis in turquoise waters above a caption titled ‘Khloe’s b’day trip’.

I zoomed in on Kim Kardashian’s stomach, mystified by how her waist could be so minuscule, and seemingly out of proportion to the rest of her body. Her measurements are the real-life embodiment of the 1950’s Cinderella cartoon.

(Cinderella’s body had sewn the link between slimness and success when I was young. In my late twenties, Kim Kardashian was doing the same.)

I placed my hand below my ribcage and felt my stomach. Sadness washed over me as I remembered how my stomach had felt before I was diagnosed with severe ulcerative colitis, which culminated in a four-month hospital admission in 2018.

The devastating effect of the disease, compounded by the medications used to treat it, has inevitably shifted my body composition. Frequent immunotherapy can slow down one’s metabolism, coupled by the weight-inducing side effects of steroids, such as prednisone. I now weigh five to seven kilos more than before my diagnosis and have experienced a decrease in muscle tone.

The gratitude at avoiding the surgical removal of my colon and pancreas is usually powerful enough to drown out body image insecurities. But last Sunday, as I glared at Kim Kardashian’s body, I succumbed to feelings of inadequacy, anxiety and eventual resentment.

Why was I falling for this trick? It is no secret that the Kardashians edit their photos.

In January, Kim posted to Instagram another beach shot from her Skims Swim collection photoshoot. Fans were quick to notice the gaping absence of flesh behind her right knee.

The mogul quickly deleted the image after a large proportion of comments pointed out the warped body part. Unfortunately for millions of women, not all Kardashian photoshopping is as transparent as the Skims Swim image.

The candid quality of Instagram, as opposed to the glossy, edited magazine images where one expects photoshopping, deceives women into feeling guilty for not living up to these cultivated beauty ideals.

The negative impact photoshopped images on Instagram have on female body image was explored in the 2019 Florida State University study, Posting edited photos of the self: Increasing eating disorder risk or harmless behaviour?

The results revealed an increase in body dissatisfaction, depression and anxiety among the 80 participants who were editing their photos, in comparison to the controlled group. The negative mental health symptoms stemmed from the women’s belief that they had to change their appearance to embody a societal ideal, generating a negative obsession towards their own body.

This month, in an Allure magazine cover story, she was asked if she feels “responsible” or “guilty” for setting an unattainable beauty standard. Her response? “If I’m doing it, it’s attainable.”

Cue a drawn-out eye roll. The average woman does not have the time or resources a Kardashian has to put into perfecting their appearance; and the beauty standards she promotes are unrealistic. Just look at her ‘edited’ photos – they’re the very definition of unrealistic.

Kim Kardashian’s photos trigger insecurity in able-bodied women who feel disappointment they cannot replicate what is not real. For the disabled female community, including myself, they heighten the anxiety of being unable to achieve normal beauty standards, let alone digitally contoured beauty standards.

On Monday morning I decided to delete my Instagram. My gut has been through enough in the last few years; it does not need a wave of Kardashian-induced insecurity swimming through it.

Kim Kardashian and an unrealistic body image: Why I quit Instagram