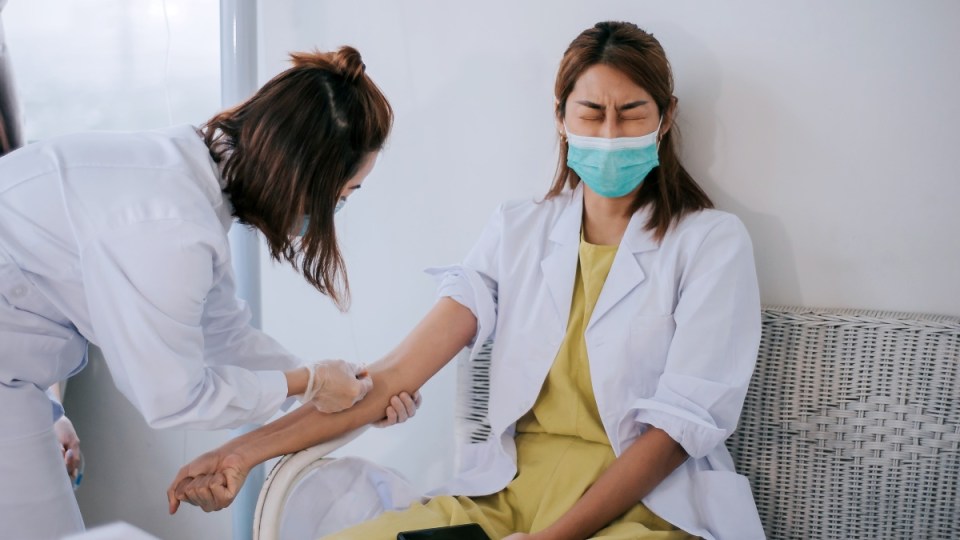 A new blood test could save 100,000 people globally from the rigours of chemotherapy. Photo: Getty

When reporting good news in cancer research, there’s usually a caveat that the promising breakthrough needs another five to ten years of trials to progress to a clinical setting.

A blood test that identifies which Stage II colon cancer patients require chemotherapy and which don’t will become available later this year.

And that’s just the beginning.

The researchers, from the Walter and Eliza Hall Institute (WEHI) in Melbourne, and the Johns Hopkins Kimmel Cancer Centre in the US, are already conducting three new randomised studies that will determine the blood test’s efficacy in colorectal and pancreatic cancer patients.

Future trials are planned for patients in other stages of colon cancer and patients with ovarian cancer.

What is stage II colon cancer?

Stage II colon cancer is defined “as a cancer that has grown through the wall of the colon, but does not extend to the lymph nodes or other organs”.

Nearly 4000 Australians are diagnosed with it each year.

According to WEHI, “most patients with stage II colon cancer are cured after surgery to remove the cancer from the bowel, the cancer will recur in around 20 per cent of patients”.

Standard practice is to offer chemotherapy to all stage II colon cancer patients, “despite a majority not needing it”.

The blood test changes all that.

The researchers say “it could spare thousands of colon cancer patients from unnecessary chemotherapy”.

The test also has the potential to accelerate the development of promising new treatment options.

What is the test?

The purpose of giving a patient chemotherapy, following colon cancer surgery, is to kill off tiny cancer cells that have travelled from the bowel through the bloodstream to infect another organ, such as the liver.

Initially, these cancer cells, known as micrometastases, are too small to be identified by scans in the early stages of the tumour.

Eventually these “invisible” cancer cells will grow large enough to be identified in a CT scan. But your doctor doesn’t want it to get that far.

Hence, the patient undergoes chemotherapy just in case these micrometastases are in play.

As these cells circulate, they release what’s known as circulating tumour DNA (ctDNA) into the bloodstream – genetic material shed from tumours.

The novel blood test works by detecting ctDNA – which in turn indicates the cancer is spreading – enabling researchers (and eventually oncologists) to identify which patients should be offered chemotherapy.

The researchers found that when a patient’s blood test does not reveal ctDNA after colon surgery, “the likelihood of micrometastases is very low and chemotherapy can be avoided as there are no tumour fragments left to kill”.

Associate Professor Jeanne Tie, a clinician scientist at WEHI and a medical oncologist at the Peter MacCallum Cancer Centre, said:

“Our trial has conclusively shown how the ctDNA blood test can be used to direct post-surgical therapy in stage II colon cancer and substantially reduce the number of patients treated with chemotherapy, without impacting the risk of cancer relapse.”

She said the ctDNA blood test could be used to spare about 600 Australians and more than 100,000 people worldwide “from unnecessary chemo treatments each year”.

More than 450 patients and over 20 hospitals across Australia were involved in the world-first clinical trial, which began in 2015.

The research is published in The New England Journal of Medicine.