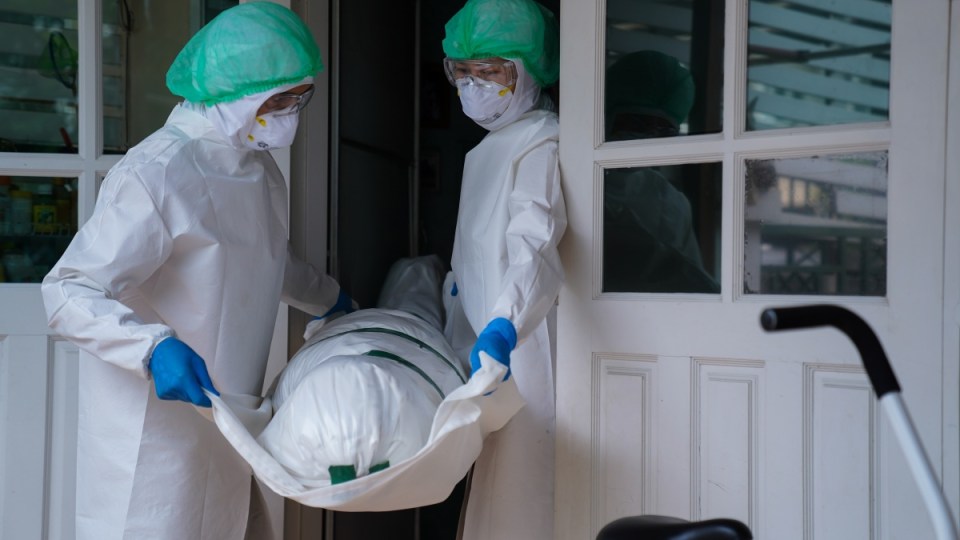 Australians seem to think COVID-19 is all wrapped up as an issue. It's not. Photo: Getty

It’s just shy of a month since Scott Morrison announced the election.

Since then, as of Friday, 907 people have died from COVID-19, way more than 10 per cent of all deaths since the pandemic began. That’s a lot of heartache.

You could fill a couple of Boeing 747s with that many people. Politicians would be lining up to join a national prayer meeting if those planes went down in quick succession.

But the high COVID death rate, and the very high case numbers, are not getting a mention, particularly in the election coverage.

In the week leading up to Mr Morrison’s announcement there was an average of 54,337 new cases reported each day.

As of Friday, that daily average had dropped to about 41,000. Still very high.

Do you remember when the suggestion we might see a thousand cases a day was terrifying? Certainly, a couple of years ago we seemed to feel a little frightened every time half a dozen grandmothers passed away.

Now, aside from people directly affected by a COVID death, the issue, certainly at a political level, has seemingly become ho-hum.

Could the real numbers be higher?

Professor Adrian Esterman, Chair of Biostatistics and Epidemiology at the University of South Australia, told The New Daily that there’s evidence, as reported by the World Health Organisation, that the true death rate is three times higher than what’s being reported.

He said this was because there are people who get sick at home and die at home and they don’t get picked up in the statistics.

“There’ll be a lot of people who never report that they’re sick and they end up dying and don’t get reported as dying from COVID-19,” he said.

“Those deaths are the tip of the iceberg.”

Since the beginning of the pandemic, at least 7453 Australians have died from COVID-19, and most of them died this year.

Regarding the high number of reported deaths, Professor Esterman said: “Nobody seems to care about it or worry about it apart from the families involved.”

He said it was “partly the fault of governments, but really, the vast majority of Australians are sick of COVID. They want it to be over and I can completely understand that. The problem is, it isn’t over”.

Professor Esterman noted that since the beginning of this year, “there have been more deaths than the previous two years combined – it’s now our second-biggest cause of death”.

Meanwhile, governments have largely abandoned high-profile public messaging and advice. Public health officers advocating the wearing of masks in crowded spaces are simply not being heard.

“The message from different state governments and territories is it’s up to you to work out what your risk is and protect yourself,” said Professor Esterman.

What do these numbers mean?

Case numbers appear to be coming down nationally, whereas the average number of deaths has moved upward.

Professor Bennett said: “When you look at the deaths data, there is a delay. People often survive the initial infection. It can take them a week or two to get really unwell and pass away.

“So we’re still seeing the deaths associated with the peak in case numbers.”

There’s also the likelihood that case numbers are being undercounted because “we’re probably not fastidious in getting tested”.

Plus, there’s the grim reality that the more cases of COVID-19 will lead to a higher number of deaths.

But compared with where we were in October last year, before vaccination took off, the proportion of people dying from COVID-19 is much lower.

Still, the raw numbers add up

Professor Nikolai Petrovsky is a professor of medicine at Flinders University involved in vaccine research.

He said that people were sold the idea that the vaccines would prevent them from infecting their older and vulnerable relatives.

“I think this surprised people because they were told the vaccines would stop all that,” he said.

“We’re seeing a high level of community transmission despite high rates of vaccination.”

In other words, more people need to be aware that they might pose a risk to their vulnerable relatives.

The new kind of flu, get used to it

In a few days it will have been a month since the election was called. The number of COVID deaths will by then exceed one thousand. How do we get our heads around that?

Professor Petrovsky said that in a bad flu season, a similar number of deaths “wouldn’t be necessarily surprising”.

He said by far the deaths will be those of “very frail people”.

COVID-19 or a bad flu will have “accelerated what was going to occur already”. He said this reality “is what they call learning to live with the virus. The virus is here to stay”.

He added: “We need to do our best to minimise this impact, just like we do with the flu. But we don’t stop flu deaths with the elderly until we find some miraculous solution. Which we haven’t done with the flu. It’s a work in progress.”

Will the electorate care?

“COVID management isn’t an issue for the electorate,” he said. “They’ve moved on.”

Cost-of-living issues have their attention.

Dr Williams said he was actually surprised that Scott Morrison isn’t trumpeting his COVID-19 response. He believes that most people think he did a good job overall.

Whether that’s true or not, if the electorate no longer cares about a pandemic that still rages, why should he?

COVID’s death toll has soared since the election was called, but nobody is talking about it