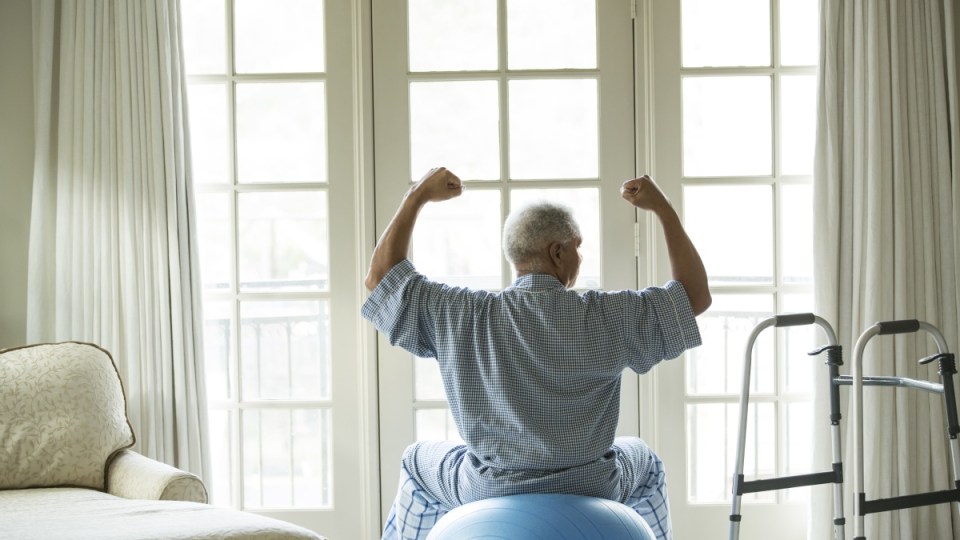 Our cancer risk markedly increases with age. Exercise is one of three interventions that make a difference. Photo: Getty

As we age, the risk of getting most cancers markedly increases. It’s the way it goes as our defences against genetic mutations decline. The risk is even greater for people who aren’t physically active and have a poor diet.

Public health strategies are limited to screening programs and messages such as “don’t smoke”.

Are there potentially other affordable public health intervention strategies that might significantly reduce our cancer risk?

A new study led by Professor Heike Bischoff-Ferrari, a researcher specialising in geriatric health at the University Hospital Zurich Clinic, suggests there is.

The researchers found that a combination of high-dose vitamin D, omega-3s, and a simple home strength exercise program showed a cumulative reduction by 61 per cent in cancer risk in healthy adults aged 70 or older.

These findings aren’t completely out of the blue.

Multiple studies have shown that vitamin D inhibits the growth of cancer cells. A 2020 randomised clinical trial study found that vitamin D “reduced the incidence of advanced (metastatic or fatal) cancer … with the strongest risk reduction seen in individuals with normal weight”.

Omega-3 has been found to inhibit the transformation of normal cells into cancer cells, and to kill cancer cells.

As The New Daily has previously reported, exercise has been shown to improve immune function and decrease inflammation, which is thought to help in the prevention of cancer.

Professor Bischoff-Ferrari’s study put these interventions to the test, singly and in combination, in how they impacted the risk of invasive cancer among adults aged 70 or older.

The researchers set up what is known as the DO-HEALTH trial – a three-year trial in five European countries (Switzerland, France, Germany, Austria, and Portugal) with 2157 participants.

The participants were randomised into eight different groups to test the individual and combined benefit of the interventions.

Group one received 2000 IU per day of Vitamin D3, more than twice  the common recommendations for older adults, which is 800 IU per day. This group also took a daily one gram dose of omega-3s, and three times a week performed a set of simple strengthening exercises.

There was a control group that received a placebo. The other groups received either two or just one of the interventions.

The participants received check-up phone calls every three months and had standardised examinations of health and function at baseline, and annually for three years.

The results show that all three treatments “had cumulative benefits on the risk of invasive cancers”.

Each of the treatments had a small individual benefit but when all three treatments were combined, the benefits became statistically significant, and the researchers saw an overall reduction in cancer risk by 61 per cent.

The results need to be replicated before public health policy adopts the findings. But they’re pretty simple interventions. Having people commit to vitamin D and omega-3s is the easy part. Getting them to adopt a regular exercise routine is not so easy.