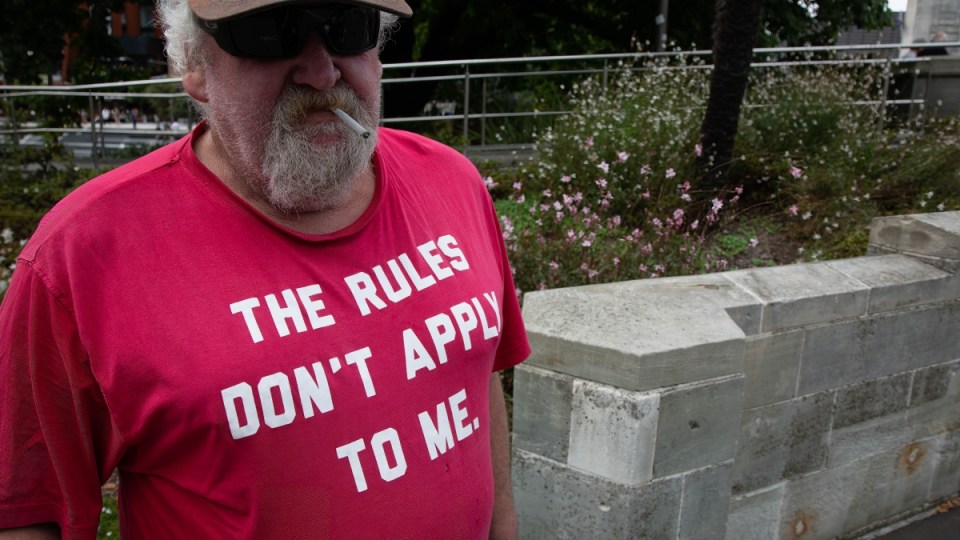 The study looked at New Zealand anti-vaxxers, such as this guy. Photo: Getty

Virologists and epidemiologists have taken centre stage during the COVID-19 pandemic.

These were the scientists charged with explaining what kind of virus we were dealing with (one that still throws up surprises is the short version) and how it would spread through the population.

As a research exercise, the pandemic has been endlessly fascinating.

But psychologists, too, have been intrigued by how people have responded to news of the virus, and to the attempts by public health officials to promote preventative measures.

“We had so many friends and family who initially said that the pandemic was a hoax, and then refused to wear a mask or social-distance, and kept singing in the choir and attending events,” said Terrie Moffitt, a professor of psychology and neuroscience at Duke University, in North Carolina.

“And then when the vaccines came along, they said ‘over their dead bodies’, they would certainly not get them.”

Dr Moffitt, speaking in a media release, appears to have been personally affected by the anti-vaccination movement.

Professionally, she was inspired.

“These beliefs seem to be very passionate and deeply held, and close to the bone. So we wanted to know where they came from,” she said.

Where else to look but childhood?

Instead of investigating her own backyard, Dr Moffitt and her colleagues focused on the university city of Dunedin in New Zealand.

Dunedin contains a higher-than-average number of young people, many of them well educated. The southern part of the city, meanwhile, is recognised as the poorest area on the Otago Peninsula.

What made Dunedin useful, though, was a database – the Dunedin Multidisciplinary Health and Development Study – which has been tracking all of the nearly 1000 people born there in 1972 and 1973.

Since childhood, the researchers “have measured multiple social, psychological and health factors in each of the participants’ lives, resulting in a steady stream of research publications offering deep insights into how childhood and its environment forms the adult”.

Dr Moffitt ran a special survey of participants in the middle of 2021 “to gauge vaccination intentions shortly before the vaccines became available in New Zealand”.

Then they matched each individual’s responses to what they know about that person’s upbringing and personality style.

Many of the participants who said they were vaccine-resistant or hesitant were found to have had troubling childhood experiences, including abuse, neglect, threats and deprivations.

“That suggests to us that they learned from a tender age ‘don’t trust the grownups’,” Dr Moffitt said.

“If anyone comes on to you with authority, they’re just trying to get something, and they don’t care about you, they’ll take advantage.”

Dr Moffitt said developing such a defensive and cynical worldview at an early age “leaves you with a sort of a legacy of mistrust”.

She said these lessons were so deep-seated “that it automatically brings up extreme emotions”.

According to the study paper, this mistrust “was widespread, extending not only to institutions and influencers, but also to family, friends and co-workers”.

“If your trust is abused as a child, later on, four decades later, you still don’t trust,” she said.

“That’s not trivial. I’m not going to get around that with a cool campaign or a celebrity endorser.”

At ages 13 and 15, the vaccine-resistant group had “tended to believe that their health was a matter of external factors beyond their control”.

At age 18, these teens “were more likely to shut down under stress, more alienated, more aggressive”.

This may explain, at least in part, why anti-vaxxers tend to “value personal freedom over social norms, and being nonconformist”.

How to fix this situation?

Do a better job protecting the children who are being born now.

Anti-vaxxer? You probably suffered trust issues as a child