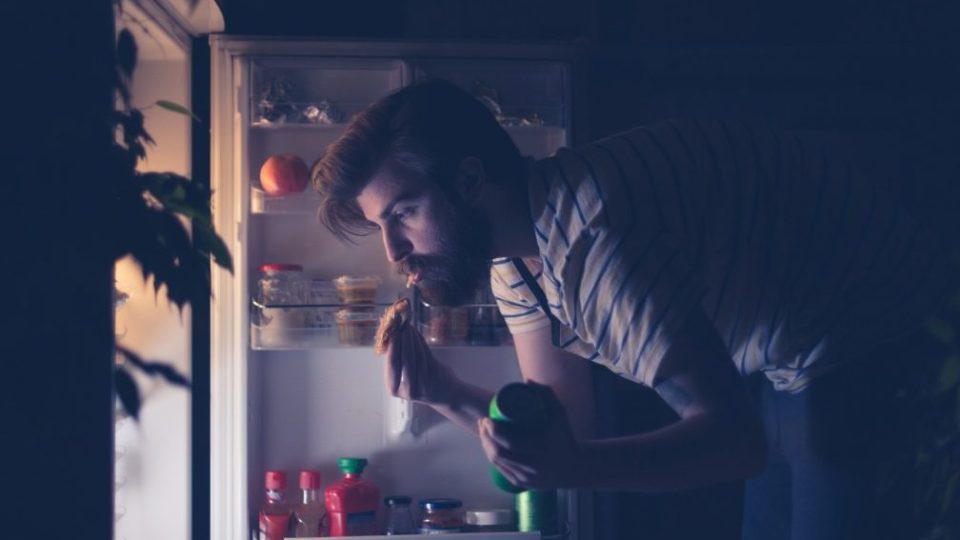 Cravings for food at bedtime may be a signal that you're not getting enough sleep. Photo: Getty

Here’s how to grow a belly in just two weeks: Sleep for four hours a night and have free access to a larder full of food.

You’ll find yourself eating an extra 300 calories per day. This includes eating about 13 per cent more protein, and 17 per cent more fat.

At the end of the two weeks, congratulations – you’ve increased your total abdominal fat area (let’s just call it the belly) by nine per cent.

You’ve also managed an 11 per cent increase in abdominal visceral fat, the unhealthy fat that accumulates around your organs.

These were the results of a tight, controlled experiment from the Mayo Clinic, and they could serve as a rough guide, in real numbers, as to what you’re doing to your body with regular poor sleep.

Keep this in mind: The study involved healthy, young and “relatively lean” participants.

Previous research has found that the link between lack of sleep and weight gain and obesity is stronger in children and adolescents.

This suggests that if the Mayo experiment had used child participants, those increases in food intake (number of calories) and fat accumulation could be higher.

Are we sleeping less?

Over the past 40 years, obesity rates have blown out to epidemic levels, hand in hand with type 2 diabetes and heart disease.

During that time, ‘low-fat’ products came into vogue, with the public believing them to be healthy alternatives, when in fact they were laden with sugar, which served to trigger hunger in the brain.

There has also been a drop in physical activity, and some research suggests that people are sleeping less.

Taken together, these trends have contributed to the western world piling on the kilos.

But the extent to which poor sleep is contributing to the obesity crisis isn’t clear.

Some researchers have found evidence that challenged the notion of a modern epidemic of insufficient sleep.

People don’t know how much sleep they’re getting

How well or poorly the population is sleeping can’t easily be established.

Evidence from surveys can’t be trusted, in part because people have a poor understanding of how much sleep they’re actually getting.

A 2006 study from the University of Chicago Medical Centre found that participants spent an average of 7.5 hours a night in bed, but they spent only 6.1 hours asleep.

White women slept the most, 6.7 hours a night, followed by white men at 6.1 hours, Black women at 5.9 hours and Black men at 5.1 hours. Rich people slept better than poor people.

Nevertheless, there’s good evidence that sleeping for too short a time each night (or sleeping too long) is associated with gaining weight, and that poor sleep is indeed playing a role in society’s obesity problem.

Why does poor sleep lead to weight gain?

In sleep restriction experiments, signals from the brain that control appetite regulation have been found to go out of whack.

Specifically, inadequate sleep increases secretion of the signal hormone ghrelin, which controls appetite, and a decrease in leptin, which tells the brain the body is satiated.

Hence, the body takes in more food than it needs, and gets stored as fat.

Not just fat, but nasty fat

One of the key findings from the Mayo study is that the fat accumulated during sleep deprivation is visceral fat, which is somewhat stealthy in the way it settles between and around our organs.

Dr Virend Somers is the Alice Sheets Marriott Professor of Cardiovascular Medicine, and principal investigator of the study.

He said that “normally” fat is preferentially deposited subcutaneously or under the skin. This is the case when we eat too much but we’re otherwise healthy, and maintaining a good sleep routine.

The scary part? Once the experiment was over, and the participants, recovering under supervision, had returned to sleeping nine hours a night (instead of four) the visceral fat continued to accumulate.

“During recovery sleep there was a decrease in calorie intake and weight (but) visceral fat continued to increase,” Dr Somers said.

He said this suggests “that inadequate sleep is a previously unrecognised trigger for visceral fat deposition, and that catch-up sleep, at least in the short term, does not reverse the visceral fat accumulation”.

More about the study

The study group consisted of 12 healthy people who were not obese, each spending two 21-day sessions in the inpatient setting.

When the three-week first session was completed, the participants took a three-month break to recover from the effects of the experiment. This is called the washout period.

For the next 21-day session, the groups swapped over: those in the control group were now in the experimental group and vice versa.

Each group had access to free choice of food throughout the study.

The first four days were an acclimatisation period.

During this time, all participants were allowed nine hours in bed to sleep.

For the following two weeks, the restricted sleep group was allowed four hours of sleep and the control group maintained its nine hours.

This was followed by three days and nights of recovery with nine hours in bed for both groups.

Dr Somers says that more study is needed to determine “how these findings in healthy young people relate to people at higher risk, such as those who are already obese, or have metabolic syndrome or diabetes”.

How to pile on the belly fat: Sleep four hours or less a night