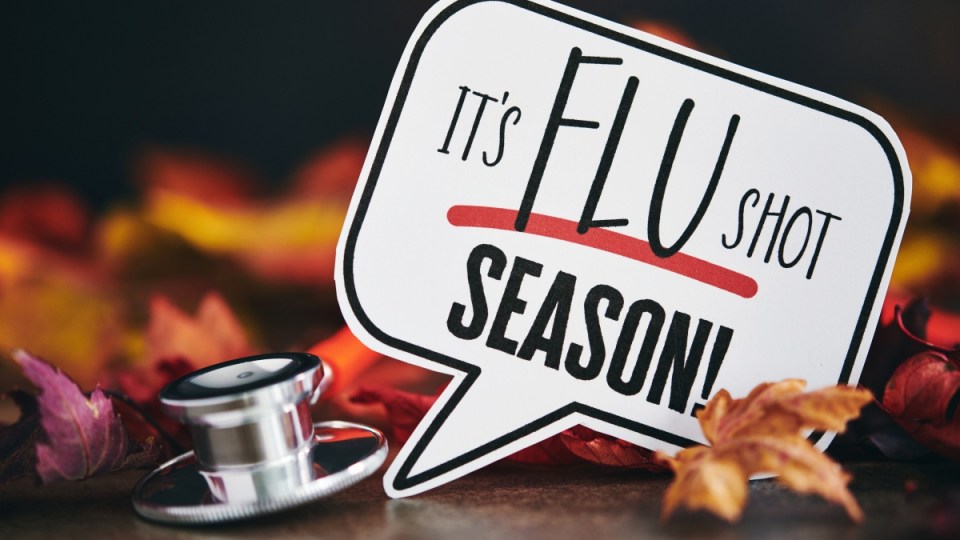 Keep an eye out for when vaccines come available. Photo: Getty

COVID-19 is still running hot. And as the graphs show, it’s coming in almost perfect waves.

And what about flu season? We haven’t had one for a couple of years. Not one person died from influenza in 2021.

Why? We had mandatory masking and lockdowns, with limited exposure to people outside of our families. But those measures are gone.

So what kind of flu season will it be? And what can we do about it?

On March 10, NSW Health Minister Brad Hazzard reportedly said that he was preparing for COVID cases to double in mid- to late- April, as the weather continued to cool.

The trend toward that figure seems in play.

Experts say that other states will follow the same trajectory.

In other words, we can expect a surge through autumn, possibly into winter.

“And we’re starting to see, perhaps, the early signs that it’s coming right now,” he told the ABC.

Back in December, the Royal Australian College of General Practitioners (RACGP) published an article in which a distinguished expert predicted that COVID cases would remain “relatively low over summer”, with the next big wave coming in winter.

In January, cases spiked at 50,000 in a day. This was driven by the Omicron BA.1 variant, which was found to be more transmissible but less deadly than the Delta variant.

At that time, when Omicron was emerging as the most prevalent variant in Australia, The New Daily reported on a sub-variant of Omicron known as BA.2.

It’s proved to be even more transmissible than BA.1, by up to 40 per cent according to estimates.

The BA.2 variant is driving the autumnal surge

Two weeks ago, James Wood, an associate professor at UNSW’s School of Population, told the ABC that BA.2 probably accounted for more than 50 per cent of cases in NSW.

By the end of the month, where we are now, he predicted it would be closer to 90 per cent.

While more people will get sick, most won’t suffer serious illness. BA.2 doesn’t appear to be deadlier than the BA.1 Omicron variant.

But, as Professor Nancy Baxter, head of the University of Melbourne’s School of Population and Global Health, told the Xinhua news agency:

“Although we don’t have any indication that the BA.2 is more severe than BA.1, the more people that get it, the more the chance we’re going to have severe cases.”

What about flu season?

There’s been a lot of talk about flu season in 2020 being a bad one, a prediction based on dodgy logic: Because we haven’t had a flu season for two years, then when it comes, it’s bound to be deadly.

However, there are good reasons to think that flu will get into the country.

Professor Ian Barr is the deputy director of the World Health Organisation Collaborating Centre for Reference and Research on Influenza at the Doherty Institute. In an article published by the RACGP, he said:

“With increased travel and more porous borders, and lack of quarantine, and no testing for influenza at border sites, then it’s inevitable it’ll get back in this year.”

Professor Barr’s “instinct” was that cases were “likely to remain low”. But he noted that any prediction would be “crystal-balling”.

The federal government is preparing for the worst.

As The New Daily reported on Wednesday, the government says it “will spend $6 billion on a winter response plan, with a combined COVID-19 and influenza spike in infections predicted in coming months”.

A further $1 billion will be spent on extending the COVID-19 vaccine rollout, “as people prepare to receive second booster doses, while $546 million will go towards extending the Medicare Benefits Schedule for pathology items used for COVID testing”.

Complacency is the biggest danger

There are concerns that people are suffering vaccine fatigue. Having been jabbed up to three times so far for COVID-19, Australians may skip the flu vaccine because … well, they’ve had enough of needles.

To some extent, that’s probably true. But it’s not very bright or responsible. Flu is a serious killer of small children and old people. Get the jab.

As the Omicron wave saw, for the first time, many thousands of new cases a day, the message from government was that you, the everyday Australian, were now responsible for protecting yourself.

This meant that most of the contentious mandates were lifted and, outside of public transport and hospitals, most people felt liberated from masks. Go to any supermarket and see how many masks are being worn by customers. Very few at all.

This has certainly played a role in the high number of infections.

As Professor Baxter from the University of Melbourne tells it:

“I know that masks are unpopular amongst our politicians, and I can understand that. It’s kind of a constant reminder of the pandemic.

“But masks are effective against any variant. They’re not variant specific. So indoors, encouraging mask wearing is very important, and the highest quality mask that’s available; so N95, P2 masks are definitely what I’d recommend.”

And here’s a thought: masks are also protective against flu.

How you weather this unpredictable winter is largely up to you.

Winter is coming, COVID-19 cases are rising: What you need to know