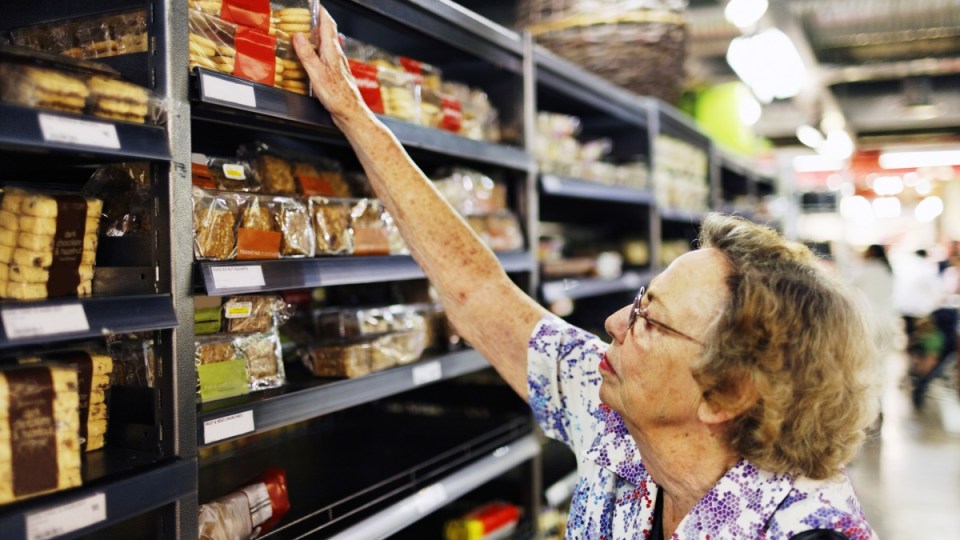 Is that a healthier biscuit or just the one she likes? Photo: Getty

How can we turn a nation’s unhealthy diet around?

As it goes for Australians, people in the UK eat way too many foods high in sugars, salt and saturated fats.

Despite high-profile attempts to encourage Brits to swap hot chips for salads (think of celebrities such as Jamie Oliver trying his heart out) the preference for the sorts of foods that give you type 2 diabetes and heart attacks remains intact.

The UK government is hoping that new legislation which restricts the promotion of these foods in prominent locations in supermarkets might help wean its citizens off chips and sweets and turn them on to eating more fruit and vegetables.

In other words, the UK is hoping that changing the layout and signage in supermarkets will impact the buying habits of the public.

Will these laws work?

The short version: Up to a point.

Oxford scientists tested the government’s plan by trialling a number of interventions in grocery stories with mixed results.

One study tested how the availability, positioning, promotions, and signage of healthier food options might influence purchasing behaviour within major UK supermarkets.

For example, stocking low-fat chips next to regular chips was associated with a 23 per cent drop in sales of the fattier version.

Increasing availability of “lower energy” (fewer calories) biscuits led to an 18 per cent lift in their sales. The sales of regular biscuits, with higher calories, dropped by four per cent.

This suggests that stocking shelves with more healthy versions of a food leads to more consumers taking up these healthier options. But that wasn’t always the case.

In a second study, carried out in the seven weeks leading up to Easter,  supermarkets effectively hid Easter eggs and other “seasonal candy” in the regular confectionery aisles instead of promoting them prominently.

The results of this trial were promising.

In this study, 34 ‘intervention stores’ in two London boroughs, removed their free-standing promotional displays of Easter treats. Easter egg sales were compared with those at 151 control stores, where the promotional displays stood prominently at the end of aisles and near checkouts.

It was expected that both intervention and control stores would see an increase in sale of Easter eggs.

In the control stores, sales increased by 18 per cent. In the intervention stores, there was only a five per cent increase.

The authors reported: “The absolute difference in confectionery sales between control and intervention stores was approximately 21 kilograms per store per week.”

This amounts to nearly 5000kg of chocolate and lollies left on the shelf over the seven-week period.

The researchers are encouraged

She and her colleagues believe the new papers – see here and here  – offer new evidence on how legislation can help shape consumers’ diets with the goal of improving health.

Dr Piernas said: “These results from a ‘real world’ intervention provide promising evidence that the proposed legislation in England to restrict promotions of less healthy items in prominent locations may help reduce over-consumption.”

In some cases, maybe

One of the big challenges is getting people to eat more fruit and vegetables, and more fibre in packaged foods such as cereals. The studies were less successful in this regard.

The interventions may have a limited shelf life. As the authors note:

“We reported that some choice architecture interventions implemented within stores, such as availability and promotions, were associated with short-term changes in food purchasing behaviours.

“However, the effect of promotions on consumer behaviour may diminish with time and are less likely to be sustainable for retailers over longer time periods.”

Supermarkets hide their Easter eggs for the sake of customers’ waistlines