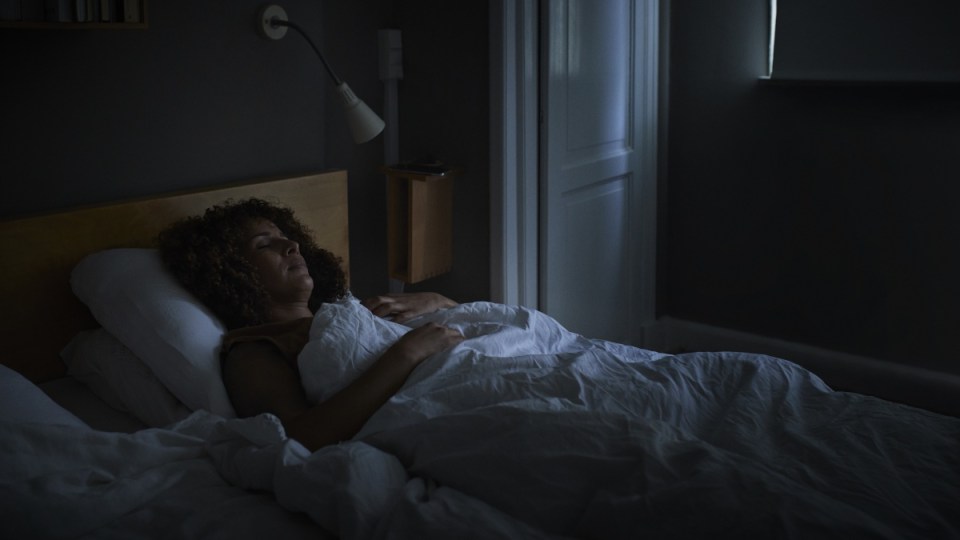 Keeping the TV on at night has long been associated with obesity. A new study tries to explain why. Photo: Getty

In 2019, researchers found that women who slept with a television or light on were more likely to gain weight and develop obesity.

The findings suggested “turning off lights at bedtime could reduce the risk of becoming obese”.

Overall, the study, from the US government’s National Institute’s of Health, and based on data from more than 43,000 women aged 35-74, concluded: the brighter the light, the fatter you get.

Further, the researchers found that “women who slept with a light or television on were more likely to be obese at the start of the study”.

They were also 17 per cent more likely to have gained around five kilograms or more over the follow-up period of about five years.

The association with light coming from outside the room “was more modest”.

Using a small nightlight “wasn’t associated with any more weight gain than sleeping with no light”.

The reasoning in this observational was suggestive and short on detail:

The authors couldn’t rule out all the other factors that might be linked with artificial light at night and weight gain. Namely, if you leave your light on, you’re going to wake up frequently, feel a bit out of sorts, and head to the refrigerator for a comforting snack.

Previous studies, going back some years, had found this association between keeping the lights on and stacking on the kilos.

A new study throws some light on why this is so. Maybe.

Researchers at Northwestern University put two groups of 10 young, healthy adults into differently lit rooms for a couple of nights.

The first night both groups slept with dim light.

The volunteers wore heart monitors and were given glucose tests. Following the first night, both groups had normal glucose levels, and healthy heart rate variability.

After the second night, the experimental group had impaired glucose and cardiovascular regulation.

“The results from this study demonstrate that just a single night of exposure to moderate room lighting during sleep can impair glucose and cardiovascular regulation, which are risk factors for heart disease, diabetes and metabolic syndrome.

“It’s important for people to avoid or minimise the amount of light exposure during sleep.”

Dr Zee said there is “already evidence that light exposure during daytime increases heart rate via activation of the sympathetic nervous system, which kicks your heart into high gear and heightens alertness to meet the challenges of the day”.

She said the study results indicated “that a similar effect is also present when exposure to light occurs during night-time sleep”.

Insulin resistance is when cells in your muscles, fat and liver don’t respond well to insulin and can’t use glucose from your blood for energy.

The pancreas responds by making more insulin. But over time, this impairs the pancreas’ insulin-making abilities, your blood sugar goes up, you start feeling fatigued, thirsty and you urinate a dozen times a night.

In other words, you develop type 2 diabetes.

Dr Zee said this might explain the 2019 study where healthy women over time, sleeping with the lights or television on, became obese.

“Now we are showing a mechanism that might be fundamental to explain why this happens,” Dr Zee said.

“We show it’s affecting your ability to regulate glucose.”

And keep the curtains drawn.

Lights out! For the sake of your heart, turn to the dark side