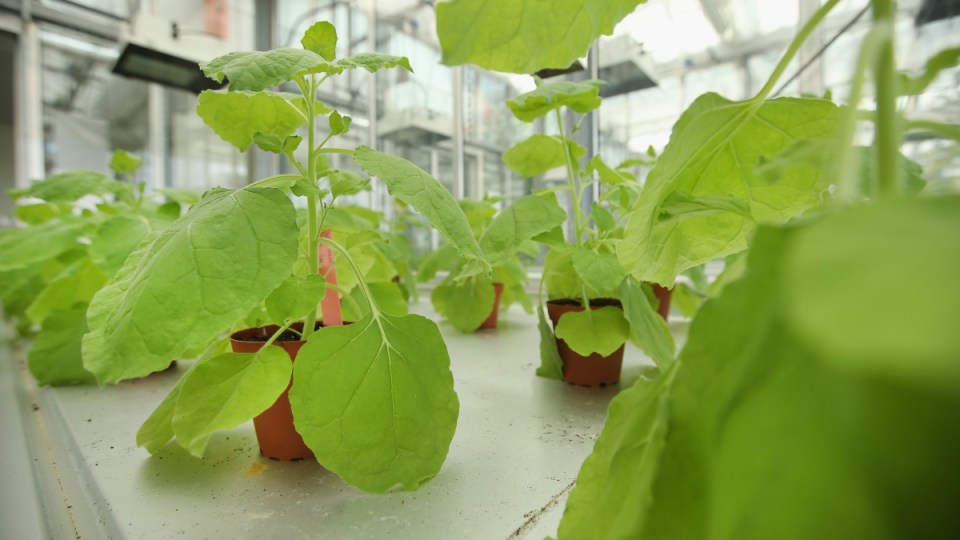 When the botanist Joseph Banks was sailing with Captain James Cook along the coast of Australia in 1770, he noticed Indigenous people chewing the dried leaves of a plant.

“… the leaves of an herb which they chewd (sic) as a European does tobacca (sic),” he wrote.

This plant was indeed a native tobacco, from the genus Nicotiana.

For centuries it was used by First Nation people in “religious practice, for medicinal purposes and recreationally”.

About a month ago, the Canadian government authorised the world’s first plant-based COVID-19 vaccine.

The key ingredient of the vaccine – a virus-like particle protein – is manufactured in the leaves of Nicotiana benthamiana, the ancient Australian chewing tobacco.

How can that be?

Nicotiana benthamiana has unique properties that make it a key research tool in virus research.

In 2014, it was being used to develop a potential treatment for Ebola.

Early in the pandemic, a number of European research bodies were using Nicotiana benthamiana as a bio-factory for “several experimental vaccines against SARS-COV-2”.

As an article at The Conversation rightly observes: Nicotiana benthamiana is “Australia’s most scientifically famous native plant, grown in labs around the world”.

Hang on, what are the unique properties?

According to a 2015 overview, from well before the pandemic, Nicotiana benthamiana was “the most widely used experimental host in plant virology, due mainly to the large number of diverse plant viruses that can successfully infect it”.

In other words, the plant is super vulnerable to becoming ‘sick’ – and not just with viruses.

It’s vulnerable to bacteria, fungi and oomycetes or ‘water moulds’, such as root rots and leaf blights.

This has made the plant a “cornerstone of host-pathogen research, particularly in the context of innate immunity and defence signalling”.

The great value of the plant is in helping scientists understand how to control diseases in crops.

But Nicotiana benthamiana also has “the unusual ability to express proteins of many foreign genes”.

And this is what makes it a terrific bio-factory for developing vaccines.

So there’s a new type of vaccine?

The weirdest thing about the new vaccine, the first to be developed in Canada, is its name: ‘Covifenz’.

According to a statement from Canada Health, which has authorised the use of the vaccine in adults 18 to 64 years of age, the technology synthesises the virus’s genetic code ‘‘so that its genetic instructions can be read by plants’’.

These genetic instructions are delivered into the plant. The plant then produces a non-infectious, virus-like particle protein that copies the target virus, in this case the SARS-COV-2 virus.

The plants quickly produce large quantities of these particles, ‘‘the most important ingredient in the vaccine’’.

Once injected into the body, the immune system recognises these harmless particles ‘‘as a virus that the body must protect itself against’’.

Through this process, as it goes with effective vaccines, your body ‘‘can mount a strong immune response against the spike protein without exposing you to SARS-CoV-2’’.

The Quebec-based company that developed the vaccine, Medicago, partnered with pharmaceutical giant GlaxoSmithKline with an adjuvant, a boosting agent to increase the efficacy of the vaccine.

How effective is it?

This was based on a two-shot regimen 21 days apart.

Canada Health said these studies were conducted while there were multiple variants in circulation, including Delta.

Since then, ‘‘preliminary and exploratory data shows that Covifenz produces neutralising antibodies against the Omicron variant’’.

Do we need another vaccine?

The first-generation vaccines, such as those from Pfizer, Moderna and AstraZeneca, have saved many lives, but infection rates remain high, and people keep dying.

So there is a need for vaccines that are more effective at reducing symptomatic disease, and are more versatile in combatting new variants.

Covifenz may prove to be all that, but it faces difficulties in getting easy access to the global market.

Medicago applied for an emergency use licence through the World Health Organisation, so it could gain access to foreign markets as well as to the COVAX vaccine sharing alliance.

But Dr Mariangela Simao, WHO’s assistant director general for drug access, vaccines and pharmaceuticals, said it was unlikely the vaccine would be approved.

Why? Because the WHO has strict policies about engaging with tobacco companies. And Medicago is partly owned by tobacco giant Philip Morris International.

Has Australia sold itself short?

Dr Wylie bemoans the fact that foreign researchers have been able to take samples of Nicotiana benthamiana overseas at no cost, effectively surrendering money-making opportunities via intellectual property.

Vaccines are one thing. But the Nicotiana genus, found in Western Australia and Northern Territory, is drought tolerant.

As Dr Wylie notes: “Stress-tolerance genes that evolved in the deserts of Australia could one day protect fields of wheat, maize, potatoes and other crops so fundamental to our survival.”

So, here’s a plant that might eventually save a water-poor world from starvation.

And we have effectively given it away.

Dr Wylie writes: ‘‘Most of Australia’s mineral heritage has been sold cheaply as unprocessed ore. Our international customers increase its value many-fold through innovative manufacturing. Then we buy it back.

‘‘Should we follow the same path with our genetic heritage so that one day Australian farmers will be forced to buy from overseas agricultural companies new drought-tolerant crop varieties sporting Australian genes?’’

Dr Wylie suggests that maybe it’s not too late to set up an intellectual property boundary. Well, maybe.