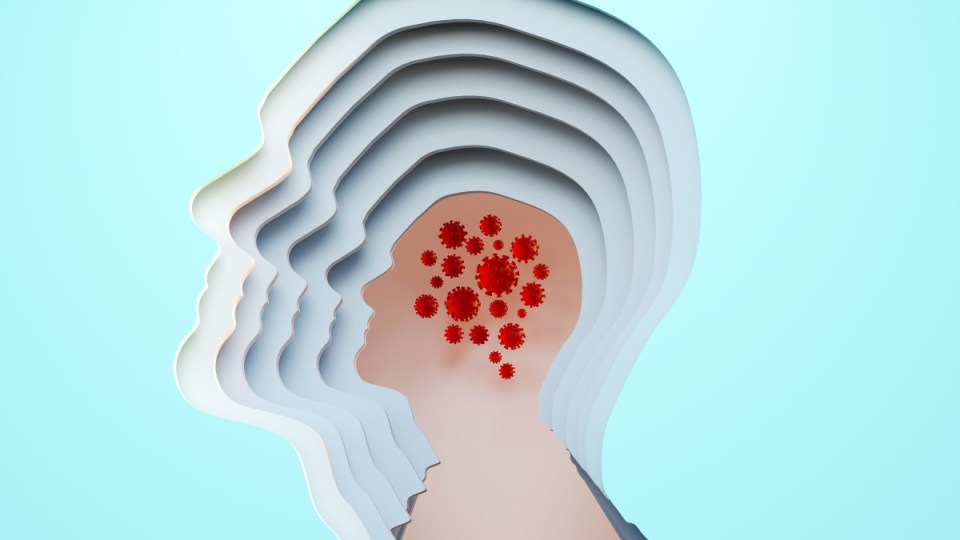 People who suffered even mild symptoms of COVID-19 were found to have lost up to 2 per cent of grey matter from their brain, a major study from Oxford University has revealed.

The researchers also found tissue damage in certain parts of the brain.

This suggests that the brains of some people infected with COVID-19 undergo accelerated ageing, at least temporarily.

It also suggests that COVID-19 might possibly be a new kind of neuro-degenerative disease. That is, this shrinkage may, in some cases at least, be an ongoing issue.

Whether this COVID-related brain shrinkage, and ageing, can be reversed isn’t yet known, but studies have suggested that ordinary loss of grey matter can be slowed through regular aerobic exercise.

How was this found?

The discovery was made when analysing before and after brain scans of 785 participants in the UK Biobank, a library of medical and other data from about half a million people.

People ordinarily lose between 0.2 and 0.3 per cent of their grey matter each year due to ageing, in areas related to memory.

But the brain scans revealed that COVID-19 patients lost an additional 0.2 to 2 per cent of grey matter in a matter of months.

Did it affect their thinking ability?

Grey matter are the neurons that process information in the brain.

If there was a significant and swift drop in volume, one would expect to see a slowdown in brain processing, as occurs in older people.

Indeed, study participants were given a number of cognitive tasks: Those who had been infected with COVID-19 were slower in processing information than those who had not.

This processing ability was correlated with volume in a region of the brain known as the cerebellum, indicating a link between brain tissue volume and cognitive performance in those with COVID-19.

The researchers say the findings, published in Nature, reveal “tissue damage and greater shrinkage in brain areas related to smell”.

A loss of smell has been a common complaint of COVID-19 patients. Whether it’s a temporary loss remains unknown.

Studies have established that COVID-19 has caused brain-related abnormalities, but most research has focused on hospitalised patients with severe disease. These studies have been limited to post-infection data.

The power of this new study, is the ‘before and after’ data.

More about the study

Professor Gwenaëlle Douaud and colleagues investigated changes in the brains of 785 participants in the UK Biobank, a large-scale biomedical database and research resource.

Participants were aged 51 to 81 and underwent two brain scans, on average 38 months apart, as well as cognitive tests.

A total of 401 participants tested positive for infection with SARS-CoV-2 between their two scans, of whom 15 were hospitalised.

The 384 participants who weren’t infected served as a control group: They were “similar to the infected group in age, sex, and many risk factors, including blood pressure, obesity, smoking, socio-economic status and diabetes”.

The study identified “a number of effects, on average four and a half months following infection, including a greater reduction in grey matter thickness in the regions of the brain associated with smell (the orbitofrontal cortex and parahippocampal gyrus)”.

The participants who had COVID-19 “also displayed evidence of greater tissue damage in regions connected with the primary olfactory cortex, an area linked to smell, and a reduction in whole brain size”.

The effects of SARS-CoV-2 on the brain in milder and more common cases “were unknown until now, and investigating these cases could reveal possible mechanisms that contribute to brain disease or damage”.

The authors say: “These findings may be the hallmarks of the degenerative spread of COVID-19, either via pathways related to the sense of smell, inflammation or immune response of the nervous system, or a lack of sensory input owing to a loss of smell.”

They advise: “Whether these effects persist in the long term, or are partially reversed, requires further investigation.”

A useful Conversation explainer about this new study and what it means can be found here.

COVID-19 could be a new form of Alzheimer’s

In a separate and unrelated study, a small number of patients who died of COVID-19 displayed “some of the same molecular changes found in the brains of people with Alzheimer’s disease”.

The findings, from Columbia University, could help explain the memory problems reported by sufferers of ‘long COVID’, though the researchers caution that only 10 patients were investigated.

“One interpretation of these findings is that long COVID could be an atypical form of Alzheimer’s,” Dr Andrew Marks, chair of the Department of Physiology & Cellular Biophysics at Columbia’s Vagelos College of Physicians and Surgeons.

He said the findings might suggests that “patients who had severe COVID could be predisposed to developing Alzheimer’s later in life”.

He said much more research needs to be done “before we can make more definitive conclusions”.