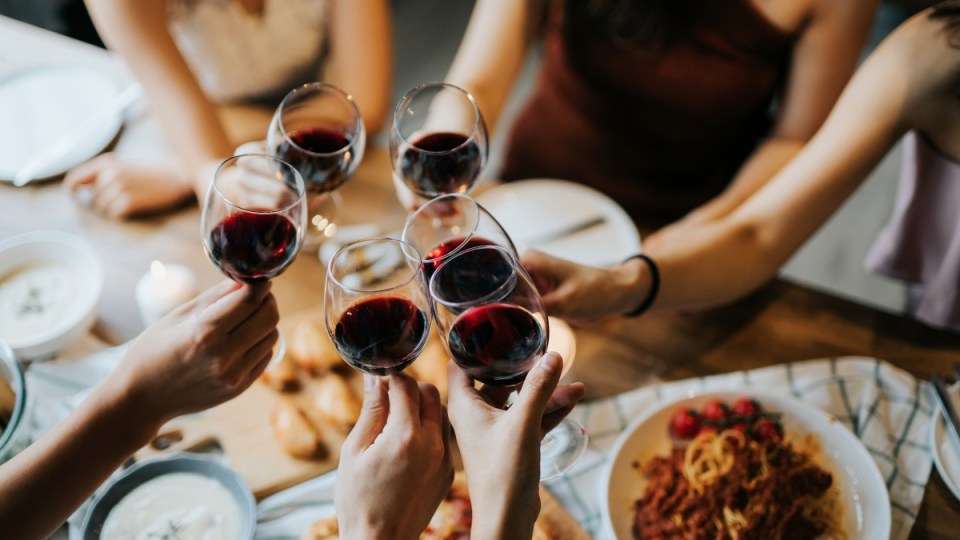 For the health benefits of wine, it has to be drunk with a meal. Photo: Getty

Can wine really protect against disease?

It’s an area of increasingly controversial research that shows no signs of slowing.

A new study of about 312,000 drinkers found that consuming moderate amounts of alcohol (a glass per day for women and two glasses per day for men), especially wine, was associated with a lower risk of developing type 2 diabetes.

But there are caveats. You need to be eating dinner while enjoying your booze.

In fact, the protection against type 2 diabetes “occurred only when people drank alcohol with meals, not when alcohol was consumed alone”.

The researchers further advise: “Only moderate amounts of alcohol” delivered the health benefit.

Wine was the real hero of this research:

But the researchers also caution that these results “are not a reason for non-drinkers to start consuming alcohol”.

The study was presented this week in Chicago at the American Heart Association Epidemiology, Prevention, Lifestyle & Cardiometabolic Health Conference.

An explainer from the association goes out of its way to be a party pooper, full of caveats as to why you should probably avoid booze despite the health benefits.

“The effects of alcohol consumption on health have been described as a double-edged sword because of its apparent abilities to cut deeply in either direction – harmful or helpful, depending on how it is consumed,” said study author Dr Hao Ma, a biostatistical analyst at the Tulane University Obesity Research Center in New Orleans.

In the last few years, there has been an arm of research that argues no amount of alcohol is good for you.

Last year, Oxford researchers advised there is no safe amount of alcohol consumption for the brain, with even moderate drinking causing the brain to shrink.

Diabetic non-drinkers to the test

In 2015, researchers from Ben-Gurion University of the Negev in Israel carried out a neat experiment that might not pass the ethics committee in these chiding times.

But it’s a more interesting and better-targeted study than the newer research.

Known as the “CArdiovaSCulAr Diabetes and Ethanol (CASCADE) randomized controlled intervention trial”, the participants were 224 patients with controlled diabetes (aged 45 to 75), who generally abstained from alcohol.

That’s right, diabetics who happened to be non-drinkers.

The participants were assigned at dinner time to drink five ounces (a standard glass) of either mineral water, dry white wine or dry red wine.

They also followed a Mediterranean diet without calorie restrictions.

They kept this up for two years.

There were blood tests and questionnaires throughout. The scientists tracked biomarkers of glycaemic control, lipids and liver function.

They were also the only group to experience a significant drop in components of metabolic syndrome.

For a bunch of diabetics, this was significant.

Metabolic syndrome is a cluster of conditions that occur together, increasing your risk of heart disease, stroke and type 2 diabetes.

In other words, if type 2 diabetics can be healthier from having a glass of red wine at dinner, you probably can be too.

Of course, talk to your doctor first etc, etc.

More evidence that wine may lower risk of type 2 diabetes