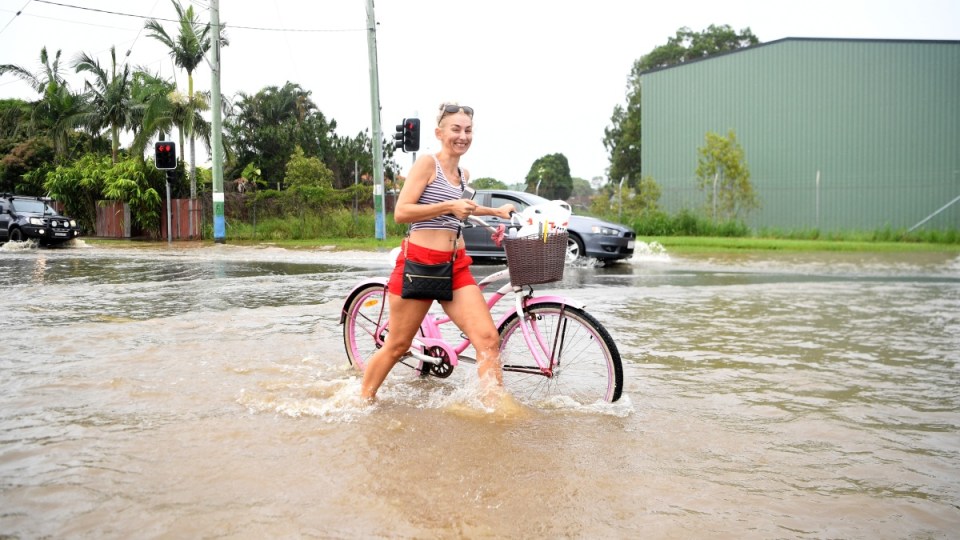 Parasites, petrol and poo are some of the dangers lurking in flood waters. Photo: Getty

The most immediate danger from wading through flood waters is being swept away and drowned.

This is possible even when the waters are relatively shallow but fast moving.

One slip and you’re gone.

It’s why experts advise never to drive, walk, or ride through water after flooding.

But the dangers don’t cease once the rain stops and the water begins to drain away.

As much as people are desperate to get back to their homes and check out the damage, wading even ankle-deep in pooled and still flood water carries significant risks.

When you return home, it isn’t just water you’ll be wading through.

Raw sewage is probably the most common contaminant.

The poop-loving parasites Cryptosporidium and Giardia, and the bacteria E. coli and salmonella, are some of the common contaminants found in flood water that cause different forms of gastroenteritis.

These bacteria and parasites, and assorted viruses, thrive in untreated water.

You need to swallow contaminated water to contract gastro, which is more likely if you’re mucking around in standing water as if it’s a swimming pool.

However, you’re also vulnerable to gastro if you neglect to thoroughly and frequently wash your hands.

Do not drink tap water without boiling it first unless public health authorities have given it an all clear.

A rare disease not so rare in flood waters

Leptospirosis is a rare bacterial disease that spreads through the urine of infected animals, including mice, rats, cattle and marsupials.

But a fact sheet from the federal government advises leptospirosis outbreaks “frequently occur in the summer months and after heavy rainfall and flooding”.

Leptospira bacteria can survive in soil and fresh water for weeks to months.

The bacteria enters the body through broken skin, or the lining in the mouth, eyes and nose by exposure to water, soil or mud contaminated with the urine of infected animals.

The Australian Journal of General Practice advises that Leptospirosis is “sometimes misdiagnosed” with other flu-like illnesses.

This is a problem.

Delays in treatment “could increase the risk of severe complications, including pulmonary haemorrhage, acute renal failure and acute liver failure”.

In some cases, it has proved fatal.

An article from The Conversation advises that after the floods in 2011, Queensland reported a nearly 65 per cent increase in the number of cases of Leptospirosis, most of which occurred in the weeks after the floods.

The article also advises that Leptospirosis “is also a risk for suburban dogs and can be fatal”.

Walking through flood waters with punctured or scratched skin can lead to serious infections. Leptospirosis is one of them.

You’re also vulnerable to infecting your wound with Staphylococcus aureus or ‘golden staph’ bacteria, which are commonly found on the skin and in the nose.

Once it enters the bloodstream, via a wound, a serious infection tends to follow, featuring fever and low blood pressure.

Internal organs such as your brain, heart or lungs can be affected.

Aeromonas is another bacteria that causes skin and soft tissue infection. It lurks in standing water.

Commonly suffered in the 2011 floods in Queensland was cellulitis, a deep infection of the skin caused by bacteria.

It usually affects the arms and legs. It can also develop around the eyes, mouth and anus, or on the belly.

Sometimes bacteria from cellulitis spread into the bloodstream, which is called sepsis. This is a medical emergency.

When cleaning up after floods, try to avoid getting wounds wet by using protective equipment, because even minor wounds are entry points for bacteria.

Seek medical care if you develop any infections after exposure to mud or flood waters.

Chemicals and toxic gases may be lurking

If you live near an industrial area, or even a service station, toxic gases, such as methane and sulphur dioxide, and industrial carcinogenic chemicals like benzene, can pollute the water you’re walking through.

Industrial sites commonly contain dioxins, lead, arsenic and mercury, all of which gets into the water and can travel into residential areas. These compounds can cause serious health issues in the brain, blood and kidneys.

Natural gas and other fuel lines can be broken in a flood.

Entering a flooded house can leave you exposed to poisonous or flammable gases, and household chemicals, like caustic drain cleaners and chlorine bleach in the soggy carpet.

It’s not only people that get displaced in a flood. Animals do, too.

A koala hiding in the larder can give you a nasty scratch.

Snakes, though, are more likely visitors: They’ll seek shelter and food in areas close to people.

The inside of homes, storage sheds and other buildings are popular hiding spots for snakes. Keep this in mind when opening doors and cupboards.

Remember, you’ll be feeling anxious and perhaps distracted when your full attention is required.

Dangers of wading through flood waters: What to keep in mind when returning home