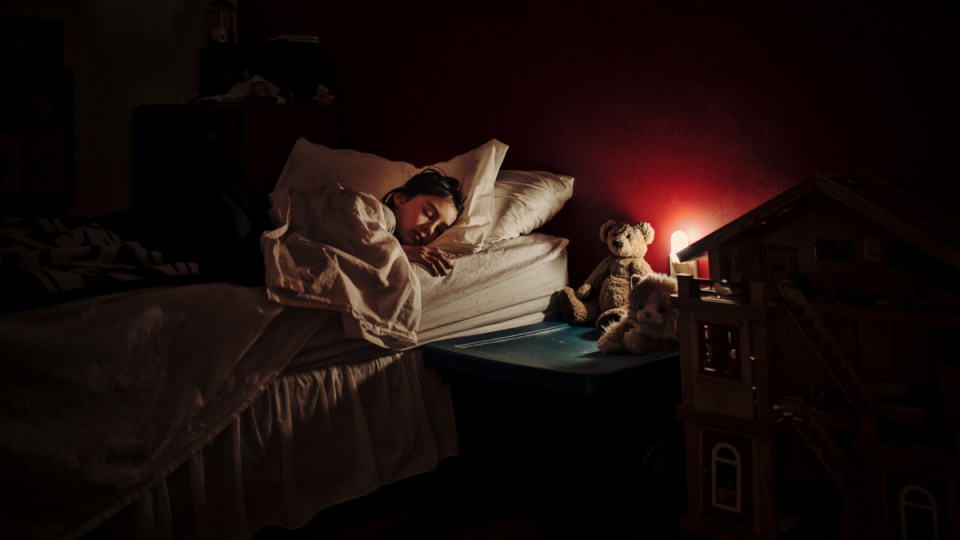 Exposure to light in the hour before bedtime can send melatonin levels plummeting.

When a small child keeps getting out of bed and wandering out into bright light, they are essentially powering themselves to keep waking up and claiming the night.

The problem is, the central body clock of children is much like their taste buds: Very sensitive to stimulation.

New research finds that “even slight exposure to light can prompt the critical sleep-promoting hormone melatonin to plummet in pre-schoolers in the hour before bedtime”.

It’s this dynamic that potentially disrupts sleep “long after the light goes out”.

First author Dr Lauren Hartstein, a postdoctoral fellow in the Sleep and Development Lab at Colorado University Boulder said: “Our previous work showed that one, fairly high-intensity bout of bright light before bedtime dampens melatonin levels by about 90 per cent in young children.”

With this study, she said, “we were very surprised to find high melatonin suppression across all intensities of light, even dim ones”.

Is this the end of the nightlight?

Dr Hartstein, perhaps sensitive to potentially millions of little voices squealing in outrage, said the study findings don’t “necessarily mean that parents must throw away the nightlight and keep children in absolute darkness before bedtime”.

However, she said that with many small children using screen media before bedtime, “the research serves as a reminder to all parents to shut off the gadgets and keep light to a minimum to foster good sleep habits in their kids”.

In other words, do what you can.

The power of the light

Light is like a switching mechanism alarm clock for the body’s circadian rhythms that “regulate everything from when we feel tired or hungry to what our body temperature is throughout the day”.

When light hits the retina, a signal transmits to a part of the brain called the suprachiasmatic nucleus, which co-ordinates rhythms throughout the body, including nightly production of melatonin.

If this exposure happens in the evening as melatonin is naturally increasing, “it can slow or halt it, delaying the body’s ability to transition into biological night-time”.

The question for the researchers was to what extent does melatonin production slow down in young children.

For seven days, parents kept the children on a stable sleep schedule to normalise their body clocks and settle them into a pattern in which their melatonin levels rose about the same time each evening.

On the eighth day, researchers transformed the children’s home into a “cave” – with black plastic on the windows and lights dimmed – and took saliva samples every half hour starting in the early afternoon until after bedtime.

This enabled the scientists to get a baseline of when the children’s biological night naturally began and what their melatonin levels were.

On the last day of the study, the young study subjects were asked to play games on a light table in the hour before bedtime, a posture similar to a person looking at a glowing phone or tablet.

Light intensity varied between individual children, ranging from five lux to 5000 lux. (One lux is defined as the light from a candle a metre away.)

When compared to the previous night with minimal light, melatonin was suppressed anywhere from 70 per cent to 99 per cent after light exposure.

Surprisingly, the researchers found little to no relationship between how bright the light was and how much the key sleep hormone fell.

In adults, this intensity-dependent response has been well documented.

Even in response to light measured at five to 40 lux, which is much dimmer than typical room light, melatonin fell an average of 78 per cent.

And even 50 minutes after the light extinguished, melatonin did not rebound in most children tested.

“Together, our findings indicate that in preschool-aged children, exposure to light before bedtime, even at low intensities, results in robust and sustained melatonin suppression,” Dr Hartstein said.

What parents can do