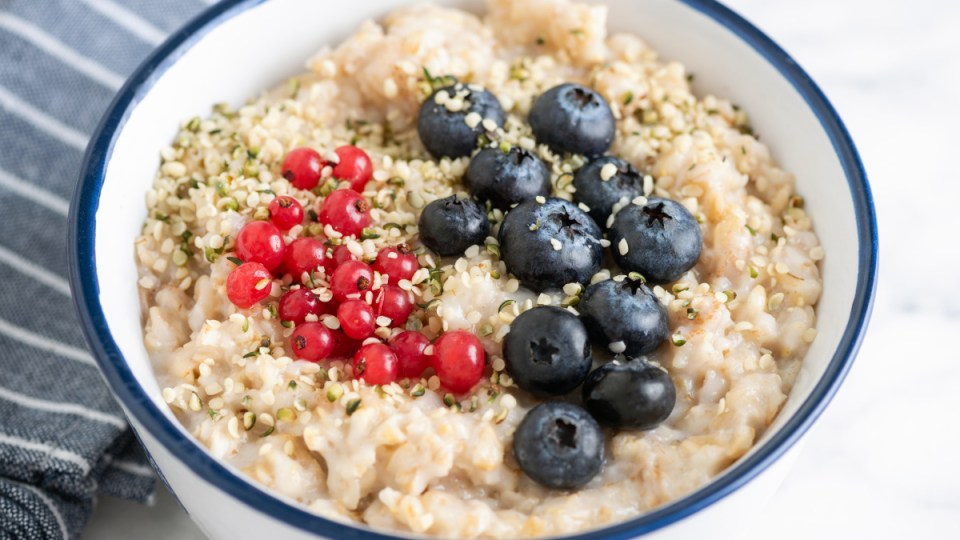 Breakfast, lunch or dinner: Hemp seeds can be used like any other seeds or nut. Photo: Getty

About four years ago, Australian legislation allowed hemp seeds to be sold as food for human consumption. Local farmers have reportedly been playing catch-up with demand.

In October, Inside FMCG (fast-moving consumer goods) reported that Woolworths was about to list products from a Byron Bay hemp foods company in 100 stores, suggesting that hemp foods “are moving mainstream”.

In fact, hemp seed powder has been a resident of the health food section of supermarkets for some time.

Still, it’s taken a while to convince mum and dad consumers that eating foods made from hemp seed won’t get them high.

Industrial hemp is a class of cannabis sativa that contains no more than 0.3 per cent tetrahydrocannabinol (THC), the primary psychoactive compound in cannabis plants.

Hemp seeds are not only ‘safe’, they’re hyped as being incredibly nutritious – but is it true? It is.

An investigation by CHOICE magazine found “hemp seeds have an impressive nutritional resumé”.

This includes vitamin E, folate and thiamine, along with minerals including phosphorus, potassium, magnesium and iron.

With more people looking for ways to increase the plant-based component of their diet, hemp seeds – sprinkled on your breakfast oats or avocado, your salads, and powdered for smoothies – is an easy way to get a powerful dose of nutrition.

Technically a nut, they do have a mild nutty taste.

A complete source of protein

Being a complete source of protein means hemp seeds provide all nine essential amino acids, the building blocks for all proteins.

Relatively few plant-based foods are complete sources of protein, and this is one reason why hemp seeds are being talked up.

Hemp seeds are rich in an amino acid called arginine, which is beneficial for your heart.

The digestibility of hemp protein is also very good — better than protein from many grains, nuts and legumes

Hemp seeds are a great source of essential fatty acids, such as alpha-linolenic acid (ALA), which is an omega-3.

We tend to eat too many omega-6s and too few omega-3s: adding hemp seeds to the diet appears to promote a healthy balance.

The evidence? In a 2015 study, hemp seeds were fed to chickens that laid eggs with “increased levels of omega-3s in the yolks and a more healthful omega-3 to omega-6 ratio”.

The healthy omega-3 to omega-6 ratio is said to reduce inflammation.

Catherine Saxelby, accredited nutritionist and dietitian and founder of Foodwatch, told CHOICE:  “The most beneficial attribute of hemp is probably the high omega-3 content of its oil.”

She notes though that the plant form of omega-3 isn’t well absorbed, particularly when compared to fish oil.

Hemp seeds can also reduce the amount of cholesterol in the body. How? The seeds contain phytosterols, a group of naturally occurring compounds found in plant cell membranes.

Because phytosterols are structurally similar to cholesterol, when they are consumed they compete with cholesterol for absorption in the digestive system.

Soluble fibre forms a gel-like substance in your gut. This serves as food ‘healthy’ digestive bacteria. It also appears to reduce spikes in blood sugar and regulate cholesterol levels.

Insoluble fibre adds bulk to your stool and eases the journey of food and waste through the gut.

Hemp seeds contain about five per cent fibre and some people may experience gas, bloating or diarrhoea if they consume too much too quickly.

Pregnant women and people with food allergies should discuss hemp seeds with their doctor before including them in their diet.