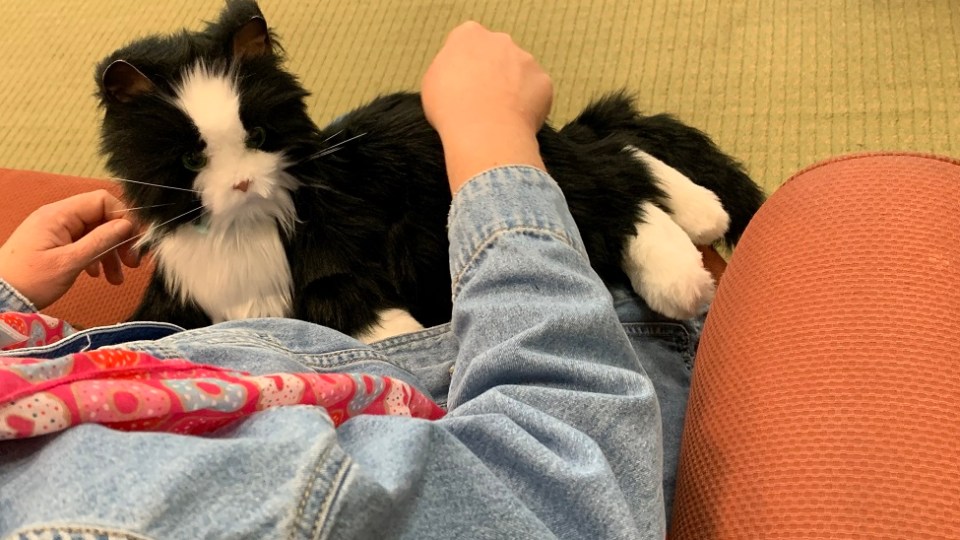 Study participants said their pet cats were someone who listened to them and loved them. Photo: Florida Atlantic University

There’s plenty of evidence that the companionship of a dog, or some other animal, can be an effective alternative to drugs when treating anxiety and depression in dementia patients.

According to a useful tip sheet from Dementia Support Australia, engagement with animals and pets can help dementia patients to express their emotions, feel validated and have a sense of purpose in caring for the animal.

In other words, animals sometimes achieve what the company of family and friends cannot.

Why? The mere presence of an animal can have a calming effect on the agitation, aggressive behaviour, restlessness, social withdrawal and disorientation that dementia patients routinely demonstrate.

In a care setting, therapy dogs are specially trained and under the control of a handler – and it’s commonly held that these formal structures are necessary for patients to get the most out of the experience.

At the very least, the animals have to be living, breathing creatures, right? Not necessarily.

A fascinating new study – from Florida Atlantic University’s College of Nursing – has found that affordable, interactive robotic pet cats can help to improve mood, behaviour and cognition in older adults with mild to moderate dementia.

Patients believed the robots loved them

In the study, 12 patients attending an adult daycare centre were given a robotic cat as a pet. The participants were told that “their pet was a robot and not a live animal”.

Each of them selected a name for their cat, which was fitted with a collar and a personalised nametag. Patient and pet were observed over 12 visits.

Before and after the intervention, the researchers’ assessed the mood and behavioral symptoms of participants using the Alzheimer’s Disease and Related Dementias Mood Scale, the Observed Emotion Rating Scale and the Cornell Scale for Depression in Dementia. They also assessed cognition via the Mini Mental State Examination.

Results showed that engaging with a robotic pet cat improved all mood scores over time, with significant improvements in the Observed Emotion Rating Scale and the Cornell Scale of Depression in Dementia.

More than half of the participants scored higher on the Mini Mental State Examination post-test than pre-test, with slight to moderate improvement in attention/calculation, language and registration.

The benefits of robot love

Researchers frequently observed study participants “smiling and talking to their robotic cats and expressing sentiments such as, ‘The cat is looking at me like someone who listens to me and loves me’.”

They believed that the robotic pet “was responding to their statements through meowing, turning their head or blinking their eyes and that they were having a conversation with the pet”.

Several of the caregivers reported their loved ones had slept with the cat, held on to the cat when sitting or consistently played with the cat. One participant even slept with her robotic pet cat while she was hospitalised.

“Since there is no cure for dementia, our project offers a way to address symptoms naturally and without the use of pharmacological treatments, which may or may not be effective and have possible detrimental side effects,” said Dr Bryanna Streit LaRose, lead author who conducted the study as a doctoral nursing student.

“Our intervention was affordable, safe, and non-invasive.”