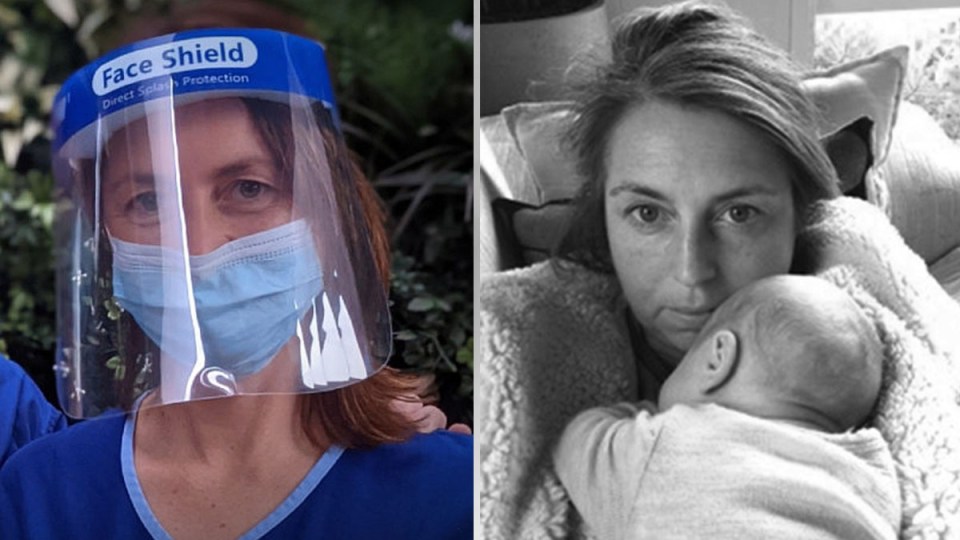 Dr Alex Umbers is speaking up about miscarriage to help other mothers. Photo: Alex Umbers

It was early in Victoria’s first lockdown, coronavirus was just hitting her regional hospital, and doctor Alex Umbers faced a choice — keep working to save lives, or prioritise one that had not fully begun.

She followed her gut. Took off the PPE. Took down the scrubs that hid her swelling belly. Left the ward.

“At that time, a lot wasn’t known about COVID and pregnancy,” Dr Umbers said.

“I was really personally conflicted between my duties as a doctor, to the community – to provide care when other people were going through hard times – and also wanting to protect this precious, precious baby.”

The fears were not unfounded. Nearly two years into the pandemic, research is showing that pregnant women who contract the coronavirus are three times more likely to end up in intensive care.

Studies are also under way into the impact of COVID-19 on stillbirth rates.

Dr Umbers has recently treated a pregnant woman with coronavirus and, now double vaccinated and with a healthy baby at home, she feels safer even as she braces for the “inevitable” surge in patients when lockdown rules further ease.

Last year, she wasn’t sure she’d get to this point.

The doctor put on a brave face for patients as Victorian cases climbed. But her mind was travelling back a year, to the day her other baby’s heart had stopped beating.

Her mind was back in the hospital room where she laboured for hours to give birth to the child she had carried for 17 weeks, knowing she and her husband would never hear their newborn cry.

That “horrific” late miscarriage had been one of a series over three years.

“I was always worried. It was on the forefront of my mind – will my waters break early? Will I bleed?” she said.

“You never really let yourself enjoy the pleasure and privilege of being pregnant again because you’re just so caught up in what can go wrong.”

The need for support

Dr Umbers had not felt comfortable explaining to her boss why she needed time off after each miscarriage.

She called in sick after the labour and was asked to organise evidence from a GP before her work would give her an exemption from night shift while her body recovered.

Women and men can now access two days of paid leave for miscarriages – even those that occur before 12 weeks since conception, after federal legislation passed in June.

That ruling followed a similar move by New Zealand and local campaigning from mothers at advocacy group The Pink Elephants Support Network.

Public servants in New South Wales are now entitled to five days of leave, while private companies including financial giants such as Westpac and PricewaterhouseCoopers have announced early pregnancy loss policies.

Monash University’s Dr Jade Bilardi is researching the uptake of the leave and said it was important bosses made it accessible to women as well as their partners.

She is another mother who has carried a silent grief, traumatised further by a lack of support following a miscarriage.

While also emphasising there was kindness from many health staff who helped her after multiple miscarriages, Dr Bilardi is still shaken by the blunt words of a sonographer who was performing an ultrasound to check on the health of one of her first pregnancies.

“That was it – and I had to get myself up and get dressed … the minute she left the room I burst into tears. I was sobbing.

“It was a very surreal moment, one of those out-of-body experiences. It didn’t need to happen that way.

“That’s something that really has stuck with me because there are kinder ways to deliver that news.”

Normalising the conversation around pregnancy loss

That experience has spurred on the Melbourne mother to dedicate the past six years to research into pregnancy loss.

At least 15 per cent of confirmed pregnancies in Australia will result in miscarriage.

Dr Bilardi and her colleagues from the University of Melbourne note that the actual rate may be much higher, with some studies suggesting it could be as many as one in three pregnancies.

Doctors Umbers and Bilardi are determined to speak up about experiences of pregnancy loss to help normalise the conversation.

“We need to be talking about it so that people don’t feel so alone and isolated in their loss,” Dr Bilardi said, noting that up to 50 per cent of women will experience clinical anxiety after pregnancy loss, while they and their partners can also suffer post-traumatic stress disorder (PTSD).

Dr Umbers said she wishes she spoke up earlier about her experiences.

“Because the pregnancy was complicated or we were afraid we were going to lose various pregnancies we kept it quiet,” she said.

“I wish I could have talked about our experience more so that people close to us could have understood how vulnerable we were.

“You lose your hopes and your dreams.”

Dr Umbers has found her voice, and helped give other women a platform to share their experiences, on a podcast project called Pregnancy Uncut.

She’s joined by her colleague, obstetrician Kara Thompson, who had also struggled while going through IVF before welcoming three daughters.

“We deal with this every day and yet we still didn’t feel we could talk about it – there’s still some degree of stigma and shame around pregnancy complication,” Dr Thompson said.

Dr Umbers added: “No one wants to be the face of pregnancy loss, but I think the story is not just our story”.

And if not even doctors who deal every day with parents and newborns can broach the subject, what kind of message would that send to other families?

On Friday night, Dr Umbers and her husband – along with their “delightful” lockdown arrival, baby Solomon – will join other parents in lighting a candle to mark International Pregnancy and Infant Loss Remembrance Day.

“We have a special place where we commemorate Soli’s older siblings. He’s our only son, but he’s not our only child,” she said.

Keeping mum no more: Breaking the silence on miscarriage