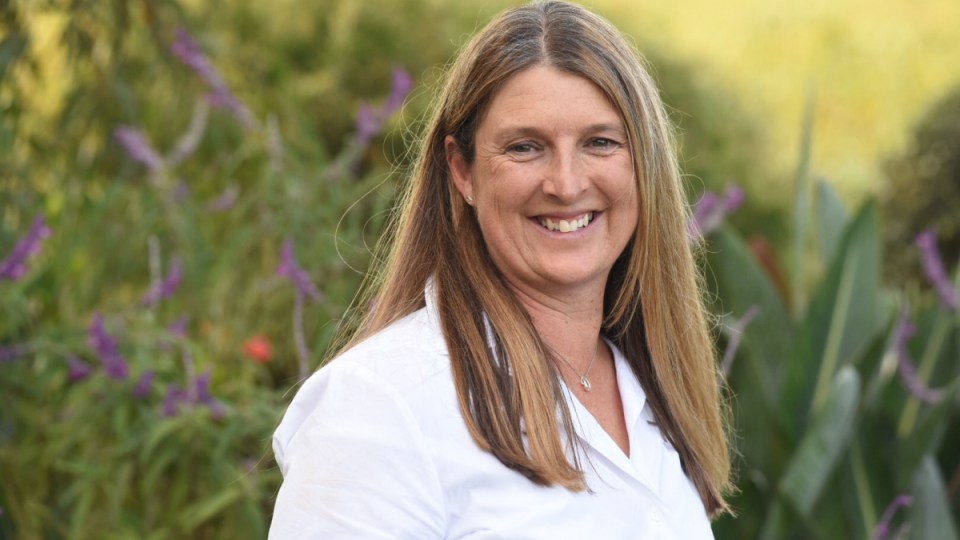 About 65 per cent of Australian women believe there is an early detection test for ovarian cancer. If only there was.

Kel Pittman was first diagnosed when she was 43. But for nine months before that, to explain her bloating, doctors thought Ms Pittman that was suffering irritable bowel syndrome.

And this is how it is for women and their doctors. There is nothing as concrete and reliable as a lump or a poo test to indicate ovarian cancer. None of the symptoms are particularly alarming, on the face of it.

Ms Pittman is now 49. She is the mother of a 15-year-old girl and a boy, 12. Throw in dad and they all make a beautiful family photograph together.

Miss Pittman is a delight to talk to, laughs easily. What a great school teacher she’d be: an easy favourite with the kids, you’d imagine.

At the moment she is on estrogen blockers to “keep it all at bay.”

She says: “My cancer is fed from estrogen. If I have no estrogen in my body then that’s the best scenario.”

It’s not exactly the last-ditch stand as a treatment, but it’s close to it.

“We’ve really only got one chemo treatment left,” Ms Pittman says. “Because my body is becoming resistant to chemo.”

The idea is to stick with the blockers “for as long as we can, because that last chemo will be it. There is nothing else they will be able to do after that.”

According to the the Ovarian Cancer Research Foundation, more than 1800 Australian women will be diagnosed with ovarian cancer this year. By 2025, about a thousand of those women will be dead.

So strictly by the numbers, Ms Pittman is doing better than most. She was speaking to The New Daily to give a human face to a complicated problem, as revealed in a startling new survey out of the University of Melbourne.

Most Australian women believe there is an early detection test for ovarian cancer, and that when they go for a pap test they’re being automatically screened for the most lethal of gynaecological malignancies.

Neither of these assumptions – discovered in a recent survey –  is true, and they’re putting lives at risk.

The survey, by the Ovarian Cancer Research Foundation and the Melbourne School of Psychological Sciences found that:

Further, in a conversation with me in Episode 5 of What Does That Mean? – The New Daily‘s podcast series – Dr Cassie Hayward said that three out of four women under the age of 30 believe that the HPV vaccine was protecting them from ovarian cancer.

The problem here, as Dr Hayward – a senior lecturer at the Melbourne School – is that detecting ovarian cancer in its early stages is pretty much up to women being vigilant with what’s going on with their bodies, and with pursuing any warning signs with their GPs.

From there, they are subject to a series of invasive diagnostic tests

The difficulty is that many of the warning signs – abdominal pain or pressure, sudden abdominal swelling, weight gain or bloating, unexplained weight loss, low backache or cramps, and unusual feelings of fullness, gas, nausea or indigestion – can be easily dismissed as indicators of everyday un-wellness.

“A lot of women are thinking that their regular female health checks are going to pick up something like ovarian cancer, and that’s not going to happen,” said Dr Hayward in the podcast interview.

“And there’s the problem that a lot of the warning signs … are not things that will lead women to think there’s something seriously wrong with them.”

As Kel Pittman told me in our phone interview: “It’s just what women experience all the time. It doesn’t set off any alarms. I think the fact is you don’t now that it could be ovarian cancer. That’s not even a consideration.

“If you had a headache for a month, you’d think ‘oh, something’s going on with my head. I better get it checked out.’ But when you have (ovarian cancer symptoms) you think, ‘That’s just because I’m a female, and I’ll get on with it.’ So you don’t go to your GP and say ‘I’ve had these symptoms…’ – a lot of women, like me, are diagnosed with irritable bowels syndrome.”

The survey reveals that women need to be educated in the realities of ovarian cancer, but also about their gynaeological makeup. One of the prevailing confusions appears to be mistaking the ovaries for the cervix, or perhaps bundling these two organs together.

Dr Hayward suggests that education could occur when girls are vaccinated against the HPV during high school years.

Less than one in five cases of ovarian cancer can be linked to specific gene mutations.

The BRCA gene test is offered to those who are likely to have an inherited mutation based on personal or family history of breast cancer or ovarian cancer. The  test isn’t routinely performed on people at average risk of breast and ovarian cancers.

Outside of genetic pre-dispositon, there is no known cause for the remainder of ovarian cancer cases.

Dr Hayward said an early detection test would improve five-year survival rates from 46 per cent, to more than 90 per cent. While developing such a test remains a prime focus of ovarian cancer research groups, and despite some promising developments, we’re nowhere close to actually obtaining one.

The research was an online survey conducted by the University of Melbourne and the Ovarian Cancer Research Foundation between 17 April and 24 April 2020, among a nationally representative sample of 494 women aged 18 years and older.

For more on this story, listen to episode five of What Does That Mean? podcast:

Half of all women believe there’s a vaccine for ovarian cancer. There isn’t