Veganism has soared in popularity around the world, and data shows that Australia is at the forefront of the shift towards plant-based eating.

Interest in veganism around the world has doubled over the past five years, and shows no signs of slowing down, according to research by culinary website Chef’s Pencil.

Australia is the second-most popular nation in the world for vegans in 2020, behind only the UK, according to Chef’s Pencil’s latest annual index of the the most popular countries and cities for veganism around the world. 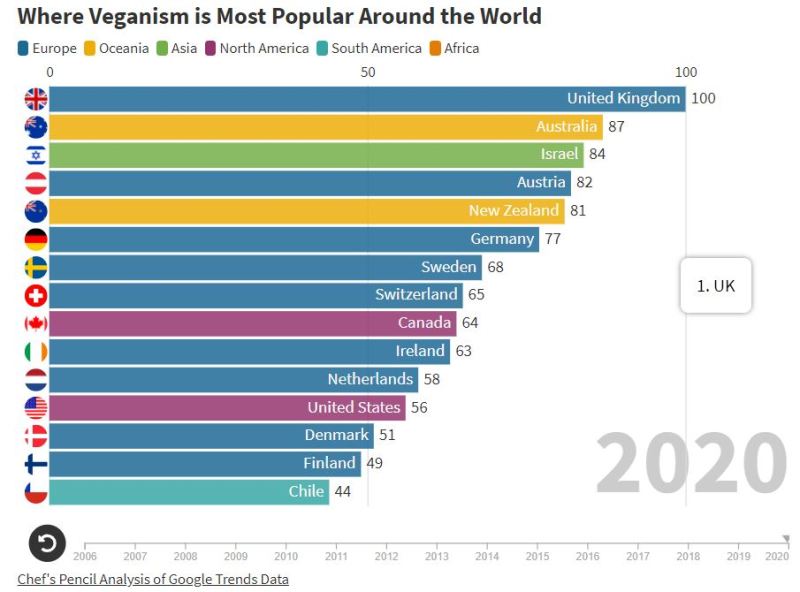 To compile the index, Chef’s Pencil analysed Google Trends data and found that vegan-related searches in any language (e.g. “veganism”, “vegan restaurants”, “vegan rezepte”) were at an all-time high in 2020, surpassing the all-time high registered in 2019.

Australia has one of the largest vegan communities worldwide, and interest in veganism continues to be fuelled by environmental concerns, researchers found.

“Climate change and its severe impact on Australia felt through extreme heatwaves has only added to the debate about farming and meat consumption,” they said.

“As a result, meat consumption has started to decline in Australia, though Australians still consume more meat per capita than pretty much most of the world.”

Instead of slowing the rise of veganism, the coronavirus pandemic has accelerated it, Chef’s Pencil found.

“Searches for vegan recipes have soared and are still going very strong, although lockdown has ended in most parts of the world,” the firm said.

“And ImpossibleFoods, one of the top producers of plant-based dishes, has announced record sales.”

Despite their concern for the environment and animal welfare, Generation Z has turned up its nose at the thought of lab-grown meat.

The consumer power of Generation Z (born between 1995 and 2015) is growing, but they view lab-grown meat “with disgust”, a new Australian study has shown.

Gen Z, or ‘zoomers’, account for 20 per cent of the Australian population, and two billion people globally.

They are concerned about the environmental impacts of traditional livestock farming, but most aren’t ready to embrace cultured meat, research by the University of Sydney and Curtin University published in Frontiers in Nutrition on Thursday showed.

Nearly three-quarters (72 per cent) of Generation Z  said they would not eat cultured meat – defined in the survey as a lab-grown meat alternative produced by in-vitro cell cultures of animal cells – instead of meat from slaughtered animals.

“Our research has found that Generation Z – those aged between 18 and 25 – are concerned about the environment and animal welfare, yet most are not ready to accept cultured meat and view it with disgust,” said the study’s lead researcher, Dr Diana Bogueva from the University of Sydney’s School of Chemical and Biomolecular Engineering.

Although unwilling to put lab-grown pork on their forks, 41 per cent of zoomers surveyed said they believed cultured meat could be a viable alternative source of nutrition because of the need to transition to more sustainable food options and improve animal welfare.

“In-vitro meat and other alternatives are important as they can help to reduce greenhouse emissions and lead to better animal welfare conditions,” Dr Bogueva said.

“However, if cultured meat is to replace livestock-based proteins, it will have to emotionally and intellectually appeal to the Gen Z consumers.

“It may be through its physical appearance, but what seems to be more important is transparency around its environmental and other benefits.”

The research shed light on what was driving negative attitudes towards  lab-grown meat, with common concerns including an anticipated taste or disgust, health and safety.

Australia’s reputation as a nation of meat producers and eaters also played a part.

“Gen Z value Australia’s reputation as a supplier of quality livestock and meat, and many view traditional meat eating as being closely tied to concepts of masculinity and Australian cultural identity,” Dr Bogueva said.

The survey also revealed sceptical attitudes towards lab-grown meat, with some respondents saying they believed cultured meat was a conspiracy orchestrated by the rich and powerful and were determined not to be convinced to consume it, while others said they were unsure whether it was an environmentally sustainable option.

“This generation has vast information at its fingertips but is still concerned that they will be left with the legacy of exploitative capitalism that benefits only a few at the expense of many,” Dr Bogueva said.

“They have witnessed such behaviour resulting in climate change and are now afraid that a similar scenario may develop in relation to food, particularly as investors are pursuing broader adoption of cultured meat.”